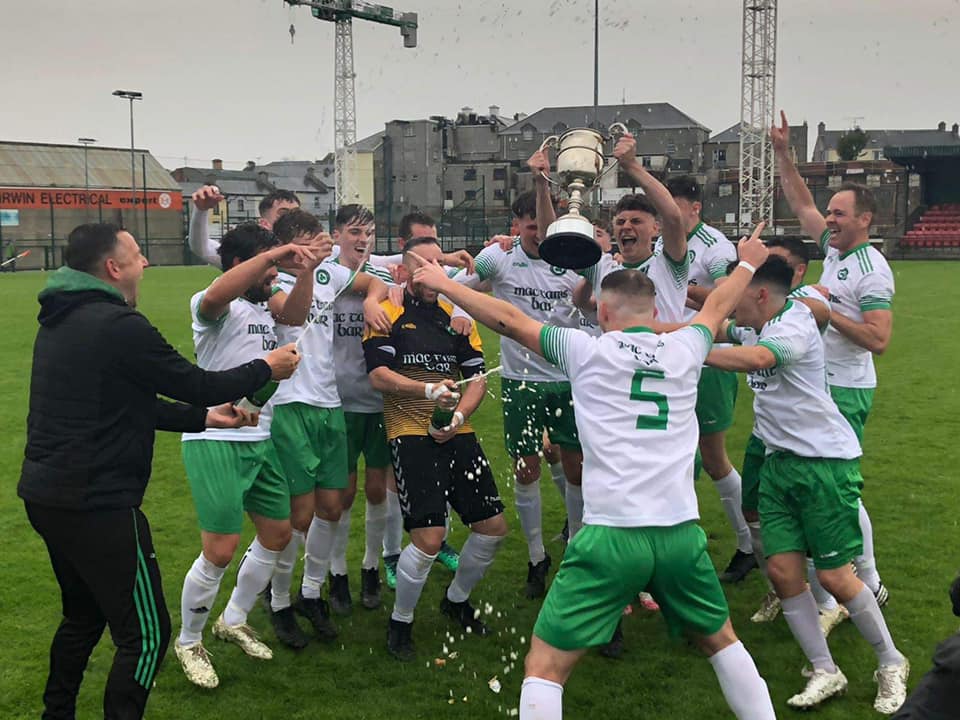 AS MANY expected, Clonmany cruised to Fr O’Gara Cup success and completed a treble success over Rasheney at a rain soaked Maginn Park on Saturday.

Whatever chance Rasheney had of an upset evaporated when Clonmany scored twice in the opening five minutes.

Steve Harkin slipped the ball through a static defence for Jason Devlin to slam the ball low past Paddy McGilloway.

Then Devlin raced through the defence to slide the ball low past McGilloway from 15 yards.

McGilloway blocked a Pearse McCarron effort after a good move ended with McCarron clear inside the area.

Rasheney tried to get back into it and on 23 minutes  an in-swinging Charlie Doherty free just eluded Conor McDaid at the back post.

Clonmany resumed in control with a Ferghal Harkin free clipping the bar before Devlin completed his hat trick with a glancing header from a Matthew Brennan cross.

McGilloway made further saves to deny Devlin and McCarron.

On the stroke of half time Rasheney went close after Doherty’s snapshot was well saved by Patrick Harkin and when Cormac Dillon flashed the loose ball across goal there was no one there to take advantage.

Rasheney had the opening chance in the second half after Shane Cregan found space inside the area and saw his looping effort drift past the far post.

At the other end a right footed looping effort from Devlin was brilliantly tipped over by McGilloway. Minutes later, Devlin collected a superb pass from keeper Harkin and saw an effort crash off the bar.

Rasheney, to their credit, battled gamely and both David Mclaughlin and McDaid were off target with efforts around the hour mark.

Devlin latched onto a ball over the top and when he was forced wide the ball fell into substitute Mark Mclaughlin’s path but he blazed over.

Clonmany kept pressing and when Oisin Hession played a one two with McLaughlin his effort was again saved by McGilloway.

The Shamrocks completed the scoring on 84 minutes after McLaughlin displayed deft footwork on the edge of the area and fired a superb left footed shot low to the corner.