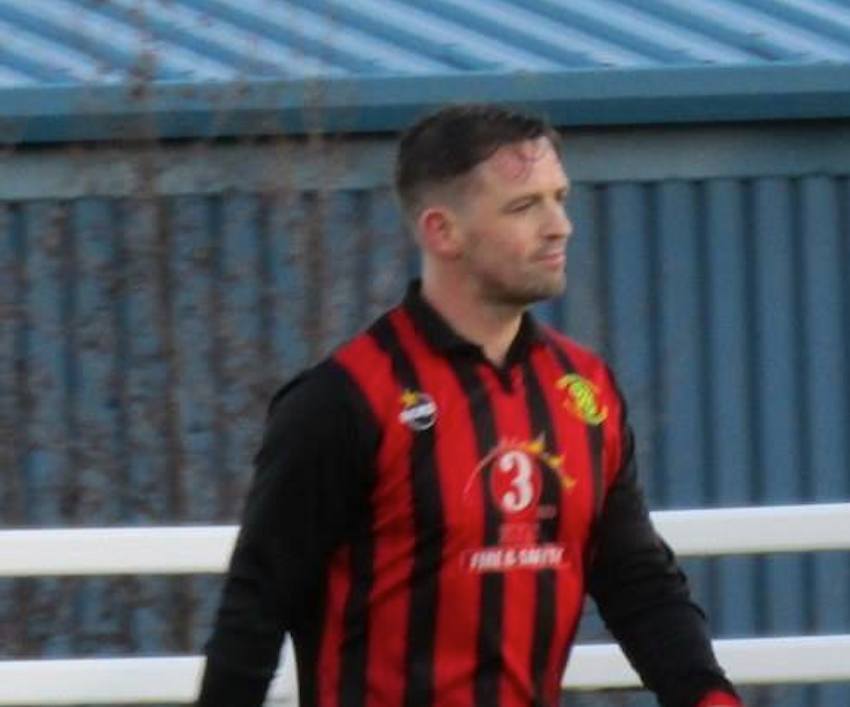 KEVIN McHugh struck twice in the dying moments as ten-man Kildrum Tigers came from behind to edge Kilmacrennan Celtic in a pulsating Brian McCormick Sports Cup semi-final in Ballyare.

McHugh’s brace, on 84 and 96 minutes, came after extra time seemed a distinct possibility when Rab Sandilands and Daniel Clarke swapped cracking goals at either end.

The former Finn Harps star proved the difference with two expert finishes to drive Kildrum into the decider.

With six minuets to go, Kildrum – who had Luke Toland controversially sent off in the 74th minute – broke from a Kilmacrennan corner and McHugh was fed on the right channel. From the moment the veteran attacker got possession, the outcome seemed inevitable. McHugh’s stride quickened as he surged away and, despite the narrow angles, drilled into the far corner.

Deep into injury time, McHugh broke again and found the same corner to seal the deal and fire Kildrum into Sunday’s final against Cappry, who booked their spot thanks to a 4-1 win over Bonagee United yesterday.

It was a rip-roaring contest, even if chances were few in the opening half.

Just three minutes before the break, Sandilands let go with a stunning effort from just outside the left-hand edge of the box that flew into the roof of the net.

Kildrum levelled on 68 minutes thanks to an equally-impressive effort by Daniel Clarke. The left-back didn’t break stride as he got onto the edge of the ball 25 yards. A thunderous strike from the flame-haired full back scorched past goalkeeper Liam McBride.

Kildrum were incensed 16 minutes from time when Luke Toland went to ground under the challenge of McBride as he attempted to skip around the ‘keeper.

Toland appeared to have been nicked but referee Mick Lagan booked the Kildrum forward for simulation – his second caution of the night and he made the long walk. The Tigers were irate, though the moment perhaps galvanised Shane McGinty’s charges and they advanced thanks to McHugh’s deadly double.

Kilmacrennan are still awaiting the result of an Ulster FA appeal that will determine whether it will be they or Cappry Rovers who will be crowned as champions of the Premier Division.

They, too, were angered when, at 2-1 down, Seamie Friel went to ground on a promising attack. Those protests were also waved away and Friel was sent off for voicing his displeasure after the final whistle.

Kildrum themselves had been given a shot in the arm in the League when that points deduction offered a glimmer, but the concession of a late goal in a 3-3 draw away to Donegal Town put paid to the title hopes of the 2017/18 double winners.

The St Johnston men had the ball in the net in the 17th minute when William Lynch beat McBride to James McNulty’s searching ball into the mix. When the ball bounced again, it was headed to the net by the head of a defender, but a free out was given against Lynch and Kilmacrennan could breathe.

A minute later, Matthew Crossan’s free kick, delivered from way out on the right-hand side, almost caught McBride out as a wicked bounce very nearly deceived the number 1, who managed to claw away.

Damien Crossan, who has returned form injury in recent weeks, tried his luck in the early exchanges, but was well over the target with his attempt, while Kevin O’Donnell had a similar outcome at the other end midway through part one.

Friel got away from Matthew Crossan – who had an excellent night at the heart of the Tigers rearguard – on the edge of the area, but the intervention of Ryan Higgins proved timely.

Right on the shrill of the half-time whistle, Kevin McHugh fired a reminder that Kildrum wouldn’t go quietly, his stinging effort fizzing just over.

McHugh smacked the crossbar with a curling 20-yard free kick six minutes into the second half and McBride beat away a drive from Matthew Crossan as Kildrum sought a way back into the tie.

Clarke gave them a way in before McHugh burst the doors open.