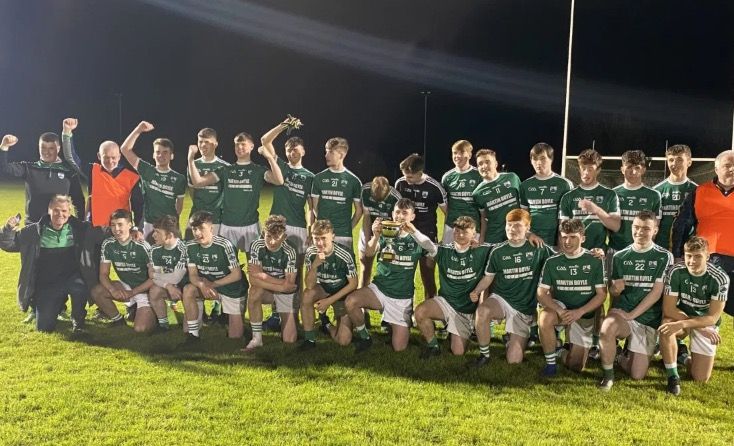 GAOTH DOBHAIR are celebrating the Northern Board Division 1 Minor title following the narrowest of extra-time victories over Termon at St Mary’s in Convoy.

A goal by substitute Aidan Griffin ultimately proved the difference on an evening that roamed into night with the margins minimal throughout.

Brian McDaid scored the Termon goal 12 minutes from the end of normal time, when he skipped around Daithi Roberts to finally tilt the balance of power towards those in maroon and white. But it wasn’t to be.

Gaoth Dobhair’s Domhnall Mac Giolla Bhride drew the sides level in the third minute of injury time. Then, moments later, with his side on the attack and hoping to fashion a dramatic winning score, match referee George Montgomery blew for time much to the annoyance of those from the west with the score 1-8 to 0-11. Extra-time.

There, in the first period, Termon’s Jack Alcorn and Micheál Ó Dochartaigh traded points, and in the second period a goal by substitute Aidan Griffin, when he bundled home from close range after a dropping ball wasn’t dealt with, meant Gaoth Dobhair were three up, 1-12 to 1-9.

Stephen Black’s prowess from dead balls was a huge factor for the side managed by Trevor Alcorn and Black’s seventh of the game was his side’s first from play – in the 73rd minute but Termon would fall just short.

Black scored four in the first half of normal time and then added two more in the second, while Jack Alcorn put over two early frees.

Gaoth Dobhair managed a couple of first half scores from play, although their top-scorer was goalkeeper Daithi Roberts, who scored five frees and saw two more come down off uprights, and Eoin de Búrca kept them in it late on.

The team from the Burn Road had most of the play in the opening quarter, following which they would’ve wondered how they were 0-4 to 0-3 down.

Gaoth Dobhair’s Cian McBride had scored the only point from play in that opening 14 minutes, but in a whisk, three points on the spin turned things around to give Gaoth Dobhair a slender one-point lead at the water break.

Goalkeeper Roberts had confidently dispatched two frees and then Eoin de Búrca split the posts. Stephen Black’s 45 brought the sides level and then edge Termon in front – either side of Jamie Grant saving a shot from de Búrca that would’ve been a certain goal.

Domhnall Mac Giolla Bhride for Gaoth Dobhair and Black’s fourth of the half rounded it off.

A point down at 0-6 to 0-5 the break, the Magheragallon side were 0-8 to 0-7 down by the water-break for two more frees from Roberts, with Black – with two more of his own – inevitably the Termon scorer at the other end.

A fifth Roberts score restored parity at the outset of the fourth quarter. However, McDaid’s goal put three between them, 1-8 to 0-8, and on the night that was in it, it was a sizable advantage. Termon looked likely.

However, Eoin de Búrca scored two points in the 56th and 57th minutes to bring Gaoth Dobhair back to just the one down. Domhnall Mac Giolla Bhride’s free in injury time brought the teams level to ensure extra-time, 1-8 to 0-11 at full-time.

Gaoth Dobhair came through it in extra-time.