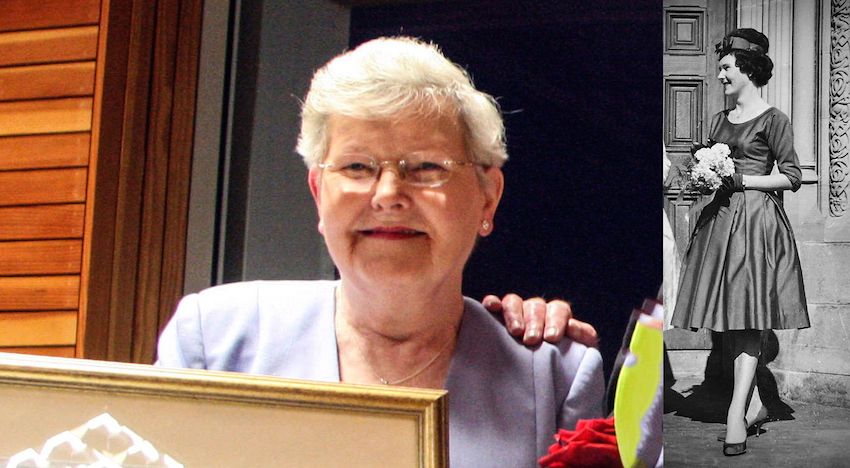 Remembering the life of Peg Allison – a tribute

It wasn’t until this week Monday that the news of the death of the late Peg Allison filtered out around Letterkenny of her passing at her home on Sunday.

On Monday, at indifferent times it was announced that Peg Allison’s remains would leave her home that evening from St. Eunan’s Tce and would repose overnight in St. Eunans Cathedral.

On Monday evening I joined a few to wait at the Cathedral to meet Peg’s remains as she travelled up the Back Road for the very last time.

Family and friends found seats at a safe distance to comply with the COVID restrictions in St Eunan’s that evening.

A hymn, a reading, the gospel, a decade of the rosary and a few words by Fr. Gillespie beautifully summed up Peg”s life.

Fr. Gillespie then told us would her remains be placed overnight beside the font that she was baptised at 92 years before when she entered this world.

Leaving the Cathedral that evening where I thought I had went to say goodbye to Peg I ended up coming away saying hello, hello to her memory, hello to her life, and hello to her vocation of care.

Peg had many friends in her long life, this is the story of just one of her friends and what connects this person with me.

Peg was one of my late mother’s best friends, they ran about as young girls together, they were the same age and in 1961 Peg was my mother’s choice as bridesmaid.

A few years before that my mother Mary Ellen returned from London where she worked as a dressmaker and did alterations for a few of the stores there.

On her return a corner of the store on the Back Road that housed a Ford van and drapery supplies from my grandfather’s clothes run was cleared for a young returning immigrant to set up a wee business.

With her mother’s old foot-operated Singer sewing machine, Mary Ellen set up by the window and my mother did alterations and made clothes to measure.

On the run up to the summer of 1961 that wee store must have been a hive of activity as this young girl and Peg set about making both her wedding dress and her bridesmaid’s dress for Mary Ellen’s forthcoming wedding.

I can only imagine what that would have looked like, the two of them and all the style in this converted shed trying on the dresses, walking over and back across the garage floor which would have doubled up as their private catwalk, smoking cigarettes, chatting away and trying to create the latest fashion making alterations all of which were ready for that big day.

A pictured recalling the style of the two girls from the” foot of the town” at the wedding on my mother Mary Ellen and her bridemaid the late Peg Allison who passed away at the weekend. Photo Liam Kelly.

That old store over the years was renovated into a home and is now where I’m writing this column while feet away the old Singer Sewing machine is still here at the photographic studio on the Back Road.

As the old black and white picture of the two girls at the door of the cathedral shows the two girls looked great on that special day.

Local photographer Liam Kelly also from the foot of the town captured the two of them beautifully in the sunny day in July.

Then in 1965 Peg was on hand again to be godmother to one of my brothers Nelius, called after Fr. Mark who was also called Nelius before he took the name Mark for the priesthood. From the joy of baptism sorrow followed for Peg when her best friend, my mother passed away in 1970.

Every year after that on Nelius’ birthday or at Christmas Nelius also got a present from Peg Allison. All wrapped up, always the same, four pairs of socks. He never got to keep the four pairs, as they were always three more of his brothers with the toes out of theirs. Even after my brother emigrated to America Peg still sent socks up for Neilus for a few years.

Peg worked in Tinney’s Drapery on the Port Road and her sister Frances worked in the old Cope which then became the IAWS which was on the Main Street which was across the road from where Paddy Delap’s newsagents is now.

When Frances became ill Peg gave up her work to look after her sister in their family home in St. Eunan’s Terrace.

Peg at her brother ‘s civic reception at the UDC offices in Letterkenny a few years ago. Photo Brian McDaid.

Peg was a regular on her journeys around Letterkenny mostly on foot, be it heading to do a bit of shopping, Frances and her sister could be seen at mass and would sit up at the door at the back of the altar both of them devoted to their faith.

Both of them did their part in the celebration of the feast of St. Eunan in the promotion of the open air mass in the Terrace every year on the 23rd of September.

A beautifully handwritten letter would always land a few weeks before notification of mass from the Allison household followed by a letter of thanks one week after the feast day celebration. Even in the years that I missed the mass, that letter of thanks was a nice way of reminding me not to miss next year’s mass.

Meeting Peg on the Back Road over the last 50 years as a child growing up over the years since my mother passed away, I always had Peg as my connection with the past.

The old wedding day photo records the day but meeting Peg, who was the same age as my mother, made me think of what my mother would look like had she lived longer and had grown gracefully like her bridesmaid did.

Peg Allison at the door of St. Eunans Cathedral as Bridemaid for my mother. Photo Liam Kelly.

On the 4th of September for no other reason than having a new phone I decided to go down as the sun set and take a few photos of St. Eunans Cathedral.

A few nights before that I heard the bells chiming around 9pm from my home in Glencar and thought it would be nice maybe to record both, call it serendipity or whatever those bells calling just felt beautiful.

I posted the small slide show not thinking for one moment I would be back a few days later in the same place standing in front of cathedral waiting of Peg’s remains to arrive at St Eunans Cathedral on Monday night.

A card on flowers from friends and neighbours from St. Eunans Residents recalling fond memories of the Late Peg Allison. Photo Brian McDaid.

On Tuesday following her funeral Mass Peg was laid to rest with her family in Conwal in the family plot with her sister Nora who died in 1948, her father Henry 1963 her mum Fanny 1973 her brother Cannon Harry 2013 and her sister Frances who Peg missed so much since her death in 2018 and this week Peg, the last member of the Allison family joined her family and all her best friends that passed before her in heaven.

I have included the small slide show in memory of the late Peg Allison of St. Eunan’s Cathedral, a place she spent a big part of her life in prayer

Remembering the life of Peg Allison – a tribute was last modified: September 9th, 2020 by Staff Writer