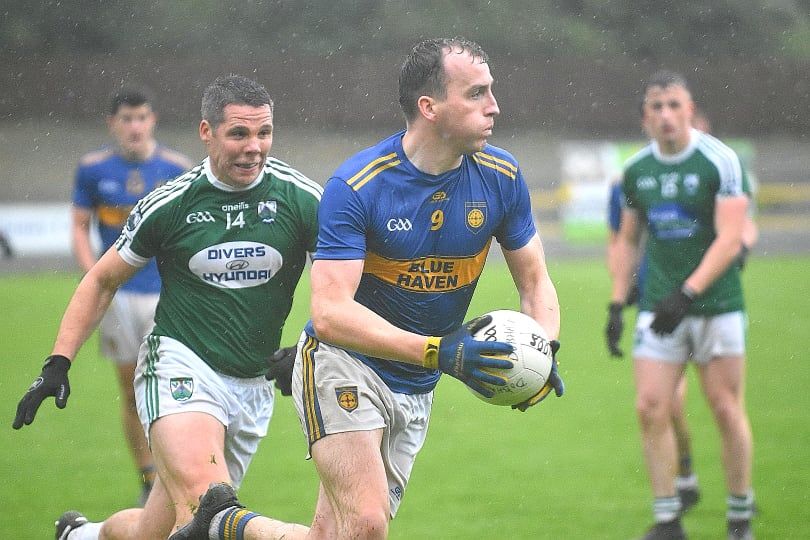 KILCAR battled their way past Gaoth Dobhair and onto the final of the Donegal SFC in atrocious conditions at O’Donnell Park.

The expected shootout never materialized in the soggy jerseys in front of the near-empty Covid-restricted ground but Kilcar won’t mind a tap. They produced a brave performance and were the better side for the most part.

They’ll now await the winners of tomorrow’s semi-final between Naomh Conaill and St Eunan’s and know their performance in Letterkenny added a string to their bow many mightn’t have thought they had in their locker – the ‘grid her out’ one.

It was Kilcar who settled the fastest in the awful conditions and kicked the first three points, with Andrew McClean, Ryan McHugh and Eoin McHugh the scorers.

Gaoth Dobhair had scraped past MacCumhaill’s on a 0-14 to 1-10 scoreline six days early in weather that seemed like it was six months ago and did so with no Michael Carroll, who wasn’t on the panel, and the injured Odhrán MacNiallais.

Both were back and Carroll opened his side’s account on nine minutes and then Seaghan Ferry pulled another one back, so Kilcar were 0-3 to 0-2 up on 10 minutes.

MacNiallais and Eamon McGee were part of a new-look full-forward line for Mervyn O’Donnell, with Kevin Cassidy not starting.

McGee, on 14 minutes, was wondering around the 45 and produced an eye-of-the-needle pass for Eamon Collum to shoot under Kevin Campbell and give Gaoth Dobhair the lead.

John McNulty’s team were content to sit back, showing the Ulster champions of 2018 significant respect, operating with very little possession. When they did open up a bit, like an accordion, they had the firepower to hurt Gaoth Dobhair.

Darragh O’Donnell levelled it at 0-5 to 1-2 before a superb Daire Ó Baoill point for Gaoth Dobhair and a free from Patrick McBrearty, who was well marshaled by Neil McGee.

It was 0-6 to 0-6 at the break as the two panels huddled in either side of the stand for shelter and their respective team talks with the rain battering the roof above them.

Another McBrearty free and a score from Matthew McClean – when Gaoth Dobhair claimed in vain he had plucked from the floor – put Kilcar two in front in a third quarter they began to exert come sort of control.

They were snuffing out Gaoth Dobhair’s attacks without a shot going off and were picking up the loose change at the other end, whilst they were dictating the tempo. McBrearty then put over a peach considering the elements from distance for a 0-9 to 1-3 lead on 42 minutes.

Fifteen minutes of playing time had passed since Gaoth Dobhair’s last score and Daire Ó Baoill, again, was the man on the mark. However, MacNiallais wasn’t moving as he could and had to be replaced by Cassidy as Kilcar led 0-10 to 1-5 at the second half water-break with Ethan Harkin scoring the first of his two frees having also come off the bench.

McBrearty added another free and Ryan McHugh a point to edge their team closer to a first final since they won in 2017. Andrew McClean, the man whose point opened the scoring, closed it and closed the book on Gaoth Dobhair’s season whilst Kilcar have another chapter or two to pen.

Kilcar battle through the wind and rain to see off Gaoth Dobhair and seal Donegal SFC final spot was last modified: September 12th, 2020 by Alan Foley