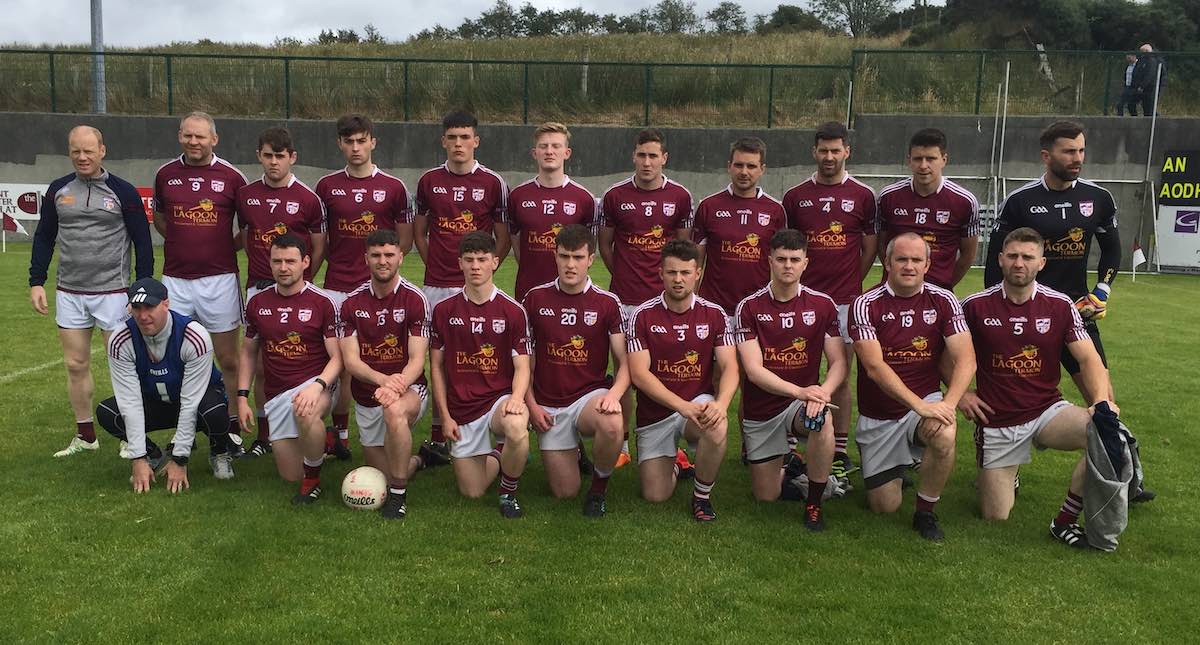 TERMON sealed their survival in the Donegal SFC with a six-point win over Milford in the O’Donnell Park rain this afternoon.

An uncompromising draw that included trips to Towney and Glenties meant Termon lost four from four with a point difference of -66 in round one. Francie Friel’s young team, though, with a healthy sprinkling from last year’s minor success, were the better team against Milford in Letterkenny.

They did their damage early and as a consequence Milford were chasing throughout. Daire McDaid, Enda McCormick and James McSharry, who was sent off late on for a second yellow, did all the point scoring.

Milford did come back to within three points late on – that was as close as they would get. Ryan McFadden’s goal at the bitter end put Milford out of their misery on the day – they’ll now enter Last Chance Saloon with Dungloe looking them in the eye.

Termon started well, spinning off four scores with Daire McDaid scoring a free and one from play, James Mc Sharry and Enda McCormick adding one from a play and a free – all inside of seven minutes.

Milford’s shooting was wayward to begin with, kicking three wides and when they did get in on goal, Matthew McLaughlin opted to go for goal and his shot was straight at Enda Maguire in the Termon goal.

Daire McDaid’s third point of the afternoon made it 0-5 to 0-0 at the first water break and after it, the same player was denied a goal by a top class save from Shaun Gallagher, who turned it around the post at full stretch, after Enda McCormick’s superb diagonal ball.

Twenty-three minutes in, Milford finally got off the mark when Kane Barrett drilled over, although Termon were relieved to have conceded just a point after Maguire’s kick-out was pinched by Darragh Black.

At half-time the score was 0-8 to 0-2 for Termon, with McSharry scoring an excellent point on the break with the last kick of the half.

Both parties will have been deflated to a degree with their shots on goal. After 39 minutes the wide count was 10-9 to Termon, although they at least had the cushion of a five-point lead by then; not afraid to sit in and invite Milford onto them.

Cathal McGettigan was introduced at half-time and his point on 44 minutes brought Milford back to four down and Darragh Black wasn’t far off with a shot on goal that flew just wide. A goal there would’ve put Milford right back into things, but their challenge was gathering pace. Termon were 0-8 to 0-4 at the three-quarter mark.

McGettigan pulled another back from a free afterwards and Termon were glad that McSharry got their first score of the half 19 minutes in and McCormick’s point two minutes later settled nerves at 0-10 to 0-5.

McGettigan’s third free, a long-ranger from Conor McHugh and Christopher Barrett’s points did bring Milford hope, 0-11 to 0-8 down with four minutes plus injury time to play and McSharry was sent off for a second yellow.

Ryan McFadden confirmed Termon’s survival with a goal in injury time after a give-and-go with Barry McGeehin.

The side from Moyle View haven’t win a fixture since this weekend last year, when their victory in Glenfin made them the first team to qualify for quarter-finals.

This term, they rallied to come back from seven down to almost seal safety against Four Masters, only for Sean O’Kennedy to snatch a late draw and consign Shaun Paul Barrett’s team to the Russian Roulette of the relegation play-offs.

The wheel is still spinning on that for Milford.