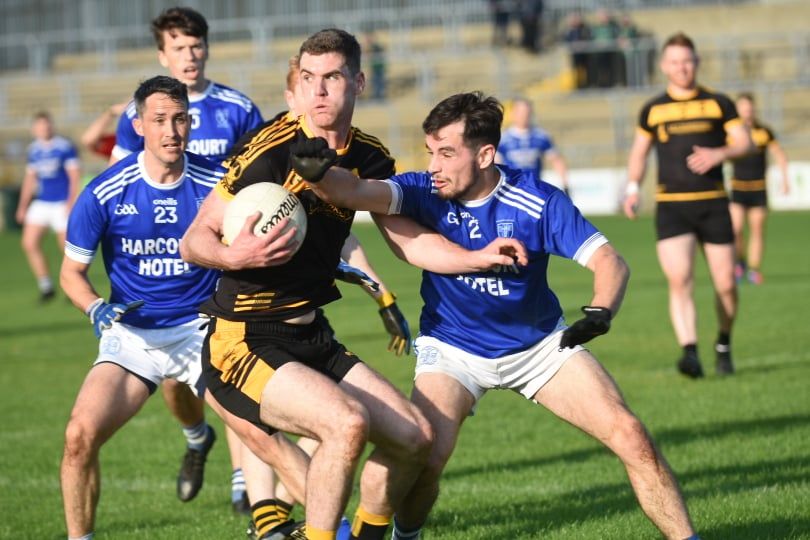 Naomh Conaill have reached a fourth Donegal SFC final in a row with Ciaran Thompson kicking the winning point against St Eunan’s a minute into injury time at the end of extra-time – but the match swung on a controversial goal just beforehand.

Thompson, who hobbled off last week in the victory over Glenfin, departed right before throw-in, vacating the stage for Leo McLoone, but was there when it counted most as his team came from three down in extra-time to win.

St Eunan’s looked to be on their way to a first final since 2015 when Sean McVeigh, substitute Conor O’Donnell and Niall O’Donnell gave them a 0-12 to 0-9 lead at the start of the second period of extra-time.

However, on 74 minutes Naomh Conaill got back on terms when an Eoghan McGettigan effort didn’t have the legs and fell short into the arms of Shaun Patton. McLoone challenged the St Eunan’s goalkeeper, who seemed to have two hands on the ball and he and the ball ended up in the net.

For a minute it seemed as though the goal hadn’t a hope of standing but it did, with St Eunan’s livid, having earlier been denied what they felt was a legitimate point when Rory Kavanagh’s effort was waved wide.

Level then, penalties seemed on, until Thompson’s crisply struck winner finally ended it.

At the end there was a palpable sense of relief from Naomh Conaill, who drew for breath even still half stunned themselves, with St Eunan’s devastated in silence.

It was so close but Naomh Conaill survived despite having AJ Gallagher given a straight red in the first half for alleged striking offence and Jeaic Mac Ceallbhuí in the last minute for a second yellow.

Charlie McGuinness grabbed two scores in the opening four minutes, one from a free and then from play, with Sean McGettigan opening the St Eunan’s account in between.

From then on, there was little room to wriggle, with only one more score in the opening quarter, a fabulous outside of the boot effort by Nathan Byrne on 14 minutes.

Naomh Conaill were funneling all back and St Eunan’s, who had more of the ball, were having bother breaking down the mass ranks of the defence. When the need arose, the Letterkenny team would get back and neither party were overly keen to needlessly kick possession away. If they had to go back, then they’d go back.

However, late in the half Peter McEniff got in to score and Eoin McGeehin caught a fine ball over his head to turn and make it 0-3 to 0-3.

There was a significant moment late in the half when players from both teams got involved in a bit of a fracas. When the dust settled referee Seamus McGonigle consulted with both linesman Enda McFeely and an umpire before giving AJ Gallagher a straight red card right on the stroke of half-time. It was 0-3 to 0-3 at the break.

Last year at the same stage, Naomh Conaill squeezed past Richard Thornton’s side on a 0-15 to 1-11 scoreline.

McGuinness scored the opening point of the second half from a free, with both teams questioning the referee for playing a bit too much of the advantage rule, or even letting it go.

Ultan Doherty and Eoghan McGettigan scored for Naomh Conaill and although Niall O’Donnell posted two third-quarter frees, St Eunan’s were 0-6 to 0-5 in arrears on 45 minutes.

One man who showed last week he wasn’t particularly interested in scripts was young Conor O’Donnell, who came today and took responsibility with his first touch to hit a lovely long-range score for 0-6 before a fine Eunan Doherty point on the run to put Naomh Conaill back one ahead.

Nine minutes from time, Rory Kavanagh thought he had levelled it again only for his effort at a point be waved wide at the Town End. St Eunan’s were guilty of ballooning in balls which Naomh Conaill were comfortable in clearing.

Brendan McDyer made the most of a Naomh Conaill break in the final minute of normal time and when he scored it was a two-point game, 0-8 to 0-6, and looked over.

Conor Parke halved that deficit in the early stages of the seven signaled minutes injury time. In the depths of that injury-time, Niall O’Donnell’s free to force extra-time was wayward but was slapped goalwards by Padraig McGettigan.

Kevin McGettigan made a heroic block underneath his own crossbar and then blocked bravely in the line in a pile-up as midfielder Conor O’Donnell lashed a shot that Naomh Conaill somehow kept out.

However, Jeaic Mac Ceallbhuí was sent off for a second yellow and when Niall O’Donnell planted a free from an acute angle with the last kick of the hour, it was 0-8 to 0-8 and only the start of the drama ahead of extra-time.