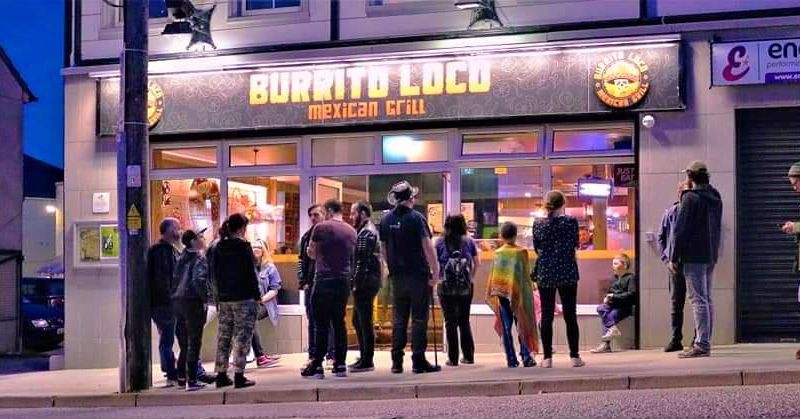 The owners of a popular Co Donegal restaurant have pleaded with other businesses to take Covid seriously after NINE members of staff tested positive for the disease.

Award-winning Mexican restaurant Buritto Loco closed its doors last Thursday as a precaution after a relative of a staff member tested positive.

Amazingly most of the staff at the restaurant on Letterkenny’s Port Road showed mild or no symptoms at all.

But the owners have now confirmed that at present NINE employees have tested positive.

A message on the restaurant’s Facebook page confirmed “I can confirm that today we stand at 9 positive cases. We want to be as transparent as possible and share our journey to show other workplaces or groups how we dealt with this and how it transpired.

“All staff had mild to no symptoms, except for one who is still feeling poorly. All of us have been in contact with the Public Health Authority and are co-operating fully with their track and trace teams.”

The owners revealed that once they had received word of a positive case, they called in all staff at 9am on Friday last and took temperature checks.

“They all proved to be all normal, and ensured all members of staff contacted their GP’s to seek advice. We managed to get 90% of staff tested within 2 hours and the remainder got tested the next day. In our hearts, we believed that we would be back open on Monday, however, this was a process we had to go through to ensure that it was safe for everyone to return to work.”

The restaurant owners said they believe the initial outbreak came from a staff member who complained of being run down but who did not display any Covid symptoms such as a persistent cough, high temperatures, etc.

The oners wrote “Four days later, two other staff had symptoms of a head cold, blocked nose and a few aches but nothing that would point to Covid symptoms. The staff themselves felt it was a head cold and within a day or two felt normal again.

“Three days later, we closed Burrito Loco on the news of a positive case from a parent. It took 8 days in total for the virus to spread through our staff.”

The restaurant said they would like to stress that they are so glad they made the decision to close.

“Most of our staff are of a younger age group and did not show the readily recognisable symptoms that we were looking out for, this is advice I would like to put out there to other workplaces due to some information that conflicts with government advice.

“Particularly this time of year, and with the kids back at school, head colds seem to be the norm and at this instant, we thought that this is what we were dealing with last week in Burrito Loco,” they added.

They added that only for the confirmed positive case, they may not have closed.

“This goes to show that we must take seriously any information we receive from the track and trace teams and the work they are doing to prevent the spread of the virus. I would like to thank a few people also who guided and helped us through this journey, thank you, Dr Scally, the lovely nurses at the test centre, and the patient and considerate staff in the PHA track and trace.

“Also, I would like to thank our customers of Burrito Loco, your kind words of support really helped a lot when you first hear you have entered the Covid zone and in fairness worry sets in fast.

“I also want to give a special thanks to my staff here, they understood from the first minute that they needed to show calmness and maturity when they heard the news and have been so cooperative at every stage.”