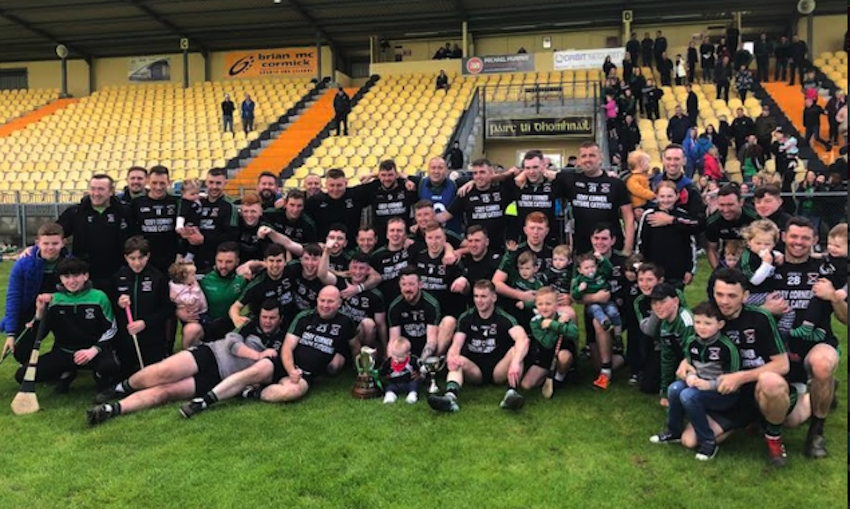 SETANTA are one step away from reclaiming the Donegal SHC following victory over their old foes Burt in the O’Donnell Park sunshine this afternoon.

Davin Flynn’s goal at the start of the second half was a thing of beauty and with the foot firmly pressed on the pedal, Mark Devine and Richard Kee added further goals.

The scoreline might show a 10-point win, but defensively when the match was in the melting pot, Setanta only conceded one point between the 15th and the 46th minute.

There wasn’t much between the sides initially, with Setanta edging ahead by 0-5 to 0-4 with Joe Boyle leading the Burt charge, while the team from Hibernian Park finished the half much the stronger. Boyle was joined on the scoreboard by points by Ronan McDermott and Dara Grant.

They finished the half much stronger to go into the break with an 0-11 to 0-5 lead. Those scores came courtesy of Declan Coulter and Josh McGeever, while Richard McGee and Davin Flynn scored two points apiece.

The only real goal chance came in the first half when Boyle opted not to slot over and his drive at goal was kept out.

In the second half, Coulter opened the scoring before Flynn pierced the opening goal in 34 minutes from an acute angle to put his team 1-13 to 0-5 up.

Setanta overcame their last four opponents Burt on a 3-14 to 1-8 scoreline when they met at the end of July and will be favourites to return to the final, where they were victors over St Eunan’s last year.

The team from the Cross will take on the winners of St Eunan’s against Buncrana, who meet tomorrow at MacCumhaill Park in Ballybofey.

Dara Grant draw a save as it looked the roof was going to fall in on Burt, who had scored just the once in half an hour – between both water-breaks. After the second one it was 1-17 to 0-5.

Mark Devine smashed home a second Setanta goal to stretch the lead out to 18 points, when he tucked home with ease following a pass from Gerard Gilmore with 11 minutes to go.

Burt did get a goal back when Eanna McLaughlin bundled the ball into the net past Micky McCann. With five minutes left Burt were 2-18 to 1-8 ahead. Richard Kee, with four minutes to play, scored a fine individual goal when he made his way across goal and then knocked the ball past McCann.

A late penalty for Burt saw Joe Boyle put a semblance of respectability on the scoreboard. It was Setanta’s day though and it might just be Setanta’s year too.

Setanta turn on the style to see off Burt in Donegal SHC semi-final was last modified: September 19th, 2020 by Alan Foley