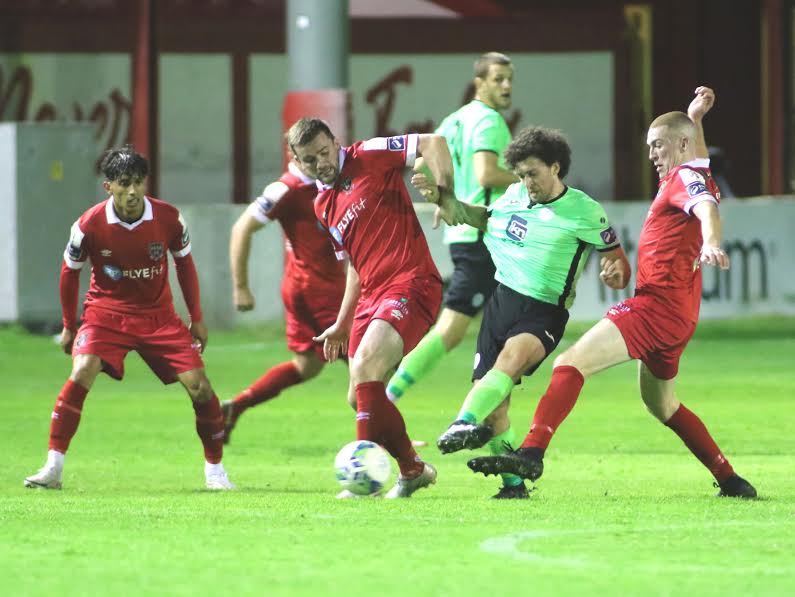 BARRY McNamee’s first Finn Harps goal could be a precious one as it earned the Donegal side a vital away point at Shelbourne tonight.

Harps trailed to Ciarán Kilduff’s 33rd minute opener when they hit back nine minutes into the second half. After Colin McCabe, the Shelbourne goalkeeper, could only parry Mark Russell’s drive, McNamee followed in to convert.

The Ramelton man was Ollie Horgan’s blue chip signing from Derry City ahead of the 2020 season and this may yet prove a priceless strike as it tees Harps up for a crack at Cork, who have no game this weekend.

Shelbourne were reduced to ten men on 76 minutes when Luke Byrne was given a straight red card for taking down Alexander Kogler, as he surged through in the D. 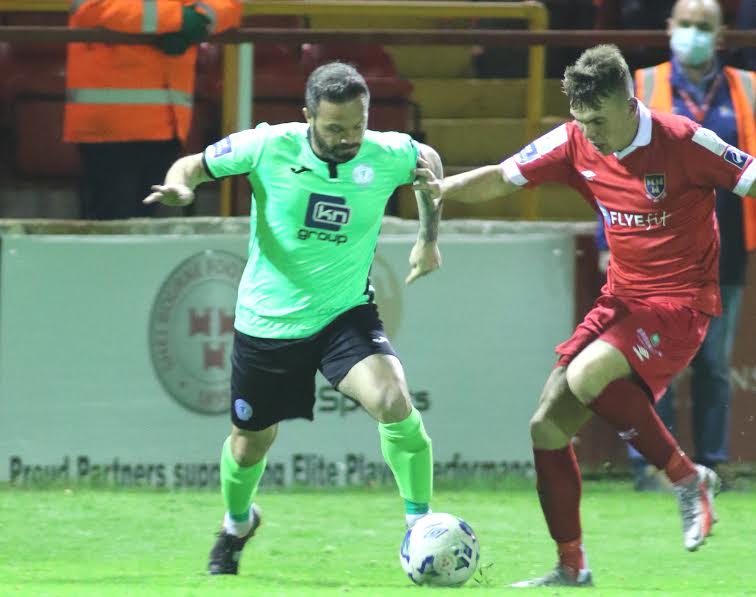 Ian Morris, the Shelbourne manager, was incensed at the dismissal but his side survived as Stephen Folan’s free kick deflected away for a corner.

While grounds around the country have been permitted to re-admit 100 or 200 spectators, depending on the venue’s capacity, in recent days, Dublin’s entry into Level 3 at midnight meant this was played in what has become an all-too familiar behind closed doors setting.

Shelbourne should have opened the scoring after only five minutes. Ryan Brenan’s cross picking out Dayle Rooney in space. Inside the box and with time, Rooney didn’t get the desired connection, but Mark Anthony McGinley McGinley had to save his attempt, which deflected off Shane McEleney. The covering Kosovar Sadiki ensured that Shels didn’t apply the finish.

Leo Donnellan had to clear under pressure when Rooney’s cross, after Denzil Fernandes was given the freedom to drive from deep, as Shels probed with real intent.

McGinley denied Fernandes, who worked a neat give-and-go with Kilduff in a slick Shels move. 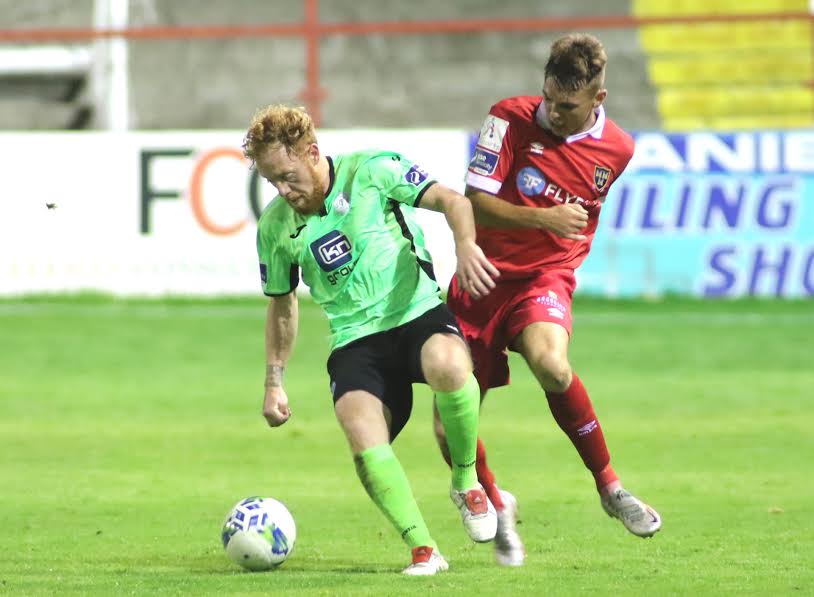 The best Harps could muster up in the opening half-an-hour was when Austrian striker Kogler fired wide from 20 yards.

McGinley was called into action again when he had to palm away a cross-cum-shot from George Poynton. With Kilduff lurking, McGinley might’ve been expecting the ex-Dundalk striker to get a glancing touch, but the absence of a header meant the Ards man had to scramble the save to prevent the ball creeping inside his right-hand post.

From the corner, arrowed across by Gary Deegan, Kilduff nodded home.

Shels defeated Harps 1-0 at the beginning of August in Ballybofey, Brennan bagging the only goal of the game on an evening when the Reds played 80 minutes with ten men after Karl Sheppard’s sending off. 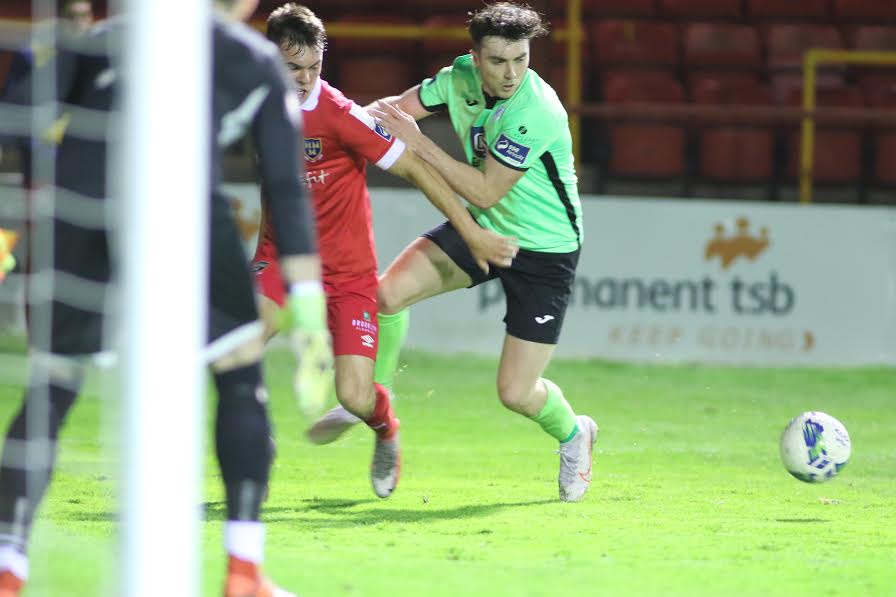 Ian Morris went with an unchanged Shels from the side that was narrowly beaten 3-2 by Dundalk at Tolka Park.

Since the resumption following the Covid-19 lockdown, Harps had taken just four points from their seven league outings, but last weekend’s 0-0 draw with Derry City hoisted them off the bottom of the table.

Horgan made two changes to his selection with Sadiki and Donnellan coming in for Sam Todd, who dropped to the bench, and Ruairi Harkin, who was not in the squad.

Harps came close to drawing level just three minutes into the second half, but McCabe got enough of a touch to tip a fine 30-yard free kick by Folan onto the crossbar. 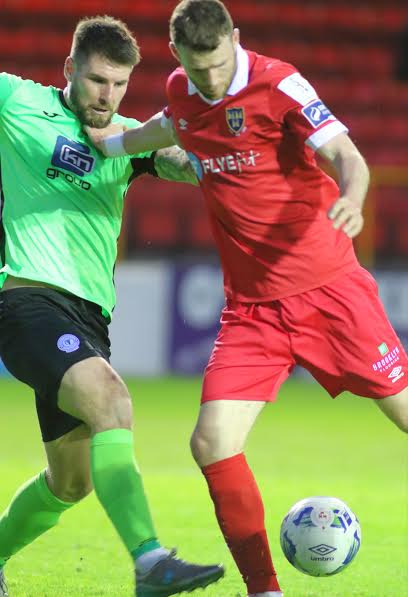 Horgan introduced veteran attacker Raffaele Cretaro at half-time, with Ryan Connolly making way and, after McGinley saved at one end from Brennan, McNamee tucked home at the other and it was game on.

Eight minutes from the end, Cretaro’s stinging effort from 25 yards was beaten away by McCabe as Harps went in search of a third League win of 2020.

Harps had lacked a creative edge in the first half, but they were much better in part two. Russell headed wide late in the night and they may feel as if the dividend could’ve been greater.