THE occupants of a car which failed to stop for the PSNI were arrested after fleeing across fields from Gardaí overnight.

The car crossed into Donegal at Pettigo and was subsequently observed by the Donegal Town drugs unit of An Garda Síochána.

The car again failed to stop for the Gardaí and entered private property, causing what the authorise describe as ‘substantial damage’.

The car, which was found to have been bearing false plates, continued into fields where the two occupants fled on foot before being arrested.

The driver of the car tested positive for cannabis and it was discovered was disqualified from driving.

The drive is to appear before court this morning charged with a number of offences. 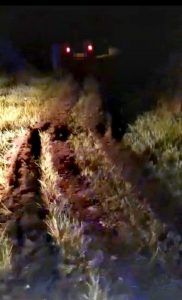