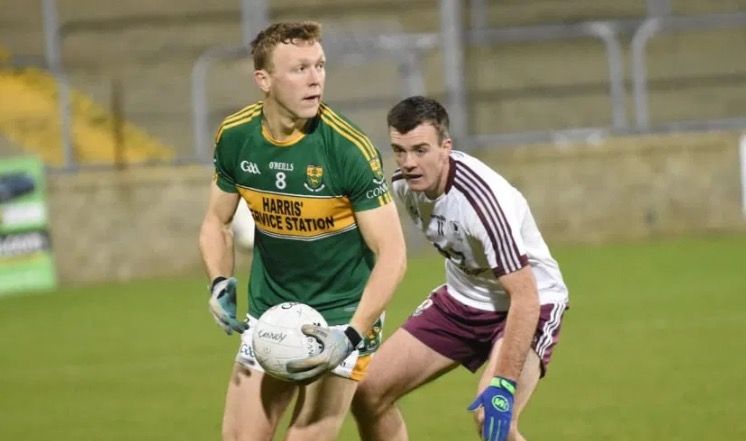 JOSEPH MCGILL kicked nine points as St Mary’s booked their place in the Donegal JFC final with a comfortable win over Letterkenny Gaels.

Five first half points from McGill established a cushion for Laurence McMullan’s team, who can now look forward to a final against Downings next week. He would add four more in part two.

They did it without Raymond McNamee in the latter stages, having been dismissed on 48 minutes for picking up a second yellow card.

Liam Doherty opened the scoring for Gaels on three minutes with a fine score and Paddy Dolan squared it up with a free before John Toye put St Mary’s ahead at 0-2 to 0-1.

Two quickfire scores from McGill meant St Mary’s were 0-4 to 0-1 by the end of first quarter. Then, when the action resumed, Peter Blake’s ball into the square bounced over the crossbar.

Paddy Doherty slapped over a point from good approach play by Conor McBrearty on the end-line.

McBrearty’s free and a point from Shay Doherty kept Gaels in touch, but McGill’s fine shooting kept St Mary’s four ahead, 0-8 to 0-4 up at half-time.

McGill – who else? – opened the second half scoring with a fantastic individual point and then a peach from long range to open up a 0-10 to 0-4 lead.

Paddy Doherty, at the other end, found the ball in front of goal on 42 minutes but shot across the goalkeeper Liam Mailey and wide before a 45-metre plus free from McGill. Another half-chance came McBrearty’s way – his shot was straight at Mailey.

Cormac Cannon put over an eye-catching score from distance, although his side need more quantity of scores – it was their only score of the third quarter. Not to be undone, McGill then scored a similarly fine point from distance to make it 0-2 to 0-5 at the three-quarter mark.

From there on, St Mary’s, at 14 men with McNamee having been dismissed, were comfortable and a drive by McBrearty for goal missed the target and late on, Sean McDonagh drove wide of the post.

In injury time, Paddy Doherty’s shot at goal grazed the crossbar on the way over before Matthew Coyle rounded it off with the last kick.