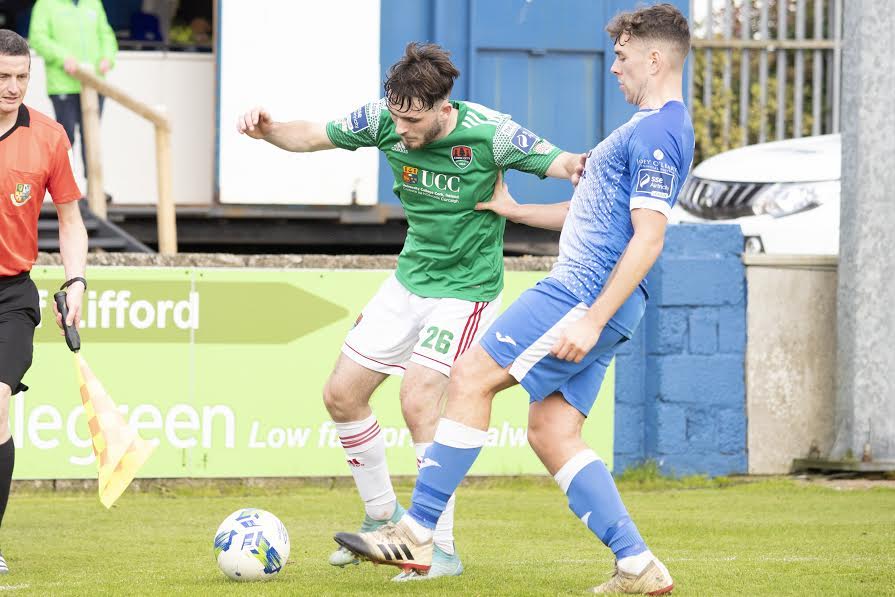 Cretaro rescues a point for Finn Harps in basement battle

VETERAN Raffaele Cretaro rescued a vital point for Finn Harps in their relegation battle with Cork City this evening.

Cretaro came off the bench at half-time and struck a delightful leveller on 75 minutes to keep Harps one point ahead of Cork in the basement battle.

Dylan McGlade fired Cork in front 12 minutes into the second half, but Cretaro drew Harps level 15 minutes from the end.

The former Sligo Rovers attacker was persuaded at the start of the season to reverse a decision to retire from League of Ireland football at the end of last season.

Cretaro, who will turn 39 next month, beat a static Mark McNulty from 20 yards after being teed up by Stephen Folan.

Ollie Horgan, the Harps manager, who was serving a touchline suspension cut a lonely figure as he monitored proceedings from the closed tuck shop on the gantry side of the ground.

Harps had hoped to welcome 200 supporters in for this one, but the introduction of Level 3 Covid-19 restrictions to Donegal from midnight on Friday meant the game was played against a now all-too eerie backdrop.

Action from the bottom of the table clash at Finn Park between Finn Harps and Cork City. (North West Newspix)

A 1-1 draw at Shelbourne last Saturday – earned thanks to Barry McNamee’s first goal for the club – lifted Harps a point above Cork.

Harps were down the suspended Dave Webster while Ryan Connolly dropped to the bench. Sam Todd and Mark Coyle were restored to the starting XI.

McNamee created the opening that ought to have led to a Harps goal on 26 minutes. McNamee’s superb pass put Mark Russell in behind and the Scot’s centre seemed perfect for Alexander Kogler to convert, but the towering striker fluffed his lines, rolling wide from eight yards.

Earlier, Cork goalkeeper Mark McNulty got down to take the sting from a low drive by Karl O’Sullivan while, at the other end, Mark Anthony McGinley wasn’t troubled by a tame attempt from Cian Coleman.

Cork chose to make the long journey from Leeside this morning, opting against a usual overnight stay.

A superb one-handed save by McGinley in the 33rd minute kept the deadlock intact. Coleman rose to meet Deshane Dalling’s cross and his downward header momentarily looked destined for the bottom corner, but McGinley proved equal.

Mark Coyle (Harps) gets his head to the ball as Dylan McGlade (Cork) closes in. (north West Newspix)

Soon after, McGinley brilliantly turned away Dylan McGlade’s testing curler from outside the box.

Cork were on top in the latter part of the first half, but Dalling couldn’t hit the net after getting on the end of Dale Holand’s cross.

After the re-start, McGinley brilliantly kept out powerful half-volley from Joseph Oluwa but the Ards man was finally beaten on 57 minutes.

Daire O’Connor created the chance, getting away from Russell and Sam Todd rolling into the path of McGlade, whose shot from the edge of the area found the bottom corner, leaving McGinley finally beaten.

Cork’s last outing was a 3-0 loss to Shamrock Rovers and there were five changes from that game with Dale Holland, Alan Bennett Oluwa, O’Connor and Kit Elliott all included from the off in Neale Fenn’s selection.

The game was preceded by a minute’s silence in memory of Cork City stalwart John Kennedy, whose funeral took place last week.

In the build-up, Fenn mentioned that this was a ‘must not lose’ game. There were nervy moments for Cork as Folan clipped wide from a free kick and Adam Foley arched over the top with the clock ticking.