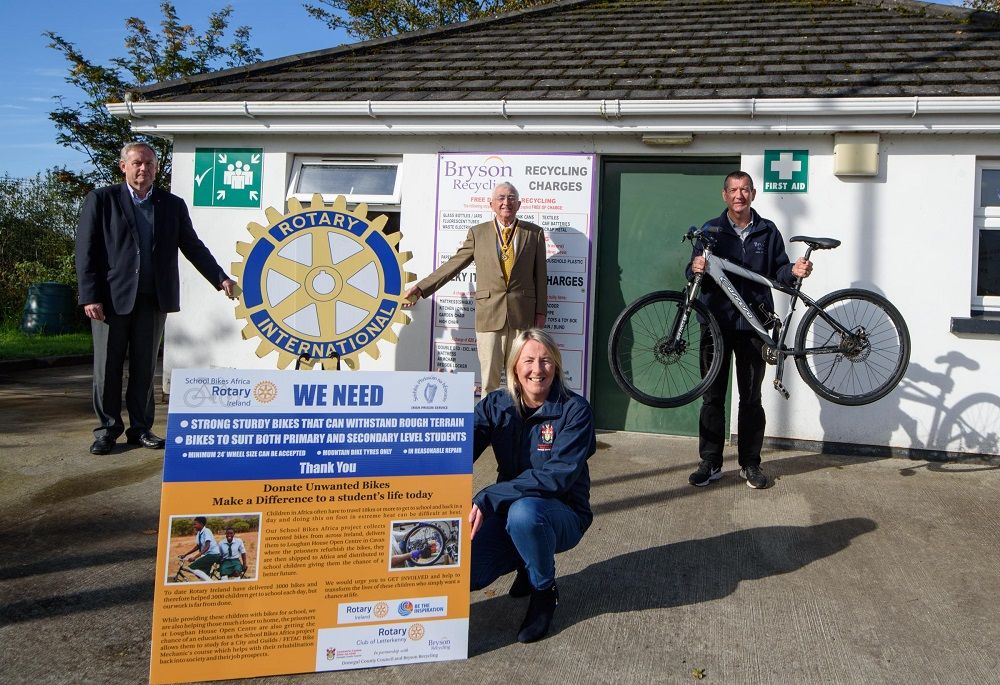 Do you have a bike to re-CYCLE for African schoolchildren?

Strong study bikes are being sought for a wheely great cause!

Letterkenny Rotary Club are delighted to announce the opening of their annual School Bikes Africa Appeal in conjunction with Donegal County Council and Bryson Recycling.

The annual appeal is held during October to coincide with the National Re-Use month and this year has a target to collect 50 strong sturdy bikes over the month of October.

Rotary Ireland has expanded its commitment to collecting, refurbishing and delivering unwanted bikes to school children in Africa giving them the chance of a better life and open up many more opportunities.

As many have to travel long distances to and from school, often in searing temperatures and doing this on foot can be difficult at best, so having a bike can make a huge change for the pupil and family alike as it can be utilised in other ways to help out their communities.

To date Rotary have delivered over 3000 bikes and based on feedback from the Gambia and other African regions, it has now been decided to restrict the Collection this year to;

Racer type bikes with narrow wheels are not sought this time.

While providing these children with bikes for school, Rotary are also helping those much closer to home, namely the inmates at Loughlan House Open Centre, Co Cavan who are also getting the chance of furthering their own education.   Their participation in this project allows them to study for a City & Guilds FETAC Bike Mechanics course which ultimately will help with their own rehabilitation into society and perhaps aid their job prospects in the long term, as well as the satisfaction of working on such a worthwhile charitable project.

Many thanks once again to Bryson Recycling and Donegal County Council for facilitating the Collection. Suitable bikes can again be dropped off at any of the Council’s six Recycling Centres in Dungloe, Carndonagh, Letterkenny, Milford, Stranorlar and Laghey during opening times.

“The local drop-off points make the collection so much easier for the Appeal and while only certain sizes and calibre of bikes are appropriate this year for the Gambian appeal, we look forward to the support by the Donegal people as in prior years”, says Hazel Russell from Letterkenny Rotary Club.

As Donegal is one of eleven counties involved in the national appeal this year, the transfer of the bikes to Loughlan House will be organised for November.

Suzanne Bogan Waste Awareness Officer with Donegal County Council said  “this is a great initiative to be involved in and it fits perfectly with the aims and ethos of Reuse month.  We were delighted with the opportunity to continue our involvement with Rotary and this campaign, as it was such a positive one. It is important that people take note of the type of bikes requested this year”.

For information on the opening times for your local Recycling Centre visit www.brysonrecycling.org/households/recycling-centres/

Do you have a bike to re-CYCLE for African schoolchildren? was last modified: September 29th, 2020 by Rachel McLaughlin