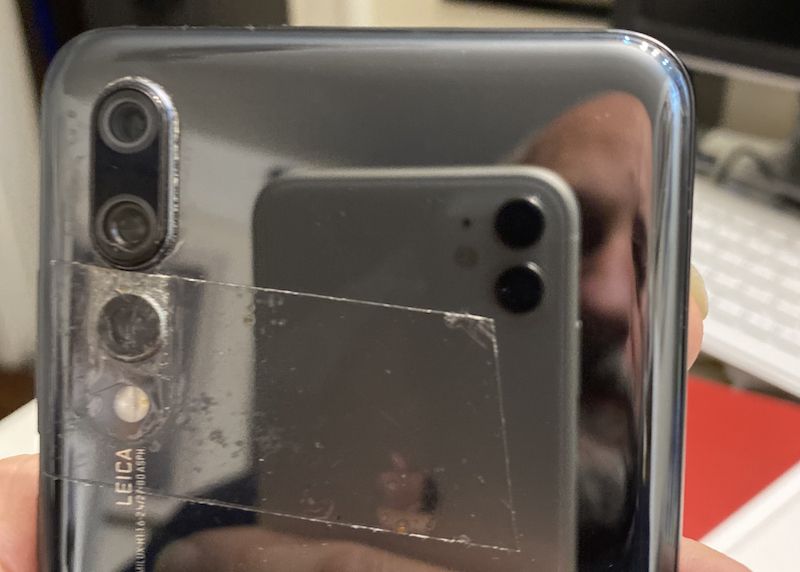 It’s that time for me again when phone contract ends and I get that itching for a new phone.

So on Saturday morning recently I headed to the phone shop to see what was available.

To to make a long story short I found myself heading back to the iPhone range after spending two years working with my first Android Phone.

It was a Huawei or a ‘how-ya’ as someone called it and in a nutshell it had everything that an iPhone hadn’t. Two years ago it had a long battery life, bigger storage and a great set of camera phone lenses developed by one of the best camera makers in the world, Lecia.

I suppose the biggest reason I changed from an iPhone to a Huawei was a bit of local pride of all things.

Fellow Glencar man Joseph Kelly from Wolfe Tone Place in Letterkenny who went for the Post & Telegraphs in Letterkenny went on to one of the top posts on this latest in phone technology Huawei.

Joe Kelly from Glencar pictured in his days in the post office in Letterkenny , now one of the top men with Huawei

Joseph worked in the post office in Letterkenny before heading off on a journey in the ever changing technology world and ending up as the vice president of Huawei.

After two years with an Android phone which I thought was great and did everything it said it would do, I wanted a change.

It’s me that’s not up on technology and working with Apple computers since we left the days of film and changes over to digital for photography I find that over the two years I have decided to head back in search of the Apple phone which operating system I find a bit easier to get around.

Gone are the days of the old Nokia 6210, which in my view was one of the best phones ever made. Bob Geldof, who once described it as the AK-47 of mobile phones, was still using it over a decade after it was released in 2000.

I had one myself and couldn’t even see the numbers on the keypad at the end but it just went on and on. So Apple had big shoes to fill when the iPhone made its way onto the stage, and being a creature of habit and not like change the iPhone pulled me into the digital age of smartphones.

By way of preparing for my change over and doing a bit of research, I realised that the new phone I was getting would have a smaller storage space than the one it was replacing so I thought I would take a small external hard drive with me to the store to avoid that moment of panic when sales assistant asks you if there’s anything you would like to keep before the swap over. As things turned out in these Covid-19 times, handling of my old phone was very limited by the sales team and before I knew it my new phone was in a bag and I was on my way.

Still have the old battered up Nokia 6210 which looks so small along side the Huawei Pro 30. Photo Brian McDaid.

Now I had two phones and one sim and all of my limited IT knowledge to make the change over and I thought to myself what could possibly go wrong? Opening the box on a new phone is just one of those joys in life and Apple seems to have it made this into to a fine art.

Everything from how well the box is made that the phone is packed into the way that the phone charger is neatly wrapped up even down to the way the earphones were presented, which at a glance looked like Airpods until I saw the leads at the back of them.

Preparing for the changeover I plug in the new phone to give it a good charge as I started to prepare to download all the photos on the old phone, and that’s where things started to go downhill for me.

Firstly my laptop flashed up a message that it didn’t have enough space to download all the pictures on the old phone and at the same time the new iPhone came to life giving me at least ten different translations of the word Hello such as CIAO, HOLA, BONJOUR, OLÁ, HALLO.

I was also having trouble transferring my phone contacts out of the phone as well and ended up with a new copy of the old contacts on the old phone itself. And then as if by magic the picture starts to transfer across to the external hard drive. This happens very slowly and a thumbnail of each is popping up like a trip down memory lane. Happy that something is happening, I’m happy to sit and watch this working as I gather my thoughts on what I need to do next.

The pictures from these last two years are from very different journeys from happy images such as the seasons changes to immense sadness, right through to trying to build positivity in the lockdown in the early part of the year when the lockdown was at its highest.

They included of pictures that you didn’t want to let go of, to small video clips that had everything wrong with them until the person in them was no longer here, then that clip took on a different meaning. The sound of someone’s voice all became part of a journey. Then I have offbeat video clips like one of me dialling up on an old phone that I have, the sound of it dialling out the numbers the old way, right through to a video of the Irish Army marching down the Main Street in Letterkenny to head off on peace-keeping duties.

Meanwhile, the new phone had lit up a few times and I’m not ready yet to remove the sim from the old phone and transfer it to the new one. I also remembered at this stage that I had forgotten my Apple ID which is not good news, I know this new phone is going to ask me for it at some stage and I well could be locked out before I ever even get in. Now the old phone has all the pictures and videos transferred.

Using the small tool provided with the phone I start to attempt to remove the sim from the old phone but the door will not open on it. Trying a bit more pressure I try again still no good. So to do what everyone does in these situations I go online on the computer nearby and type in “how to remove the sim on a Huawei phone”.

I really only want to know how to get the door opened and I soon realise that I wasn’t using enough pressure so back with the information to ‘take three’ and the door pops open and the sim carrier falls the table and what looks like the smaller sim I have ever seen bounces on the table before falling to the floor.

I freeze and slowly look down to see where it has gone but it has disappeared! I carefully reach for the old phone and go to switch on the torch on it but now the phone has locked closed possibly because the sim door is lying on the table beside it.

I look around the floor again, still no sign of this nano sim. I’m afraid to even stand up in case I stand on the sim that I cannot see. So I take one big step away from the area that I think it should be and return on my knees.

I’m fearing the worst as this is old wooden floorboards and this sim might have gone down into the tunnelling grove or worst still went through them. My search is not now from Google but to St. Anthony looking along every floorboard and as if by magic its the reflection of the printed circuit on sim card that shows it sitting on its edge in the grove of the timber. Carefully I praise it out and thank God and St. Anthony for its recovery.

So now it’s back up on the table and I go to place it into the carrier of the new phone but it won’t fit so I turn it upside down and that even worse. The thought crossed my mind that it might have damaged but on closer examination I find that it’s the small break off points on the plastic that are preventing it from fitting into a tighter made carrier on the new phone complained to the old phone it came out of.

So now I have to cut a bit more of this already thin sim card before I can get it to fit in. Then a double check online to see which way is the right way up, the sim fits into the carrier and it slides into the new phone and powers up again.

The carrier of the SIM card and minus the sim. Photo Brian McDaid.

My new phone is all up and running now and it’s the best of friends with my apple computer. It’s even talking to Siri who doesn’t understand a word I am saying. My phone contacts are still in a new folder on my old phone which now is unlocked again so every so often I have to switch on my old phone to find the number of someone to dial it on my new phone.