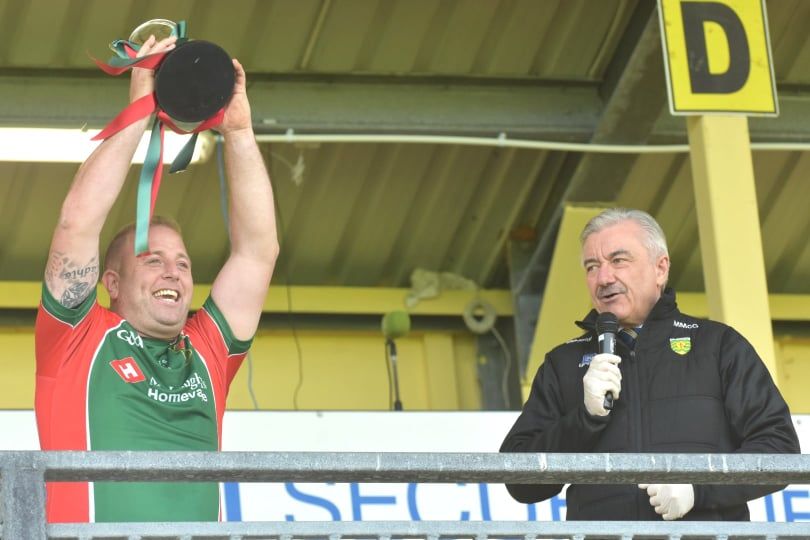 A Dermot McGonigle goal 10 minutes from time swung the balance of power towards Carndonagh in this afternoon Donegal SJC final against Dungloe this afternoon.

McGoingle swept a loose ball home to give Ronan Mulligan’s team a 2-11 to 1-9 lead against plucky Dungloe, who were appearing in the final in their first ever season in the adult ranks.

Man of the match Cathal Doherty also played a vital role, with eight frees for the team managed by “Carndonagh’s own Brian Cody, Ray Walsh,” as captain John O’Donnell put it in his post-match speech.

Dungloe refused to lie down in the latter stages, with Sean McGee goaling six minutes from time to make a game of it. When Richie Ryan put over his seventh the eighth placed ball of the day, there was only one in it – Carndonagh 2-12 Dungloe 2-11.

Doherty’s free in injury time put two in it, with Dungloe doing their utmost to scramble a winner. However, their efforts fell short.

From their first meaningful attack, O’Donnell was on hand to ram home a goal following a good run from Cathal Doherty, who then added a couple of frees to give Carndonagh a 1-2 to 0-0 lead.

John Boyle had Dungloe’s first real opportunity on 12 minutes, when the ball broke his way he hit the base of the post. At the other end, Eoin Kelly got into space and his pop at goal was just wide.

Dungloe got off the mark in the 15th minute through Richie Ryan. Carndonagh were 1-4 to 0-1 in front at the water-break.

Matthew O’Donnell and Ryan added further Dungloe points before Dara McCormick, another Doherty free and O’Donnell added points for the Inishowen team, to put them 1-7 to 0-3.

Ryan then went for goal from a close-range free, only to hit the crossbar, and the follow-up from Sean McGee was brilliantly blocked on the line by Mark Diver to keep the Carn sheet clean.

With a steady supply of placed balls from Ryan, Dungloe were playing their way back into the match. They trailed 1-7 to 0-6 at the break.

Sean McGee’s point opened the second half to continue to forward trajectory of the Rosses-based side.

Another goal proved elusive for both teams. Firstly, Dermot McGonigle got through for Carndonagh and rapsed the woodwork, seconds before O’Donnell had a chance for Dungloe at the other end that was saved by Stephen Burns.

Another Ryan free preceded a goal from O’Donnell, who netted on 39 minutes when goalkeeper Burns failed to gather and the Dungloe midfielder rammed home from close in. That levelled it up at 1-8 to 1-8.

Conal Doogan, who was just on, edged Carndonagh in front again before James Hartnett tied it up again.

Doherty and Doogan points had Carndonagh 1-11 to 1-9 in front at the three-quarter mark.