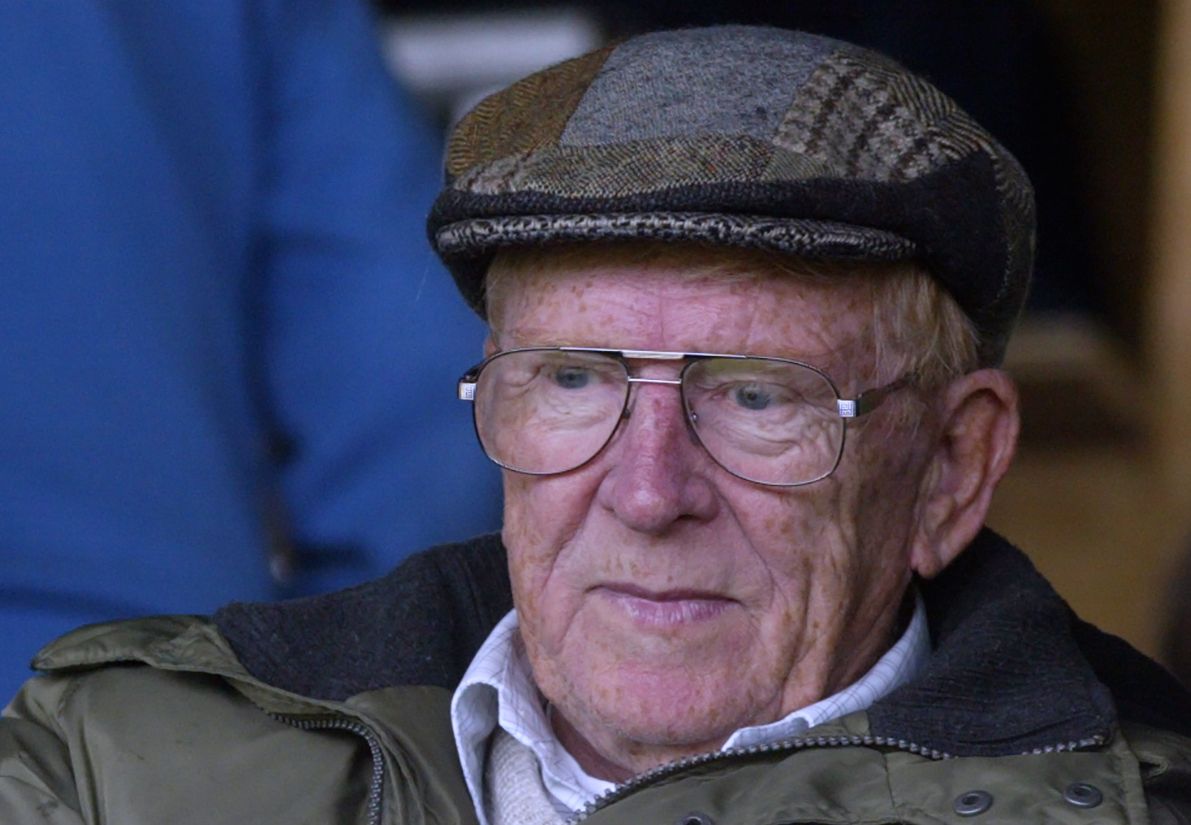 I found myself in a vacant gaze as I passed a wake-house on the road near my old childhood home as the sad news of a good friend and neighbour Danny Breslin passed away last week.

And being unable to call to their house to say a final goodbye and pay our respects because of the national restrictions wakes or the lack of them has left a massive gap in the grieving process for me at times like this.

We had one street light in the middle of all the houses in Wolfe Tone Place. The pole was in Murray’s garden. There was another light at the top of our street and it was the coolest place to hang out in the evenings when light was falling. All the older ones gathered there and most of us wanes weren’t allowed to cross the main road so we watched on from the green across the road dreaming of what it would be like to be older and sit across the road on that couple of feet of wall and have a chat.

That street light was at the gateway of Breslin’s home. They were a family new to Glencar in the 70s, Tobins having lived there before them. The Breslin’s came from Derry, Danny moved his family to Donegal. He was one of the first to work even before the new factory was built in Letterkenny called Courtaulds. It was believed to have cost as much as 65 million dollars to build in the 1970s according to a report in the New York Times. Danny Breslin was the company accountant. 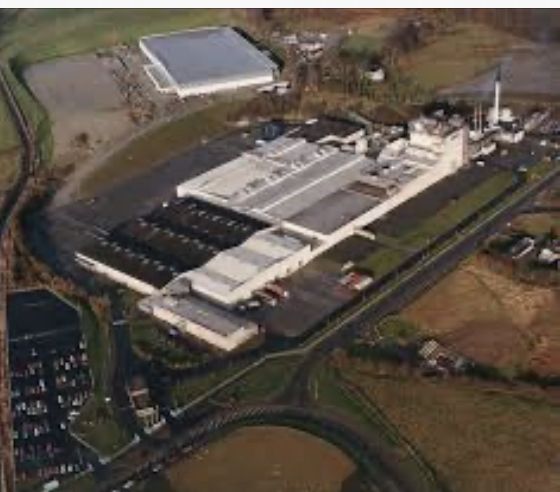 The Breslin children were soon a part of what was a small Glencar at that time.
My brother Nelius, who now lives in America, recalled happy memories over the phone this week of Danny and his wife Mary who had a birthday party for Nelius up in their home when he was best friends with Donal the oldest son.

That birthday is one of the few things he remembers from his childhood and recalled it as the first time he was ever in one of the private houses across the main road from where we lived.

Not so long ago I had occasion to call to the Breslin home with a few things that Danny was getting reframed with me. These included a few old soccer international caps which Danny received when he represented his native Northern Ireland at youth level lining out against such soccer stars of the day like England’s young up and coming Terry Venables. 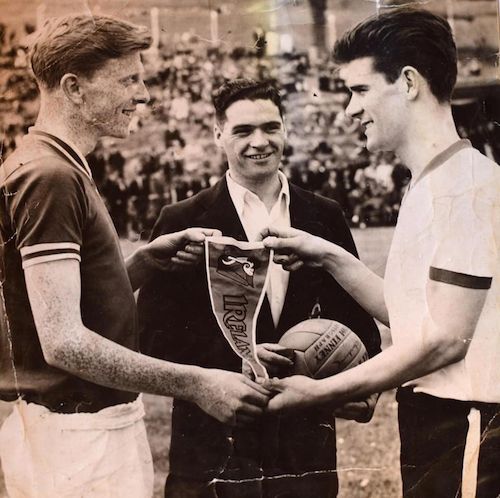 The late danny Breslin in his youth represetning Northern Ireland in Soccer. (Photo courtsey for his son Donal)

Sitting in with Danny and Mary looking down at my old home in Wolfe Tone, it wasn’t long until we were talking about old times, chatting about my uncle Pat who lived three doors away from me. Danny would walk down to have a chat with Pat if he saw him out in the garden. Mary asked about all my brothers and how were they doing and where were they now.

Back in the 1990s when the wane in our family, Peadar, was starting out in life as an artist he was commissioned by Danny Breslin to paint two sets of pictures for two special collections, one of Cholmcille and one of the four evangelists Mathew, Mark, Luke and John. These paintings were used in a special collection set of plates which Donegal Parian China in Ballyshannon produced. Danny was one of the people that set up this company in the 80s. 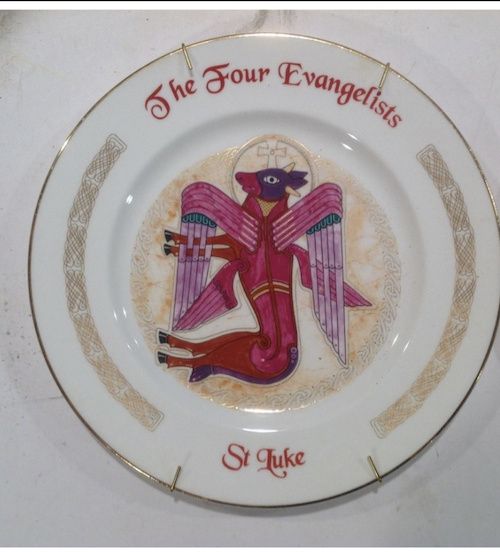 A view of the artwork by Peadar Mc Daid on the Donegal Parian China Plates.

As a photographer in those days, I covered many events and knew a presentation wasn’t a presentation unless the recipient was presented with a piece of Donegal Parian China.

That day sitting in Breslins we talked about many things but my Donegal Parian China story was still a bit too fragile for me to chat about, but looking back this week I think Danny would have like to have heard it.

We were chuffed one Christmas to receive a freshly fired set of finished Donegal Parian China plates from Peadar with his painting proudly in place, something we were very proud of so much so that we had a high deep shelf made along the ceiling to display Peadar’s works which sat there for years.

Then one year while getting our old cooker serviced before Christmas our serviceman decided that he needed to clear a clogged up oil line that ran from the cooker to the tank. I had a compressor that I thought might do the job. He connected the compressor to the oil line in an effort to clear the line and as the pressure built nothing was happening. Then the compressor let and unmerciful bang out of it as it blew a blank cap off the back of the tank. The escaping compressed air found its way into the corner of the kitchen with such power that it slammed the kitchen door closed. Now it felt like a tornado in the kitchen, then as if in slow motion I seen one of Peadar’s plates taking flight and to my amazement I managed to catch it on the way down and then the wind lifted the next one high of the shelf it was like a scene out of a Harry Potter film. 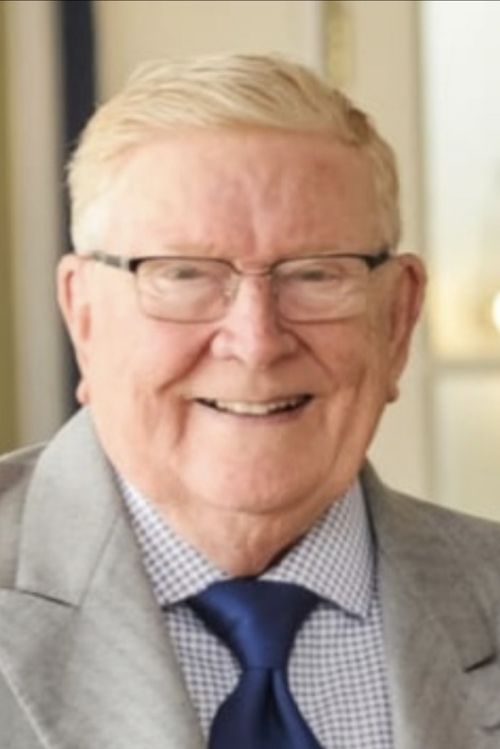 The late Danny Breslin who sadly passed away last week

As the second one took flight, St. Mathew I think it was, I threw St Luke, my hand on to where I thought our couch was but missed and it landed on the floor and smashed making me also miss catching the second and the third one, which now all lay in smithereens on the floor. Then St. John took flight who was out of my reach but managed to land safely on the couch all on his own only to be followed by the Statue of Jesus who landed directly on top of the last remaining evangelist also smashing him to smithereens.

That day as the compressor expelled the last amount of compressed air there was a moment when I realised just how proud I was of my brother and how the broken china pieces on the floor that now never could be replaced were gone. Up on that shelf a boomerang and a rugby ball that came from our cousins in Australia both designed to fly through the air never even moved.

Recalling that smashing time this week I also thought of an appreciation through loss of people like Danny Breslin who gave people like my brother Peadar a chance to encourage them in times when it was more the norm for someone to tell you what you were doing wrong. 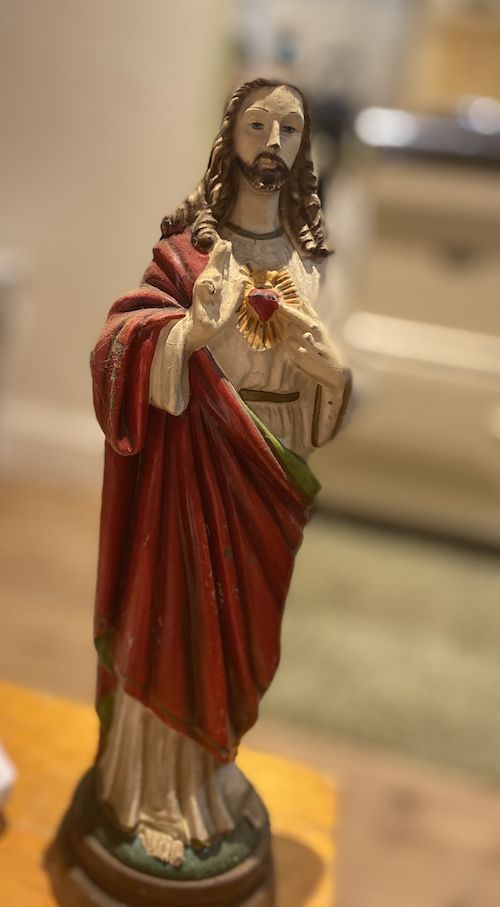 The statue of Jesus who survived the fall that day the Donegal Parian China plates came crashing down. Photo Brian McDiad.

Danny’s belief in Peadar in asking him to paint pictures started Peadar on a journey that included him returning to college to get his art degree which he shares in his job as a tutor in Create a Link.

The light at the end of our street always seemed to be out of our reach growing up. One street light between three rows of houses is not much light spread out to cover everyone and sometimes you end up buying into negativity. 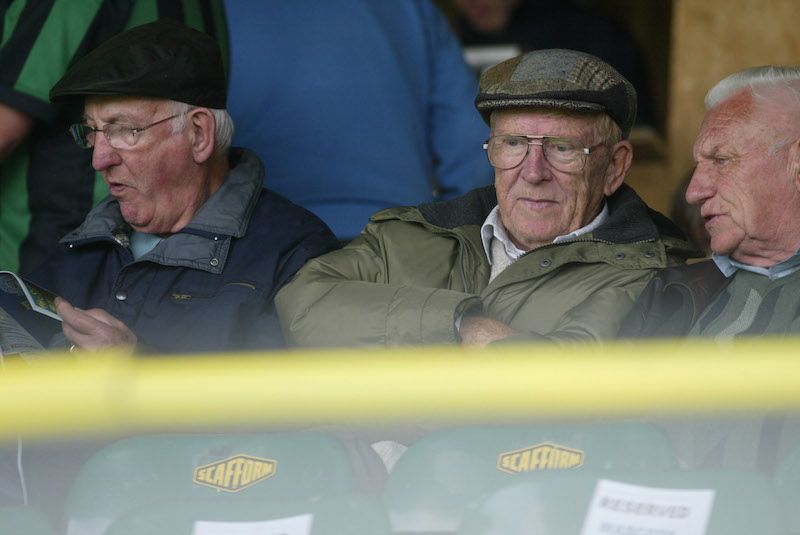 The encouraging tone of the late Derry’s Danny Breslin ‘ Wat about ye?’ was recalled at the weekend by a former Donegal Parian China worker from Ballyshannon whom I met outside St. Eunans Cathedral gate on Saturday morning awaiting the arrival of Danny on his final journey. This friend described Danny as his mentor who believed more in him than he believed in his himself.

Over the weekend Danny’s memory was recalled in so many circles. They ranged from the Irish Kidney Association, himself a transplant patient, from the early days when they started to build Courtaulds in Letterkenny to the starting up of Donegal Parian China in Ballyshannon to a man who would enjoy a conversation and the craic with you no matter who you were right through to a picture of him sitting in the stand in Finn Park with his next door neighbour Dan McTeague watching Celtic play Finn Harps, this Derry mans memory with keep the light of his memory burning in these difficult times that we miss him the most. 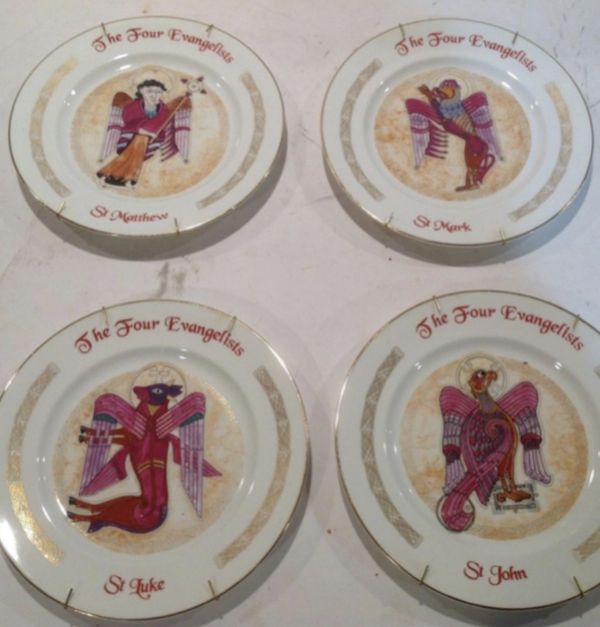 An artist impression of the four plates that came to a sad end the day we went to fix the cooker.

A set of the Donegal Parian China plates with Peadar’s artworks can be seen inside the reception in Ards Friary, A frame which includes the four evangelist were presented to Fr Mark by his four nephews Peadar, Cathal , Nelius and myself. When I seem them the next time they will have an extra memory that of the late Danny Breslin who we now sadly miss