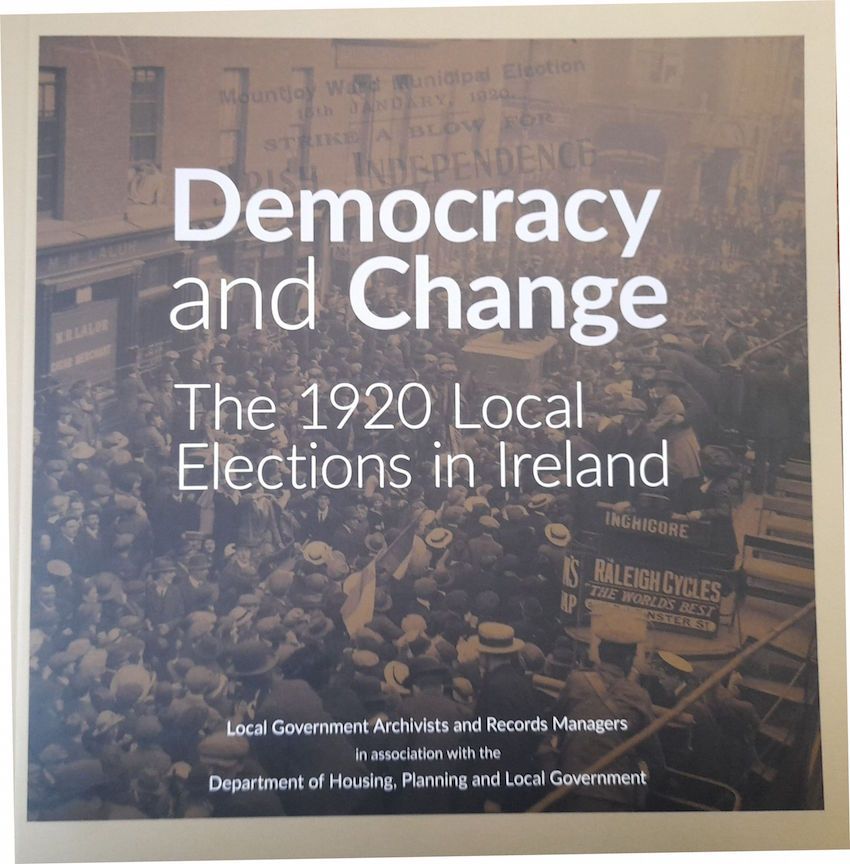 Donegal woman behind booklet to mark Centenary of 1920 Local Elections

A Donegal woman is one of the leading lights behind a free booklet to mark Centenary of the 1920 Local Elections in Ireland.

This year marks the centenary of the countrywide local elections of 1920 which were pivotal in the history of local government in Ireland.

To mark these events, and because of their significance for the struggle for independence, the Department of Housing, Local Government & Heritage has commissioned a bi-lingual publication from the Local Government Archivists and Records Managers (LGARM)   to commemorate these elections.

The 1920 elections were the first in which proportional representation voting was used for major elections. The elections are also crucial as they took place in the midst of the War of Independence and resulted in Sinn Fein candidates once again winning the majority of seats as they had done in the 1918 General Election. As a result most local authorities went on to declare allegiance to Dáil Éireann.

Archives of the Decade of Centenaries

In his Foreword to the publication, the Minister of State for Local Government and Planning, Peter Burke TD stated that ‘we are fortunate that our local authority archives services have such a collection of historic documents that allows us to study and understand better the context of perhaps the most important local elections in the history of the state’. The Chairman of the City and County Management Association, Mr. Michael Walsh, stated that the 1920 local elections were ‘a key point in the history of local government in Ireland’ and stressed the importance of marking these events during the ongoing Decade of Centenaries.

Chair of Local Government Archivists and Records Managers (LGARM), archivist with Donegal County Council, Niamh Brennan noted how local archivists have catalogued and digitised collections relating to the War of Independence and Civil War in their localities and how the local archives of the Decade of Centenaries can fill in some of the gaps in the history of what was a hugely significant time in Ireland.

The illustrated booklet is in English and in Irish and includes: a history of the background to the elections and local government reform and the decision to introduce proportional representation; sections on the borough, urban, rural district and county council elections in 1920; a section on the successes of women in the 1920 elections; a chapter on the role of local government during the ongoing War of Independence; and biographies of notable figures elected in 1920; it also includes images from local archives.

Images in the booklet from Donegal’s Archives Elections Collection include a letter from the Proportional Representation Society to Donegal Co. Council in 1919; a photograph of the new Returning Officers’ tables for PR 1920 elections; instructions to the presiding officer; a Notice of Elections; plus a record of the transfer of Donegal candidate Edward Kelly’s surplus votes.

This booklet is part of the LGARM’s commemorative projects for the Decade of Centenaries. It is available to download on various local government websites including Donegal Co. Council’s, at http://www.donegalcoco.ie/culture/archives/publications/. Donegal County Council’s Archivist, Niamh Brennan, is the Chair of the LGARM and was joint editor of the publication with Grainne Doran (Wexford Co. Council Archives).

Please find a digital copy of the booklet in English and as Gaeilge at the Department Website or the County Council website below: