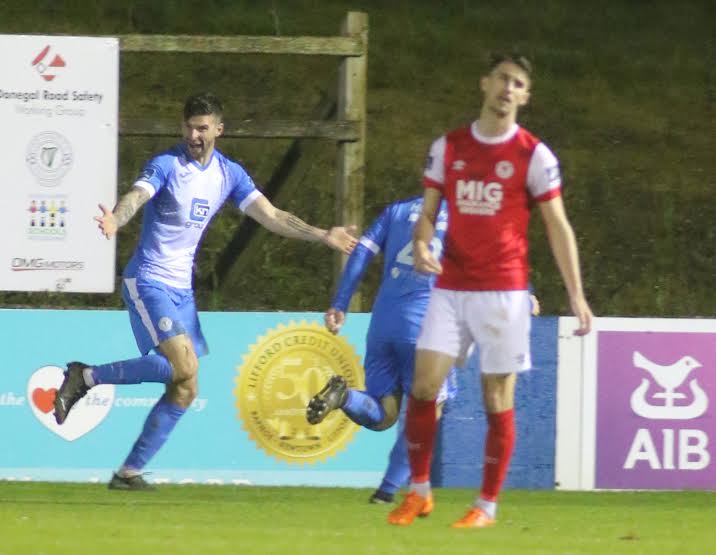 FOLLOWERS of Finn Harps are well entitled to believe that they now may even avoid a relegation play-off after a crazy night by the Finn.

Harps initially blew a two-goal lead, with Tooban’s Georgie Kelly pulling St Patrick’s Athletic level early in the second half, but Ryan Connolly’s penalty, with 16 minutes to go now has Harps in with a real chance of hauling themselves completely out of the mire.

With two home games to go, against Shamrock Rovers and Waterford United, Ollie Horgan’s men now have other sides – particularly Shelbourne, on whom they have a game in hand – in their sights.

Kelly netted twice earlier in the season when Pat’s won 2-0 at Richmond Park. Kelly has developed a penchant for scoring against Harps and the Tooban man nodded past Mark Anthony McGinley from Shane Griffin’s inch-perfect cross.

Early goals from Adam Foley and Stephen Folan had Harps 2-0 in front within 11 minutes, but Luke McNally’s instant riposte kept Pat’s in the hunt. 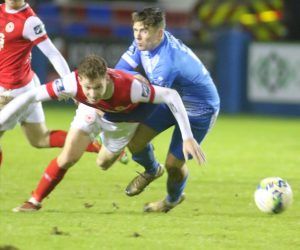 Kelly drew the visitors level but Connolly kept his cool to drill home a 74th minute penalty after Raffaele Cretaro, who had just entered the fray as a substitute a few moments beforehand, was fouled by Rory Feely.

Connolly had a chance to put the game beyond Pat’s reach when he surged away on 85 minutes, but Clarke got the necessary touch.

Harps were ahead after only three minutes. Foley got on the end of Mark Coyle’s ball into the right channel. A momentary slip by Luke McNally proved fatal as Foley expertly fired into the far corner for his first goal in Harps colours.

When these teams met in the FAI Cup earlier in August, Ryan Connolly’s early goal was enough to give Harps a slender win. 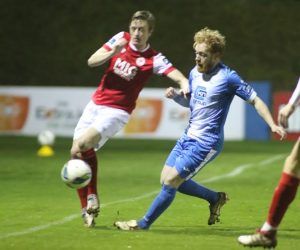 Here, though, Harps doubled their advantage in the 11th minute. Pat’s didn’t deal with Tony McNamee’s searching long throw-in and, when Dave Webster diverted the ball back across the goal face, Folan had the easy task of applying the finish.

The handful of Harps fans peeking through the fence from outside the ground were in dreamland.

Stephen O’Donnell, the Pat’s boss, who cuts a vocal figure in the technical area, fumed at the concession, but within a minute his side was firmly back in the game.

Harps couldn’t get rid of Robbie Benson’s teasing corner from the right and McNally atoned for the early mistake by stabbing home.

Coyle might have restored the two-goal cushion, but Clarke brilliantly turned over the top from the midfielder’s first-time shot. Ryan Connolly fed Mark Russell down the left and his cross was put only into the path of Coyle, whose crashing effort would’ve tested the strength of the River End net only for Clarke’s fingertips to intervene.

On Saturday night, Harps ensured that they avoid the automatic relegation spot as Russell struck twice in a 2-0 win at Bohemians. The win had Harps, with games in hand, eyeing up a few targets above them – Pat’s among them. 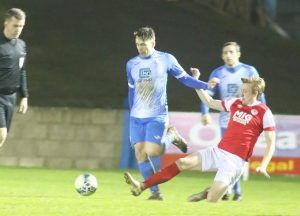 Russell went close to adding a third, but a stinging strike cannoned off the post with Clarke’s touch putting it behind for a corner.

Harps, who were already down the suspended Leo Donnellan, had to do without the injured Barry McNamee and Karl O’Sullivan, but there were recalls to the starting XI for Coyle, Connolly and Foley.

Pat’s were appearing for the first time in 25 days after a three-week hiatus related to a Covid-19 outbreak in their ranks.

Pat’s kept the same outfit that began the 2-1 win over the since-relegated Cork City at the start of the month, with their attack spearheaded by Kelly. 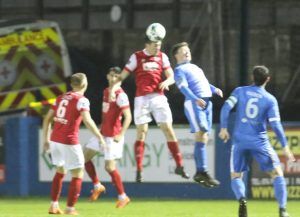 The Donegal man levelled the night but Harps missed a big chance to take the lead again 20 minutes from the end. The goalscorers but Foley, racing in to connect with Folan’s ball in, couldn’t keep his effort down with the goal yawning.

Soon, though, Connolly had Harps in front and they had another chance as right on the blow, a sliding Adrian Delap was denied by McNally just when it seemed as if he was to convert after Connolly rounded Clarke.

Harps held on for over five minutes of additional time and maybe, just maybe, they might yet avoid a regular visit to the play-offs.