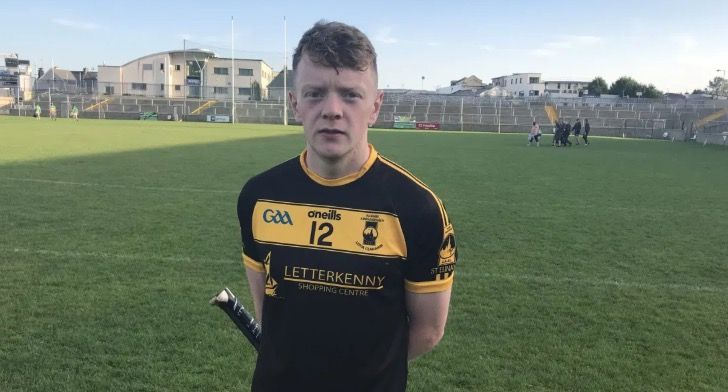 Donegal hurlers pull away from Armagh to reach semi-finals

DONEGAL hit three second-half goals to see off Armagh and book a place in the semi-finals of the Nicky Rackard Cup.

Kevin Kealy (pictured), Ronan McDermott and Conor O’Grady hit the goals as Mickey McCann’s side moved into the last four.

The teams were level at half-time but Donegal were in command for the second half.

A wonderful solo effort by St Eunan’s ace Kealy lit up a wintery afternoon at O’Donnell Park. Kealy surged through to fire past Simon Doherty, the Armagh goalkeeper.

A brilliant long-ranger by Gavin Browne opened up a six-point lead before Nathan Curry riffled a penalty to the Donegal net.

The Donegal response was instant as McDermott took receipt of a long ball in by Ciarán Matthewson to finish.

Gerry Gilmore, Jack O’Loughlin and Danny Cullen were on the mark as Donegal went eight clear.

Seven minutes from the end, O’Grady flicked in from a Matthewson free.

Donegal were without ace marksman and Armagh native Declan Coulter through an injury that forced his withdrawal from last weekend’s win over Longford at the same venue.

The Tir Chonaill men were dealt a hammer blow when Flynn had to leave the action with a hamstring injury.

The teams were level at the break with Donegal having surged 0-4 to 0-2 ahead early on with Flynn scoring three-in-a-row after O’Loughlin cancelled out Danny Magee’s opener.

Donegal had a goal chance on nine minutes, but Ronan McDermott fired just wide after a long ball created the opening.

Down the other end, Magee riffled wide and Donegal breathed a sigh of real relief.

Nathan Curry’s brace briefly had Armagh in front and Conor Corvan drew the sides level at the interval after Flynn scored twice.