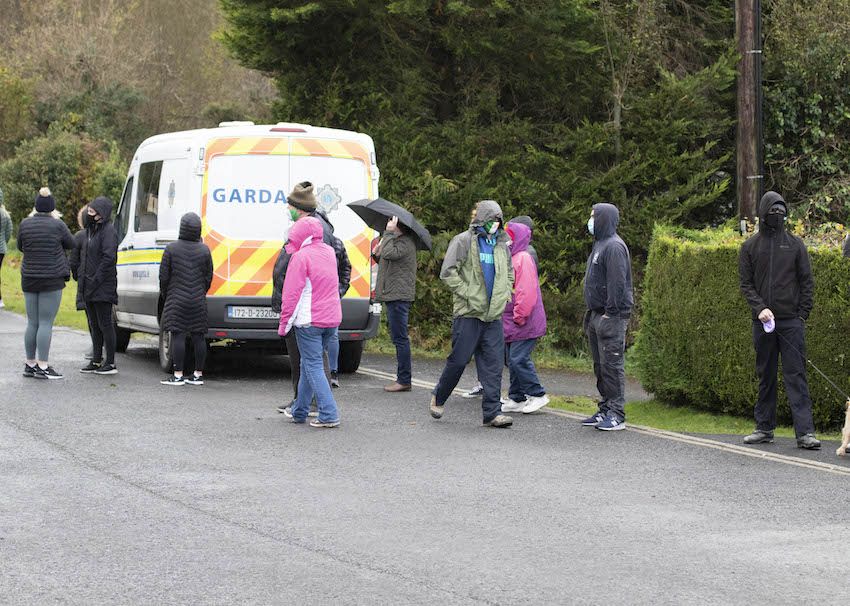 Dozens of people today staged a silent protest against a man who recently appeared in court charged with possessing dozens of images of child pornography.

Donard McLarnon recently appeared at Falcarragh District Court after being arrested at his Kerrykeel home by Gardai.

He was arrested after Gardai allegedly found dozens of images of child pornography on his phone.

The 51-year-old baker was charged with knowingly having in his possession child pornography to wit, 86 images and also two videos contained on an iPhone 6plus.

Garda Eugene Organ told the court that he arrested the 51-year-old at 4 Cuan na Tira, Kerrykeel.

Gardai said they had no objection to bail but asked for a number of conditions to be imposed.

They include that he surrenders his passport, signs on weekly at Milford Garda station, be of good behaviour and remain in contact with Gardai by mobile phone.

McLarnon was released on his own bail bond of €250 and Judge Kelly adjourned the case until January 20th next.

However, locals in the Kerrykeel area have expressed their outrage that McLarnon was released to live back within the community.

They say they are concerned the alleged offender lives less than 200 yards from a local school.

Up to 30 local residents today held a silent protest at the entrance to the small housing estate where McLarnon has lived for the past two years.

Seven Gardai, including uniformed and plain-clothes detectives, attended the scene and stopped the protesters from entering the estate.

One of the protesters spoke to a Garda Sergeant at the scene.

One angry resident said they had a right to express their concern that a man charged with alleged offences under the Pornography Act could be allowed to return to a housing estate where families were living.

“This man is entitled to have his case heard but we are also entitled to protect our children and to express our outrage that he was released and allowed to live here.

“He should not have been allowed to live here within such close proximity to schools and to housing estates where there are so many children.

“That is what we are annoyed about and we will continue to protest until such time as he is removed,” said the man.

A Garda spokesman confirmed they are investigating the incident.

A spokesperson said “Gardaí attended the scene of a small demonstration that occurred today Kerrykeel, Donegal, at approximately 11am this morning.

“An investigation focused on the organisers of this demonstration is now underway. The advice of the Director of Public Prosecutions will be sought in respect of any further actions to be taken.”

The spokesperson added that an Garda Síochána has no role in permitting or authorising protest marches or gatherings, there is no permit/authorisation required for such events.

“The Minister for Health signed the Health Act 1947 (Section 31A-Temporary Restrictions) (Covid-19) (Amendment) (No.8) Regulations 2020 in accordance with the Health (Preservation and Protection and other Emergency Measures in the Public Interest) Act 2020 which came into effect on 22/10/2020.

“In supporting the COVID-19 public health guidelines and regulations, An Garda Síochána has and will continue to adopt, a graduated policing response based on its tradition of policing by consent. This has seen Garda members engage, explain, encourage and, as a last resort, enforce.

“The COVID-19 Pandemic remains a public health crisis and An Garda Síochána continues to appeal to all citizens to comply with Public Health Guidelines and Regulations, in particular essential journeys, in order to continue to save lives.”