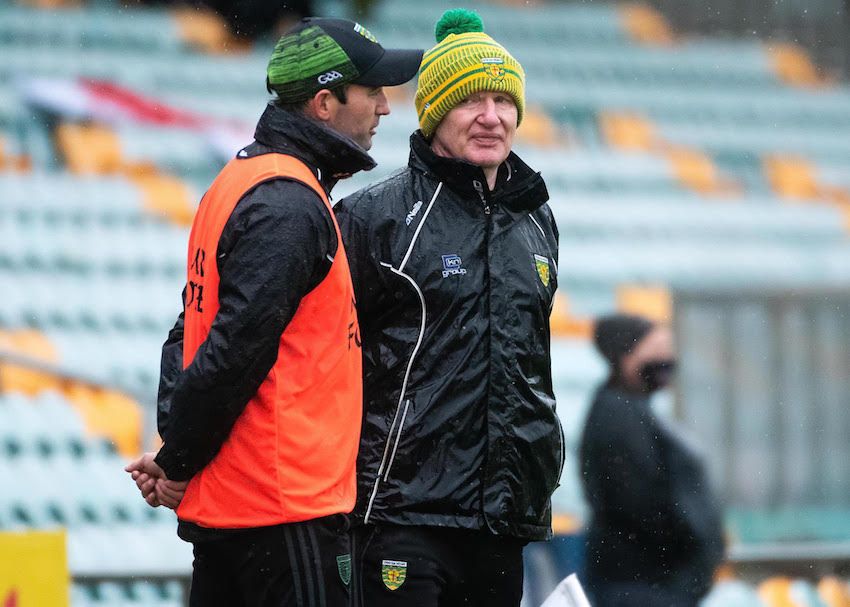 ‘He will be ready’ – Bonner insists McBrearty will make semi-final

DECLAN Bonner left his audience in no doubt – Donegal forward Patrick McBrearty will play in the Ulster semi-final.

Donegal will face Armagh on Saturday-week after seeing off Tyrone in a fierce battle yesterday.

Despite being named, McBrearty, who has been struggling with a quad injury, was kept in reserve and did not feature in the 1-13 to 1-11 win.

The Kilcar man warmed up in front of the stand, but Bonner didn’t risk the 2019 All-Star nominee.

“Paddy was very, very close – he was really, really close to starting or being involved,” Bonner said.

“The conditions just weren’t conducive to getting him back out there. He will be back on the pitch and he will be ready for the semi-final.”

Soaked to the skin as he conducted his post-match briefing from the middle of the stand at Sean Mac Cumhaill Park, surrounded by a socially-distanced press corps, Bonner was asked again about McBrearty’s involvement for the Armagh game. “Yeah, he’ll be okay,” the Donegal manager said.

Donegal lost Neil McGee to a back injury at half-time, but the Gaoth Dobhair was not considered an immediate doubt despite his enforced withdrawal.

McGee had a raw and rugged battle with Conor McKenna during the first half.

Bonner said: “With the physicality, Neil was always going to match up with Conor. He has played against many top forwards and he continues to do that.

“He put in a big shift there. He just had to come off at half-time.”