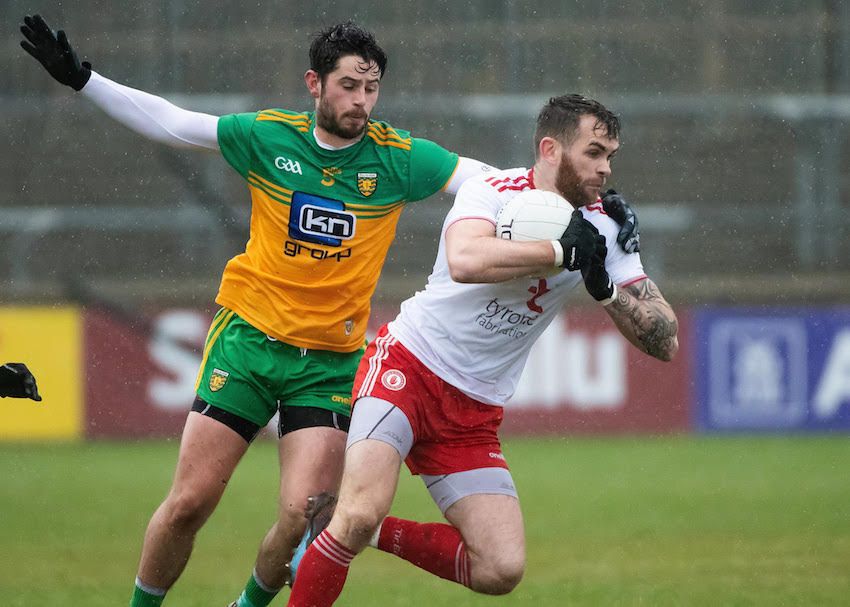 BENEATH the peak of his cap, Mickey Harte raged after Tyrone were sent crashing out of the Championship by Donegal.

Harte might well have managed Tyrone for the last time with yesterday’s 1-13 to 1-11 defeat in Ballybofey closing out his 18th Championship campaign as the Red Hands boss.

His tenure is up now as he has completed a three-year extension. If it is indeed the end of the line for the legendary three-time All-Ireland winning boss then he will leave with a sour taste.

If there were decisions in the game that could be debated then Harte left no ambiguity as to his own thoughts. The Glencull man railed at what he termed the ‘man-handling’ of Conor McKenna

It was put to Harte that McKenna was ‘well marshalled’ by Donegal.

“It’s a strange word to call it that,” Harte said.

“Marshalled sounds like something a job well done. If you ware watching what was happening in the first half there, I don’t think that was marshalling.

“I think that was man-handling and I don’t think he got the correct protection he deserved from the officials. So marshall, yeah, you can call it that. I would call it worse than that.

“To end up with Conor McKenna getting booked, now that’s a bit ridiculous I think, if people looked into the detail of that.”

Tyrone launched an 11th hour bid to try and clear defender Rory Brennan from a 12-week suspension after his red card in the League defeat by Donegal in Ballybofey a fortnight ago. However, the Disputes Resolution Authority upheld the ban.

“It didn’t seem to be a hanging offence that he was getting that for, so that’s disappointing,” Harte, dryly, opined. “It’s disappointing for him, because it closed his season out, but that’s life.”

It was the view of the Tyrone manager that neutral venues might have been used for the first round games in Ulster, or indeed that the draw could have been redone, after the elimination of the qualifiers.

Harte was frustrated with both his own players and referee Joe McQuillan as two key frees were moved forward, one in each half and both which were converted by Ciarán Thompson.

“That’s criminal in a game as tight as that,” Harte said.

Tyrone squandered 14 shots in the game as they fell to a sixth Championship loss to Donegal in the last ten years.

Harte said: “Life dictates that we didn’t get the result we wanted, so we have to live with that.

“It was a game we came to win, and a game I think we could have won, but history will tell that we didn’t.”

“The end result is that this was a knockout game, the odds were against us all the way and we almost pulled it off. That’s something to be consoled about to some degree, but not much when you know that’s Championship ’20 over.”

With that, he was getting up and leaving. Maybe, this time, for good.

“I haven’t considered anything about that just right now,” he said.

With 2021 already fast approaching, that consideration will come pretty swiftly.