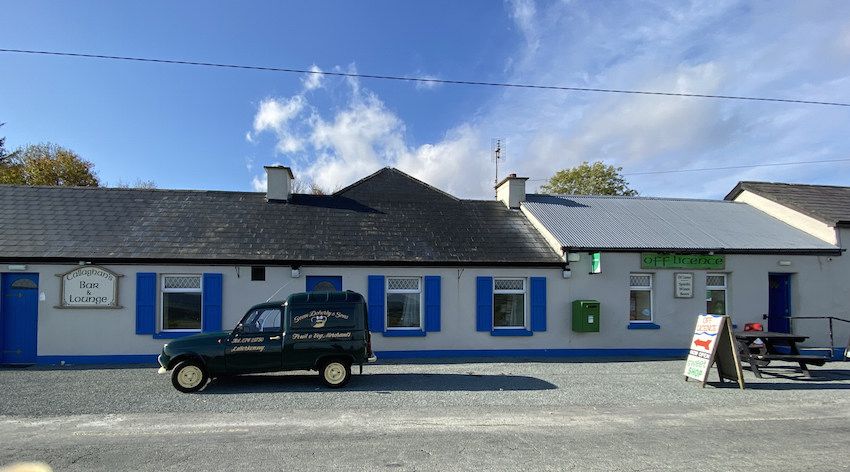 DD Motoring: Renault 4’s road to the past!

This is the place, the smallest thing, a slightest sense of motoring in days gone by, a glance through a sliding glass window and I was there. Moments earlier I thought I had lost the memory but I still have it, it’s still with me.

The phone rang on Sunday morning a few weeks ago. “Where are you sir?” was the question the caller asked.

Not recognising the number and not picking up on the voice I thought it was a ‘last minute.com job.’

It turns out I was right but I was happy enough with the request. It was the last Sunday of level 3 and a friend of mine, Sean Doherty was going for a spin in one of his vintage cars and asked if I wanted to join him on the last outing before he would garage his classics for the winter.

The number plate will tell us this wee Renault was 33 years old and was first registered in Dublin in 1987.

Renault 4 rules of the road

“There you are, you do the driving,” Sean said as he handed me the single silver key. “Show it to me a minute, there’s a way of putting it in” he explained as he handed me back the key in the right direction.

“Now keep the choke out for another while, she’s still cold. Now watch them drum brakes and remember you have no power steering.” 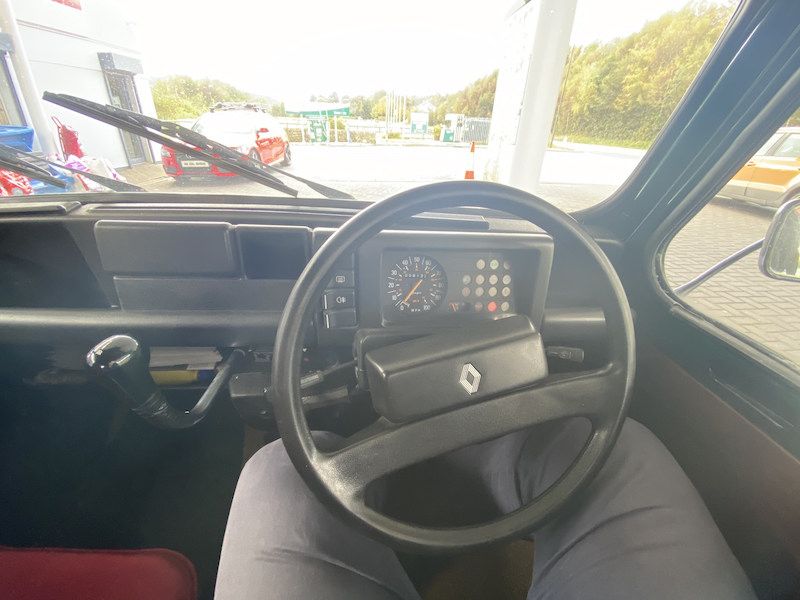 A view of the driving position of the old Renault 4 which we recently drove. Photo Brian McDaid.

It sounded like a lot of instructions but as I headed down the High Road after dying out at the traffic lights I realised I was back to real driving without the creature comforts that a modern car offers.

As we passed O’Donnell Park and eased the choke lever off and pulled the dash mounted gear stick all the way back for top (which is fourth gear in this era ) now we were on our way.

The accommodation in the front of this Renault 4 van felt a bit cramped compared to the wee Fiat Van that I came out of earlier that morning.

But as we pulled in for petrol and I got the sliding window pushed forward and got my elbow out to a very familiar and comfortable place I just had that Deja Vu moment I know I was here before.

That sliding window and the knob that released it opened a window to the past and to our own Renault 4L. That was many years before when our Renault landed at our family home in 1969.

I can only remember two letters of the number plate which also was a Dublin registration which had ‘ZL’ at the end of it which would have made our Renault around 1967 which would meant it was just two years old when we got it.

My father bought it from Robert Ward at his garage in Kerrykeel. We had a Standard 10 before that which was getting small for the six of us. Sadly, one of us would never travel in our new family car.

My father always told us that our mammy saw the car and said it was lovely but we knew she was never to travel in it passing away after a long spell in hospital on the 2nd of January 1970. 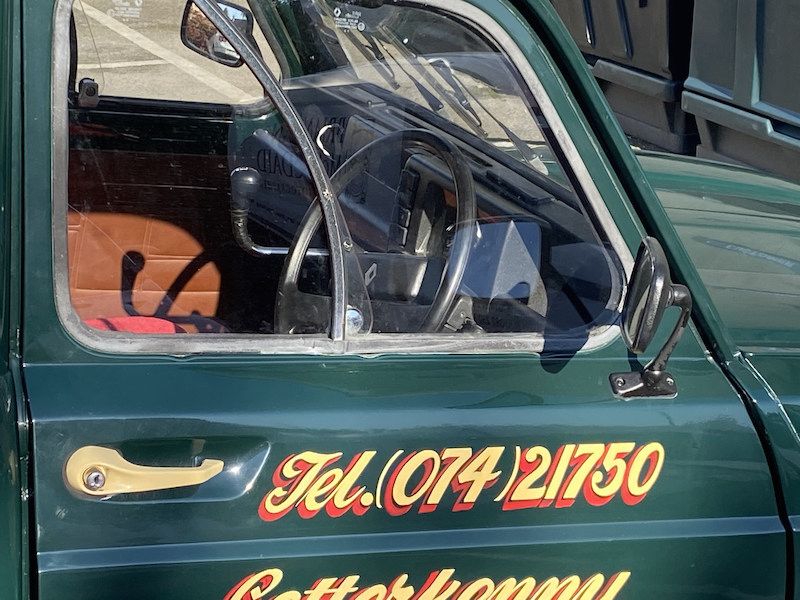 Being the oldest I was promoted to the front passenger seat in our new wee grey Renault 4 to the place where my mother should have sat.

To me, the Renault 4 felt fragile, very much like what life felt like to me at that time.

My father was a big man and the wee Renault 4 fitted him like an extra overcoat. Our Renault was one of the very first of its types around Glencar. I remember it being great in snow, very easy on petrol, ‘wee Betsie’ my father called it as he called all our cars, when they were going well. There was a different name for them when it wouldn’t start.

The first Renault 4 was the most basic; its headlights sat out separate from its grill, I always imagined it as having a sad face.

I had a sad face too one day when playing in the car, letting on I was a grown-up, sitting stationary letting on I was driving , imagining I was meeting other cars on the road , waving and flashing the lights to them until I left the lights on and flattened the battery.

I remember my late uncle Hughie was up that following day and started the car by hand using the opposite side of the wheel brace which doubled as a starting handle fitting into a slot above the bumper to turn the engine over and fire the wee Renault 4 engine to life.

This was just one of the very practical ways that Renault made this very mode of transport , 50 years on and this Renault 4 van which was made in 1987 that we drove a few Sundays ago still has the location slot, now hidden behind a bigger bumper for that starting handle which never was removed.

Things like this about the Renault 4 makes it such a car to recall memories. The very first Renault 4 and the very last one ever made all had the exact same body shell, same taillights, same sliding windows, same handles on the inside to open the doors, same memories. 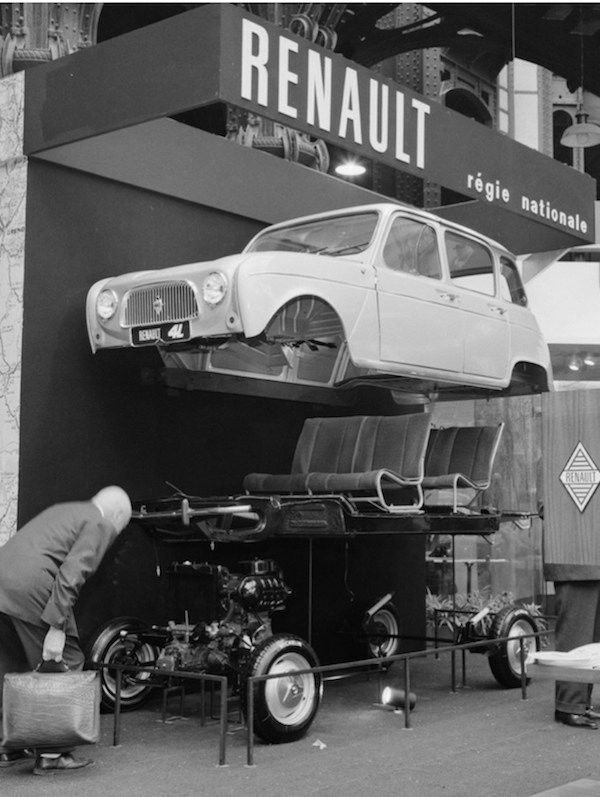 A cut away section of the Renault 4 gives you good idea of how basic the were.

The Renault 4 in van form was once the mode of transport for every postman in Ireland.

After the postal strike in the 70s, I spent a full day with a foot pump blowing up all the deflated tyres on a fleet of Renault 4 post van in the old yard at the telephone exchange just off the Main St in Letterkenny.

I was working for Andy Hegarty who was the agent for Renault at the time. I looked at the familiar three stud wheels on them and thought I was looking at the end of an era for the Renault 4. It was nearly 20 more years after that before Renault finally called it a day on the best selling car they ever made.

On our Sunday run out the wee Renault climbed its way up into Churchill where we spotted a shop opened at the side of a pub.

Parking up we are in getting a few coffees and the wee Renault has admirers outside, two mechanically minded brothers Frank and Pat McConnell, are pointing how practical the Renault 4 was.

Talking about the walking stick gear stick that was operated from the dash which went away over the engine to find gears in the gearbox at the very front of this very different car.

Our Renault turned heads when it was out for a run a few Sundays ago, if it was your local postman’s mode of transport for many decades the Renault 4 wasn’t that fragile as it looked when it first arrived on this island in crates to be built on assembly lines by the Smith Group.

The Renault 4 with its very different suspension was happy on both side of the road here or on the continent even was happy when there was no road at all with its long wheel travel . It could make light work of going off road.

Our old Renault at the weekend took us back to basics, which is no harm now and then. I have included a wee video of our day out , and some of the sights of the way a Renault 4 is made that makes you feel as if things have never changed.

When I was putting this write up together in my head one night I was out for a walk on a road that I travelled all my life in Letterkenny.

The memory of the first Renault 4 sparked by Sean Doherty’s Classic Renault van plus the quietness of the roads in this present lockdown made me think of these roads on winter’s nights years ago when there wasn’t a car on the road which was the norm in the early seventies.

This lockdown in the winter is different from the one on warm spring and summer days but we need to take it in our stride , value what you have got around you, get out even if it’s only for a small walk. 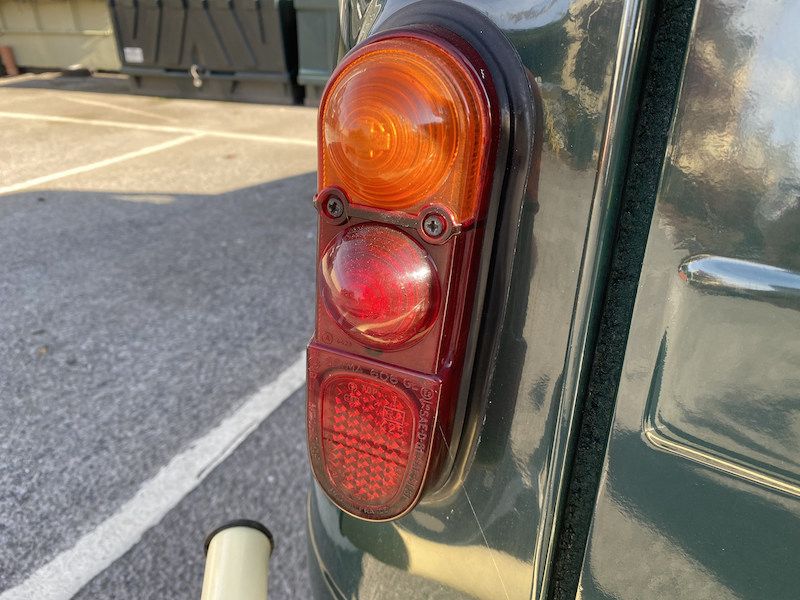 The Taillights of the Renault 4 which have change from beginning to end of production. Photo Brian McDaid.