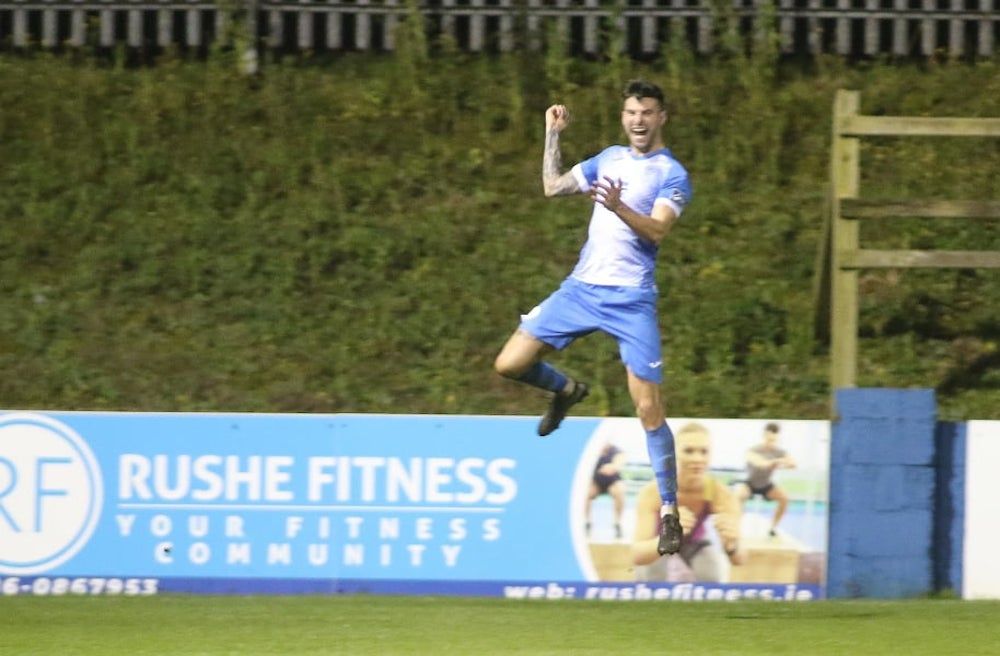 FINN Harps pulled off their Great Escape as Adam Foley struck the only goal of the season to preserve their top flight status on a dramatic final night of the season.

Foley’s goal on 27 minutes proved crucial in ensuring that Premier Division football will be back in Ballybofey in 2021 – but that only tells a part of the tale.

Five minutes into added time, Waterford sub Kurtis Byrne had a glorious chance to level the tie. After a mix-up in the Harps penalty area, Byrne’s shot was remarkably blocked on the goal-line by the excellent Dave Webster.

A goal and Harps would’ve been heading for a relegation-promotion play-off on Saturday.

Instead, Paul McLaughlin shrilled the final whistle and the Harps squad were off to toast a sizeable crowd who had watched from behind the River End fence. The pity here was that more of them couldn’t be in attendance to add their atmosphere to the theatre.

Ollie Horgan has repeatedly told how he’d take a battle for survival on the final day with both hands. With his team already having avoiding the automatic relegation spot, Horgan’s men came here hoping to avoid the lottery of a play-off that has felt like an annual fixture down Navenny Street in recent times.

After a tense opening, Harps hit the front. Alexander Kogler slipped through for Barry McNamee, whose teasing centre was met by the sliding Foley to put Harps in front, despite the best efforts of the covering Niall O’Keefe. 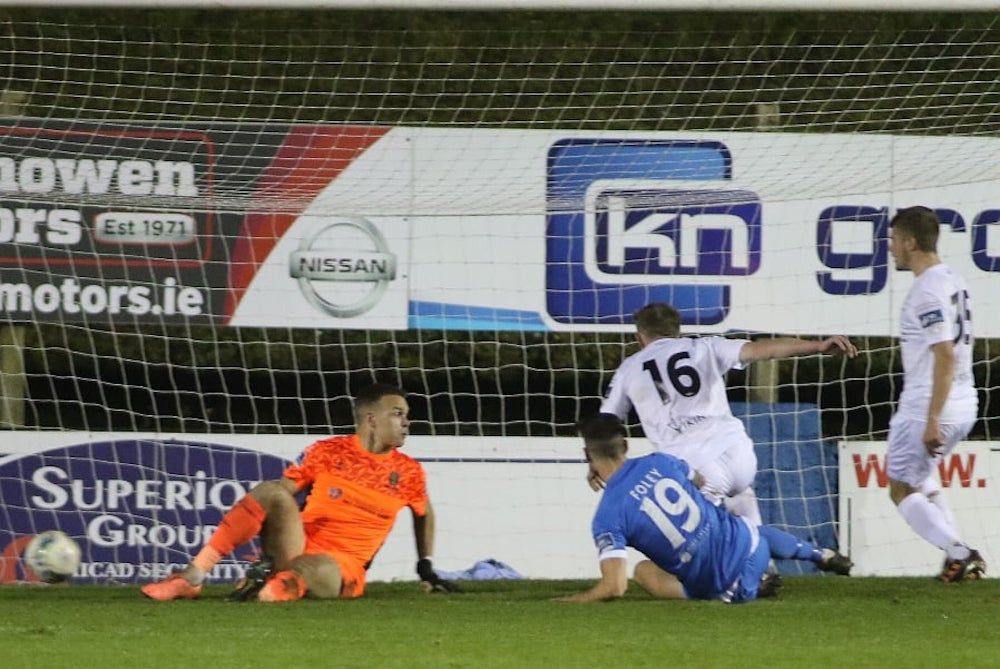 News had just come in of Jack Byrne breaking the deadlock for Shamrock Rovers at Harps’ play-off rivals Shelbourne and Foley’s goal lifted Harps to safety in the in-play standings.

Murphy saved low from Foley before Kogler headed inches over from a Ryan Connolly corner as Harps sought to turn the screw.

On 66 minutes, Dave Webster headed off the bar as he got on the end of a searching ball from deep by Stephen Folan. Eight minutes from the end, another Webster header caused panic for Waterford as the in-rushing McNamee looked like he might convert.

Seven minutes from the end, Kosovar Sadiki saw his headed goal ruled out for an infringement and the looks at the timepieces – and the updates elsewhere – increased.

A good run of form lately saw Harps move away from the relegation spot and with a real chance of avoiding the play-off. 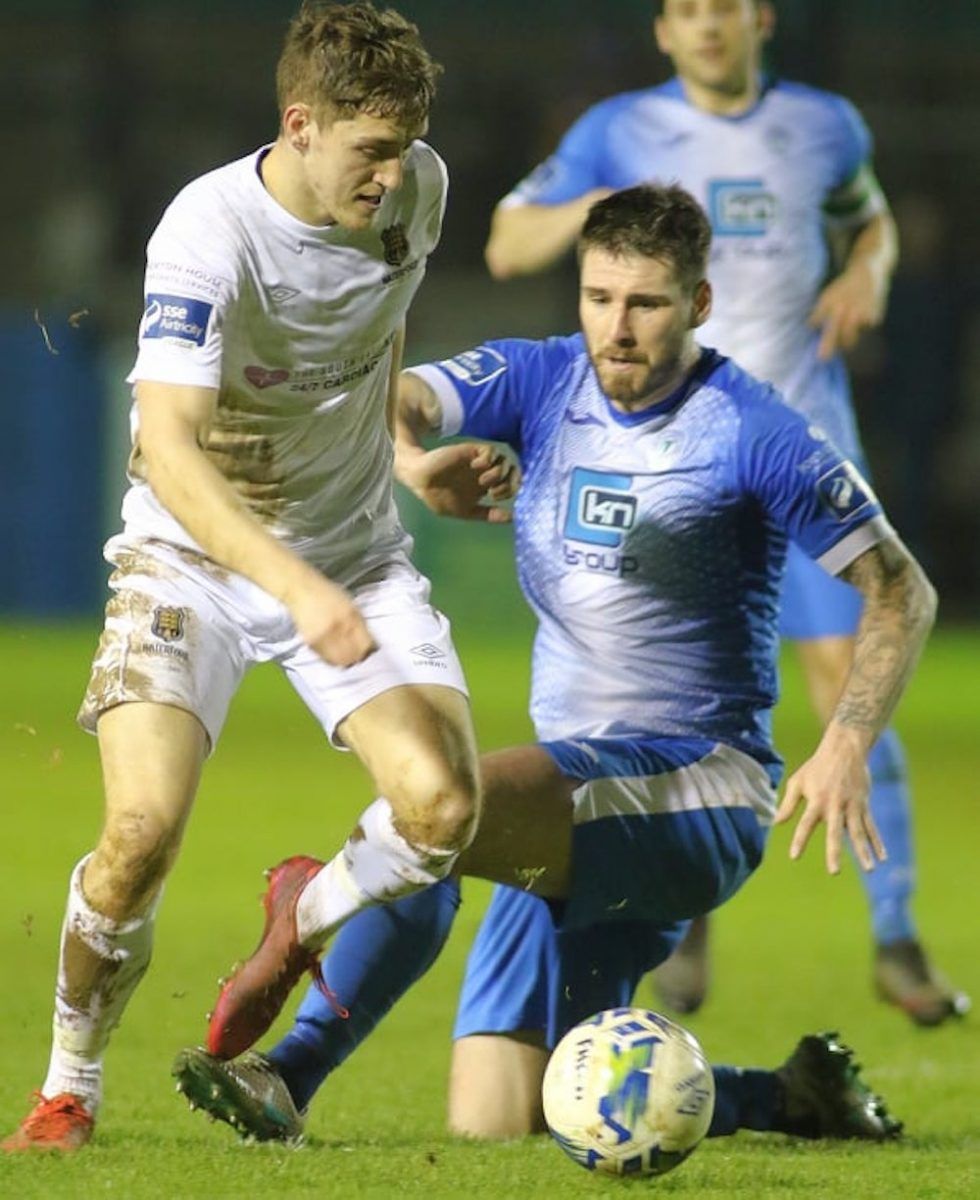 Foley was denied by Brian Murphy just ten minutes in and Murphy beat away a stinging first-time effort by Webster soon after.

With their eyes firmly on capturing a European berth, Waterford made the trip to Donegal yesterday afternoon. John Martin’s goal saw Waterford defeat Dundalk 1-0 last time out and the Blues made just one change to their line-up, with Robbie McCourt taking the place of Will Fitzgerald.

Ali Coote tried his luck with an ambitious attempt from distance eight minutes in, but his long-ranger failed to trouble Mark Anthony McGinley.

The Harps ‘keeper had to be sharp off the mark to stave off the advances of Matty Smith. The lively Smith managed to get the better of the Harps offside trap to get clear for a 16th minute opening, but McGinley averted the danger.

Martin brilliantly fashioned a big chance of an equaliser for the visitors but, with home hearts in their mouths, he blasted wide of the target.

Just after the re-start, Murphy turned away from McNamee’s left-footed effort.

Waterford delivered a reminder with McGinley palming away from Smith, who went to ground sparking claims for a penalty that were firmly waved away by referee Paul McLaughlin.

Harps, as is their wont, had to endure a nervy finale and when the chance opened for Byrne, Harps momentarily lived a nightmare.

Webster – who had an outstanding game – came to the rescue and the big guns will roll around by the Finn again next year.