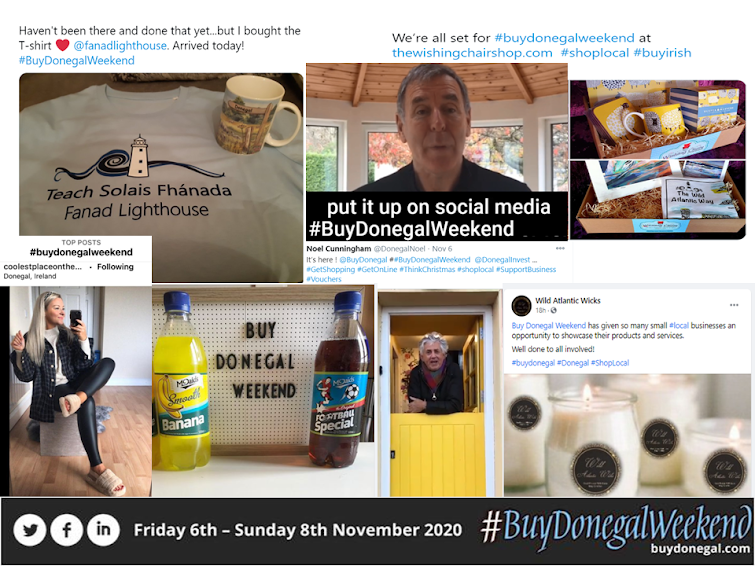 ‘Phenomenal’ response to #BuyDonegalWeekend from hundreds of businesses

ANYONE following social media last weekend would most likely have seen the hashtag #BuyDonegalWeekend feature prominently.

The campaign which celebrated and showcased Donegal business to a global audience received an exceptional response reaching an audience of over 5 million on Twitter alone!

Similar responses on Facebook and Instagram saw the campaign reach a global audience and place Donegal brands in the minds and hearts of many!

The supporting website buydonegal.com had a constant flow of traffic over the weekend with visitors from over 40 countries.

Over 200 businesses from designers and makers, food & drink producers and retailers were involved in showcasing the best of Donegal business.

Speaking about the campaign Cathaoirleach of Donegal County Council Cllr Rena Donaghey said:”We are just thrilled with the response the campaign has received. We encouraged people to get behind the campaign and support Donegal business and they certainly did.

“To have such a positive message and response from everyone involved is so encouraging, particularly with the challenges businesses are facing this year. Many of our brilliant ambassadors of Donegal got behind the campaign too which really helped and I’d also like to thank our media partners for the important part they played in highlighting the campaign.”

Donegal County Council Director of Services Garry Martin said: “we know the business community in our county are facing lots of challenges right now and this campaign provided a platform for them to showcase their talent and innovation.

“We’ve received some wonderful feedback from businesses that have had a very successful #BuyDonegalWeekend. For us, this is wonderful news and shows the importance of initiatives such as this which collectively support one another.’”

With the emphasis on supporting Donegal business still very much to the fore, #BuyDonegalWeekend has now become #BuyDonegal.

Martin added: “We will continue to promote and support the idea of #BuyDonegal to help all of our businesses as we countdown to Christmas. This will be of particular importance when many of our shops and retailers reopen their doors.”

For the people of Donegal near and far you can continue to see the wonderful range of business offerings available by visiting buydonegal.com and show your support by posting on social media with the hashtag #BuyDonegalWeekend or as Gaeilge #CeannaighDúnnanGall.