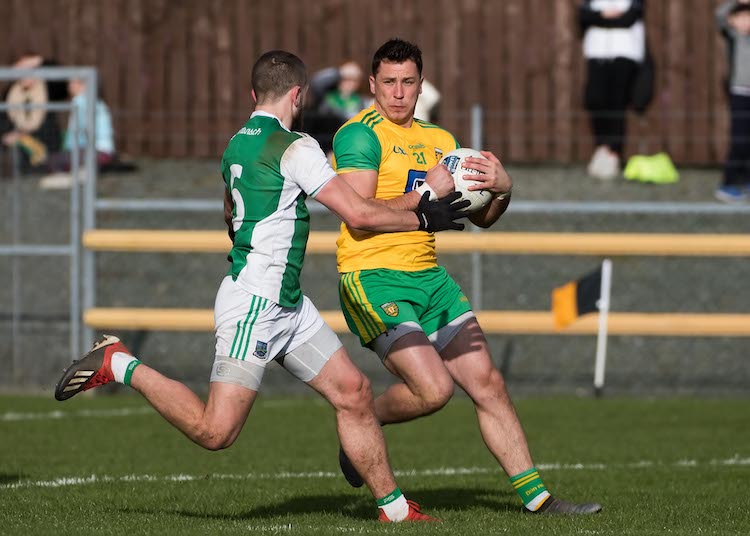 Brennan ready to go into the deep end with Donegal

PAUL Brennan is well versed in dealing with choppy waters.

A professional diver by trade, the Donegal defender is bidding to keep the Tir Chonaill heads above water in this strange campaign.

In a straight knock-out Championship for the first time in 20 years, it’s a case of sink or swim for teams.

Ulster champions Donegal have become adept at repelling the waves, but there’s no second chances now.

“It adds another element to the game,” Brennan says ahead of Saturday’s Ulster SFC semi-final with Armagh. Definitely.

“You can’t rely on your training that you’ve done or a game plan. You can’t reply on your key men winning the game for you.

“All of a sudden, it becomes about the 50/50 battles and who wants it more.

“It boils down to who is winning that breaking ball, who is putting themselves in there. At the weekend, that’s what will win the game. It’ll boil down to that.”

Brennan celebrated his 28th birthday on the weekend Donegal defeated Tyrone in the quarter-final.

It was certainly a birthday with a difference.

He said: “It was the best present I could have asked for. It was pretty surreal – especially when we had the two weeks off.

“Usually, you might look to go to the local and have a couple of sneaky pints. On this occasion, it was straight home, a bite of dinner and focusing on recovery. It is strange times, that was the two sides of the coin, but it’s something we all have to deal with.”

Donegal are gunning for a third Ulster title in a row with Declan Bonner’s men looking to create a slice of history.

Donegal have never done three-in-a-row, but they have been driven this year by the memory of Super 8 defeats by Tyrone Mayo.

Brennan said:  “Our first nights back, we didn’t talk about the finals – we talked about the defeats to Tyrone and Mayo.

“It was the defeats that were the sickener. They far outweighed the win. We know what this group is capable of on their day. We were under par in both those games.

“That’s what keeps pushing us to get the best out of ourselves as we feel we’re capable of competing with any team in the country on our day, but you have to be good every single day.

“That’s the challenge this year. You’re into training on the Tuesday and the focus is on what’s in front of us. You look to go even harder that night to squeeze those extra wee margins out of yourself.”

Donegal had to roll their sleeves up to get over the line against Tyrone. Michael Langan netted a crucial goal in the first-half and seven points by Ciarán Thompson proved golden.

It took Donegal some time to settle and they were 0-5 to 0-1 behind when the water break in the first half allowed a moment of reflection.

Brennan said: “We knew we were in a dogfight, but we still wanted to express ourselves going forward.

“We didn’t want to retreat into a shell and look to absorb Tyrone’s attack. We stuck at it and looked to put them on the back foot.

“After the water break, we started to ask more questions of ourselves and Tyrone. You have to be brave. There was still so much time left in the game. No one would be throwing in the towel. You just have to stick at it and trust the boys around you.”

Brennan is a Project Manager with Dive and Marine Contractors Ltd.

Before the Covid-19 lockdown, his day-job entailed plenty of 12-hour shifts and endless miles of travel. The company specialise in projects such as bridge, pipe and other infrastructure repairs underwater.

These days, the Bundoran player is based at home.

He said: “There’s not too much in the north-west here that would keep you in a full-time role.

“A lot of my work would’ve been in Cork, Dublin, Kilkenny, which is putting in big hours in travel. Now, on the flip side, when Covid hit, I took a step back and it allowed me to do a lot more from home, and I could make it an opportunity to work on weaknesses and strengths and how to get better.

“Being at home allowed me to be a lot more professional in this campaign. It just coincided with everything that has happened this year, between working away and getting a chance to be at home more for recovery.

“It gave me a chance to brush up, so in my sense it worked in my favour this year.”

Meanwhile, Bonner expects to have Patrick McBrearty and Neil McGee available for Saturday’s game. McBrearty has recovered from a quad injury and McGee has ahaken off a back ailment, but Donegal will be without Paddy McGrath, who picked up a knock in training.