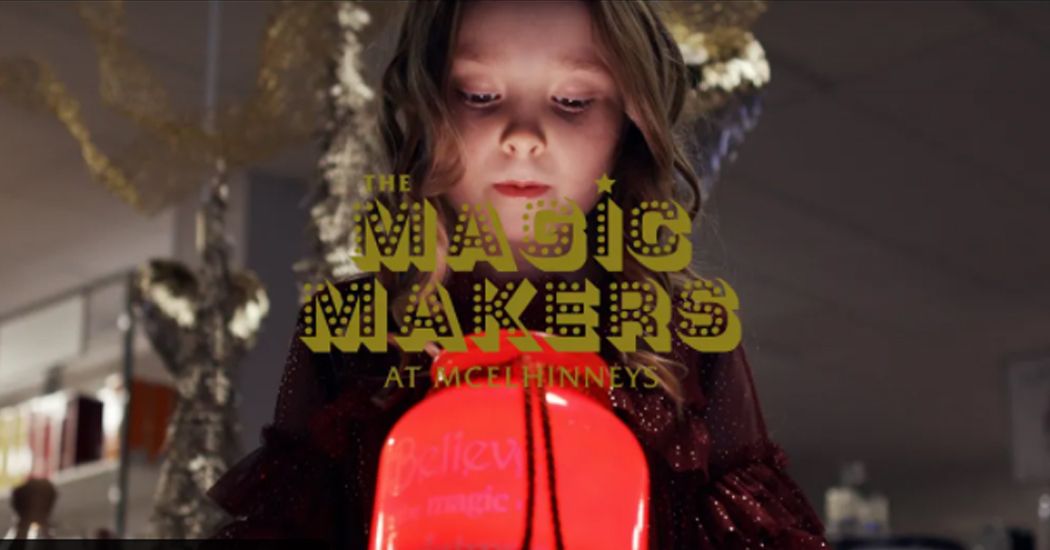 McElhinneys of Ballybofey have added a touch of magic to their Christmas 2020 campaign – which was officially unveiled this evening.

2020 has been a year like no other, and for the McElhinneys team it has been no exception, including the owner and founder of McElhinneys, John McElhinney himself. John is a proud businessman, employer, husband, father, and grandfather, known throughout Donegal and further afield.

With all this in mind, the Creative Team in McElhinneys set out to create a Christmas Campaign that reflected the values of the business; that family is everything, and there is magic to be found in the every day.

Despite the difficulties the store has faced during 2020, the team rallied together to create a window titled ‘The Magic Makers’. Armed with magical and wonderful ideals, the team began to build the wonder of Christmas and the story of the magical toy factory through a child’s eyes. Starring in the campaign this year is John McElhinney alongside his grandchildren James, Hannah, Shaun and Jack. As always, everything in the window is designed and created in store, and the team wanted to create marvel and movement within the space of the windows, which you can see in the story throughout the panes. 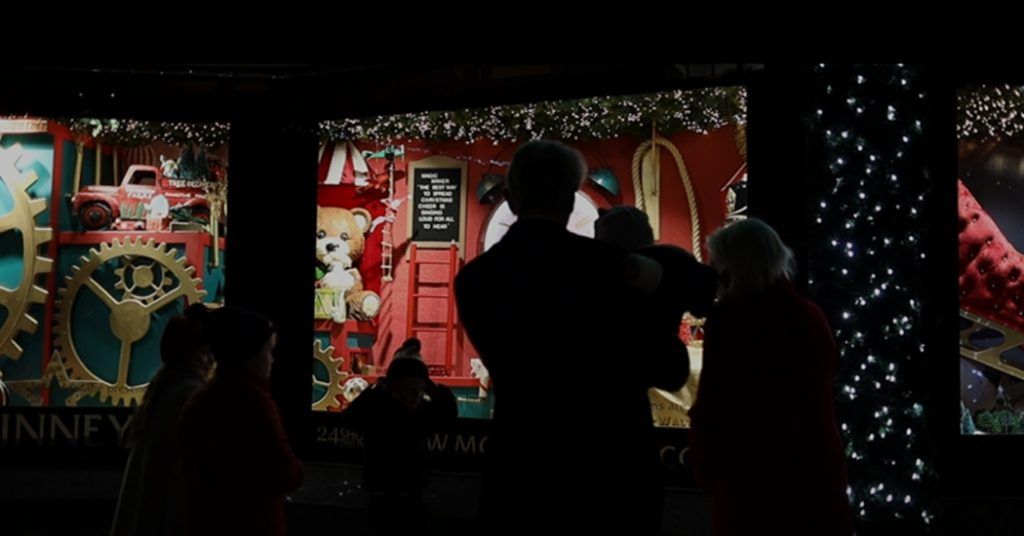 Usually a day when thousands gather on the Main Street of Ballybofey, County Donegal, the McElhinneys Creative Team had to think of a new way to celebrate the unveiling of their Christmas Window this year. Understanding the need for some extra special charm, the team pivoted to a virtual launch, utilising all their social media channels, so the wonder of the windows this year could be enjoyed all over the world.

The story behind this year’s window:

The window this year has lots of special elements that the team have spent time deciding on and creating. The window is as sensory as possible, with lots of movement in the strong visual windows, along with the sounds playing outside which help to create the scene before your very eyes. If you cast your attention to the television screen in ‘Santa’s Cabin’ you will notice a compilation of photos and videos. 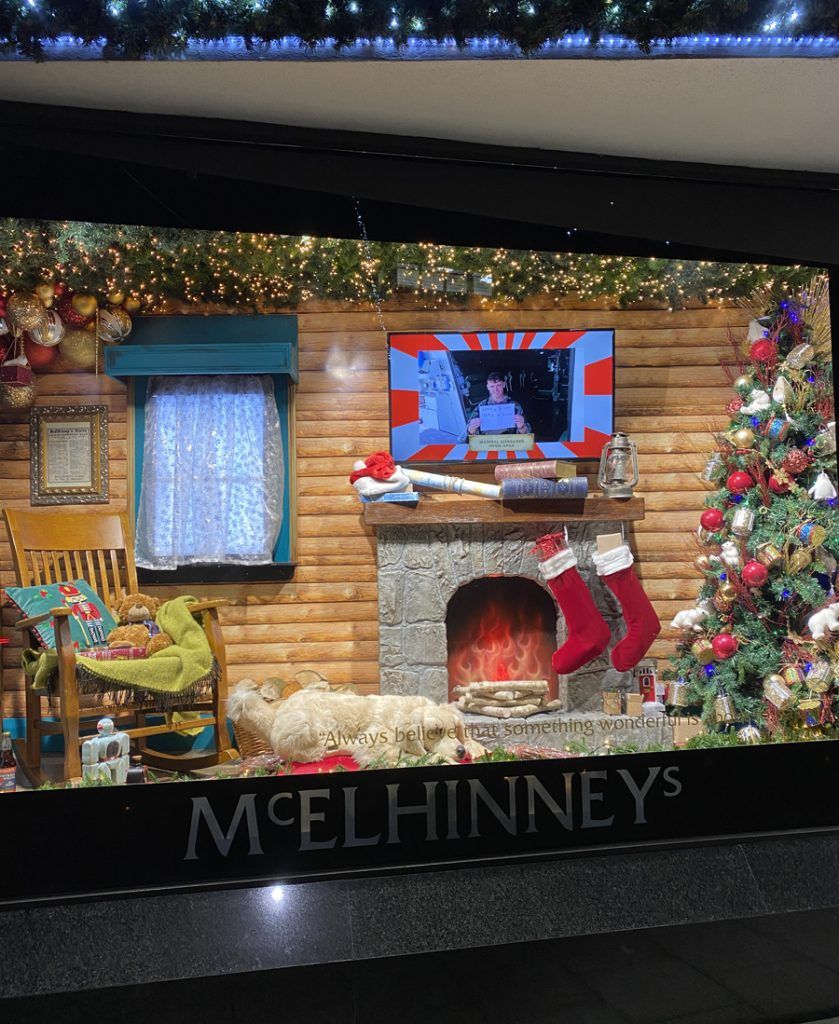 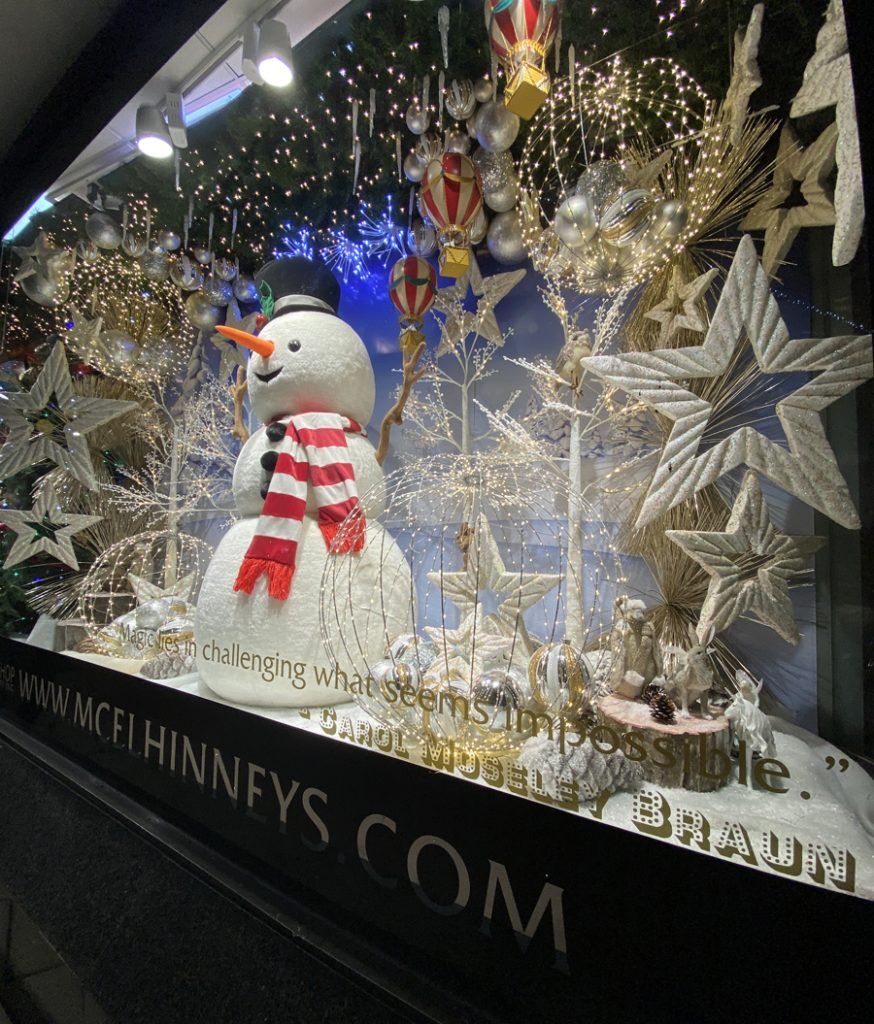 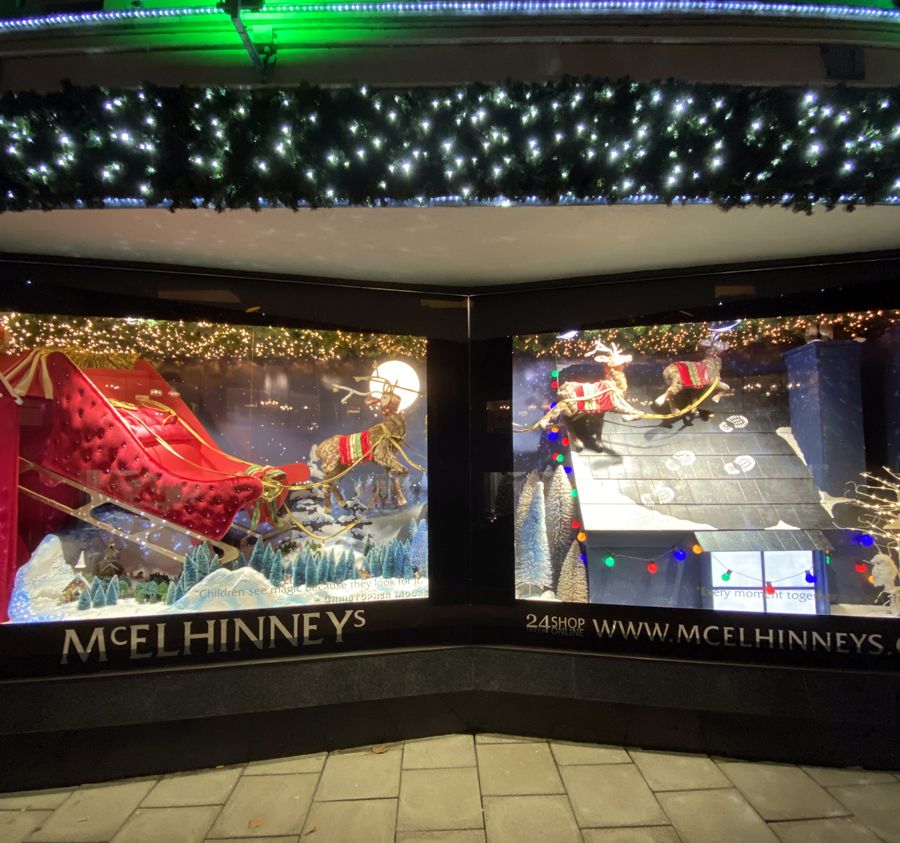 Understanding that this year more than ever it is unlikely that those abroad will be able to travel home due to the pandemic, McElhinneys posted a call out on their social media for families abroad to share a special message with their loved ones. These heart-warming Christmas messages were compiled by the team to surprise local families who would usually come to Ballybofey to view the Christmas windows each year including special messages from the Defence Force 62nd Infantry Group, UNDOF based in Golan Heights in Lebanon.

Furthermore, on each window pane, you will notice quotes that have been carefully selected by the creative team for their positivity, mindfulness and wonder, which is something we could all use this year. 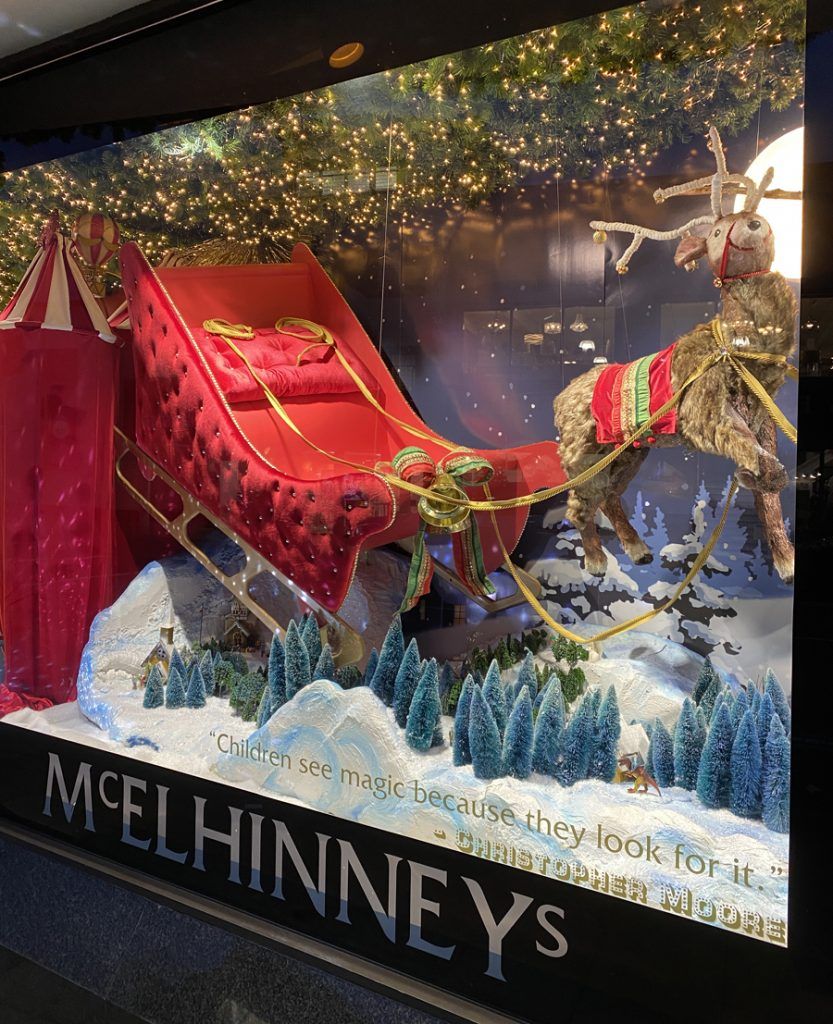 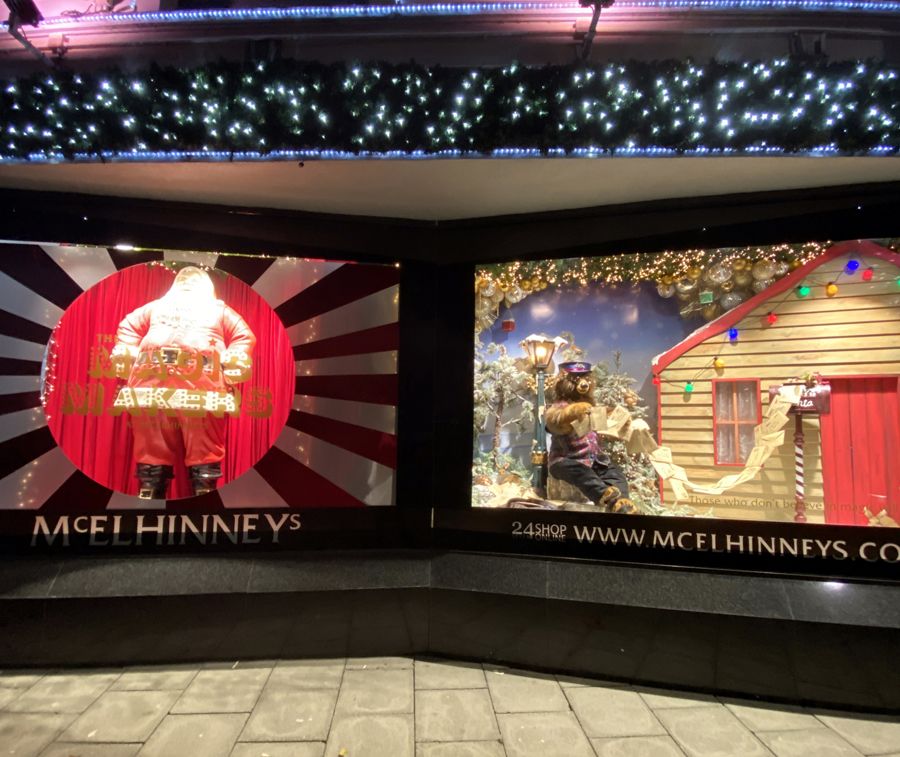 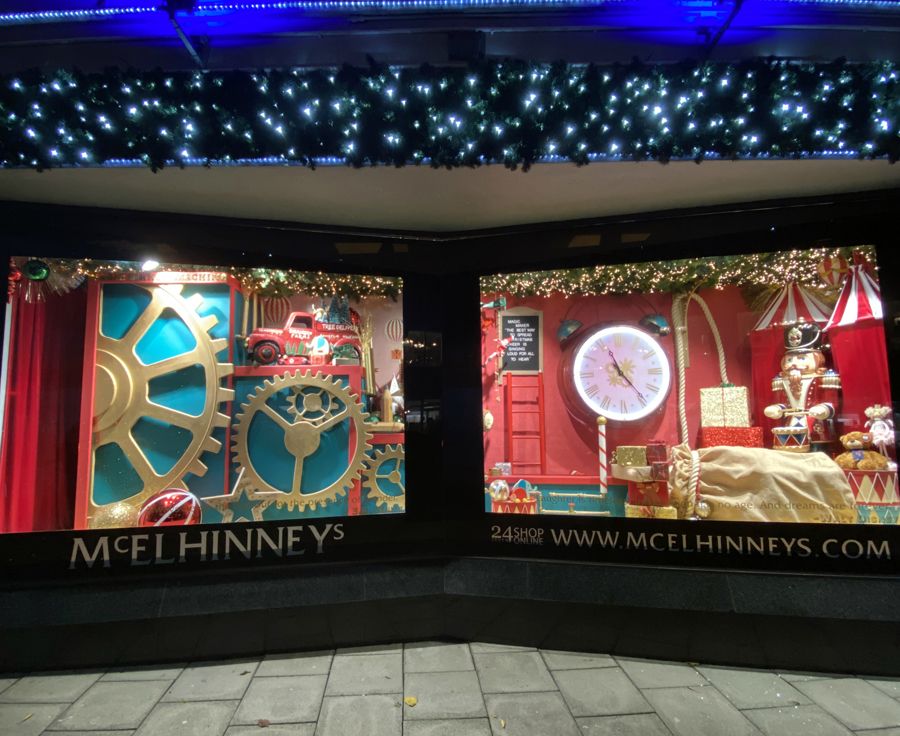 McElhinneys are delighted to unveil their window this year despite the hardships that families and businesses have had to endure throughout 2020. Following on from winning the ‘Drapers’ Independents Christmas Windows’ in 2019, the store is also looking toward 2021 to celebrate their 50th Anniversary. With lots of exciting plans in the pipeline for 2021, McElhinneys hopes for a busy Christmas Season ahead and wishes to thank customers for their support throughout 2020.