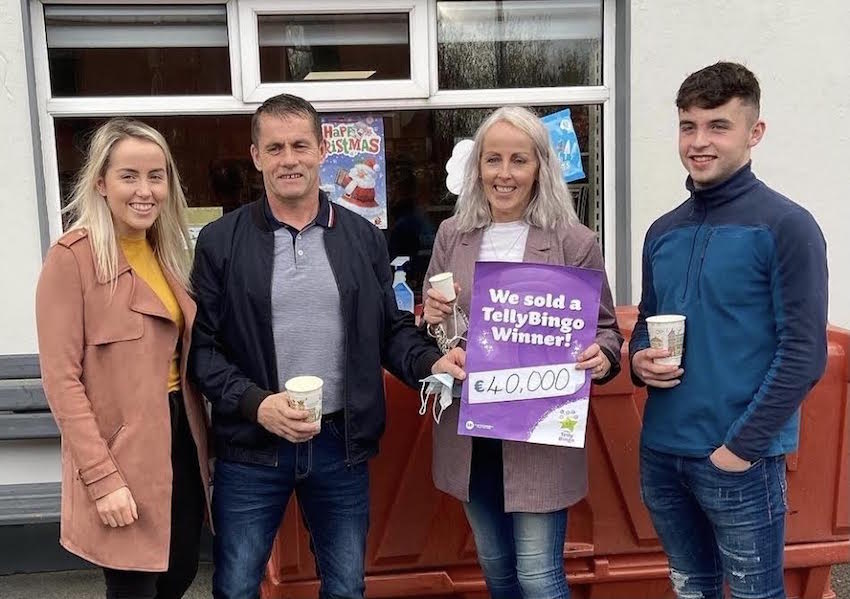 Margaret Carr revealed she rushed home following a dentist appointment to watch a recording of the show after she learned that a local person had won the snowball prize.

Margaret, from Carrick, is a life-long Telly Bingo player who regularly watches the Telly Bingo show on RTÉ every Tuesday, Thursday and Friday but ironically missed the all-important show when her €2.50 ticket netted her a snowball prize of €40,014!

“I completely missed the show. I was at the dentist and by the time I got home, word had spread throughout Carrick that the winning ticket was sold in the local filling station where I had bought my ticket.

“Obviously, you hope you might have the winning ticket, but you can never be sure until you see the numbers come out with your own eyes!” she said.

Margaret has been married to her husband Seamus for over 28 years and they have two children, Amy (22) who is a Garda in Castleblaney, Co. Monaghan and Eric (18).

The entire family excitedly gathered around their TV set as they watched Margaret’s number roll out of the TellyBingo drum to confirm her €40,014 win.

“I was at home with the family and they all wanted to scan the ticket on the National Lottery App to see if I won but I wasn’t having any of it! You don’t get the same buzz of TellyBingo by scanning your ticket on a phone.

“I turned on a recording of the show and we all watched rather nervously as my numbers come out one by one but at the end of the show, I still had two numbers remaining, 03 and 22. Despite the initial excitement, we were slowly coming to the realisation that maybe we weren’t the winners at all.

“My daughter, Amy had been looking over my shoulder the entire time and she lets out this roar that the two remaining numbers had already been called out and we’d definitely won it. It was honestly the most exciting moment we’ve ever had,” she said.

So far this year, an astonishing €13.6 million in prizes has been won by over 1.5 million players in the TellyBingo game, including 22 winners of the Snowball top prize.

Margaret was the latest National Lottery high tier prize winner to claim her prize through an approved postal claims process which has been introduced by the National Lottery due to the on-going pandemic.

“I have the all-important National Lottery cheque in my hand. It’s nice for the postman to deliver such a nice parcel instead of the usual bills,” she laughed.

“I have plenty of plans for the money. We have a few renovations we need to do around the house and we definitely need to do up the garage. After that, we’ll put a few bob aside and we’ll enjoy a nice family holiday away next year when we are free from this COVID-19 business,” she said