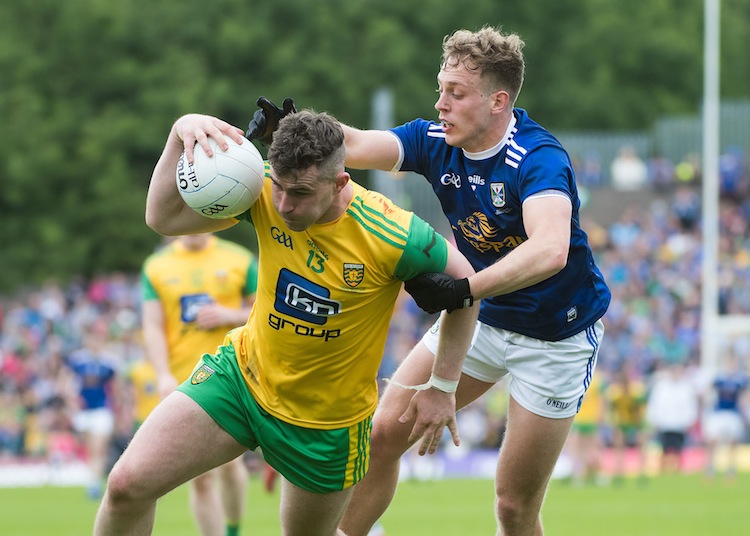 Mickey Graham felt his side deserved their bit of luck against Down on Sunday, stressing it’s usually the top teams who get the big decisions while the likes of his Cavan team tend to be “a bit naive.”

Graham’s Cavan were 10 points down at a stage, only to stage a dramatic comeback and end up winners on a 1-14 to 1-13 scoreline at the Athletic Grounds, with a Martin Reilly penalty a vital constituent of the comeback – a decision described as Down manager Paddy Tally as “controversial.”

Kevin McKernan was penalised for picking the ball off the goalline after Conor Madden, who was off the field at the time, had batted the ball from the hands of Down goalkeeper Rory Burns. Referee Martin McNally awarded the spot kick, which was dispatched by Reilly, having consulted with an umpire.

“Maybe it was time we got the rub of the green,” Graham said yesterday.

Asked whether he felt that Michael Murphy, the Donegal captain, was given enough protection from referee David Coldrick in the first of the semi-finals which Declan Bonner’s side won on a 1-22 to 0-13 scoreline against Armagh on Saturday, the Cavan boss joked: “Maybe we need protection from Michael Murphy ourselves!”

He added: “It always seems the big teams get the big calls. Do they get the easier calls? Possibly, the referees know all these players by first names.

“Maybe the lesser teams aren’t cute enough. If we ask a question we’re basically told to go away. Teams do train to get referees and umpires onside. You see it all the time when you’re watching sport.

“Donegal are a top team. They’re not up there for nothing. It’s not all about football – maybe we’re naïve in Cavan. We need to get a wee bit cuter.”

In a repeat of last year’s final, which Donegal won 1-24 to 2-16, Graham admits his panel have learned from the experience, albeit in vastly different circumstances heading into Sunday’s showpiece in Armagh.

“There’s no buzz,” he said in regards to ongoing issues with Covid-19 and the lack of spectators at inter-county games. “We don’t really see anybody this year whereas last year the place went berserk. This year there’s none of that and it’s just another game. It’s basically just a game of football in the middle of winter.”

Chasing a first provincial crown since 1997, Cavan were relegated from Division Two of the Allianz League following the restart before reeling off consecutive Ulster SFC wins over Monaghan – after extra-time – then Antrim and Down.

Graham has no new injury concerns but admits there’s “a few tired bodies” as they face into their sixth outing in six weeks. They hope to get the go-ahead from their medical team to reintroduce Stephen Murray, Conor Brady, Conor Smith and James Smith to the panel.