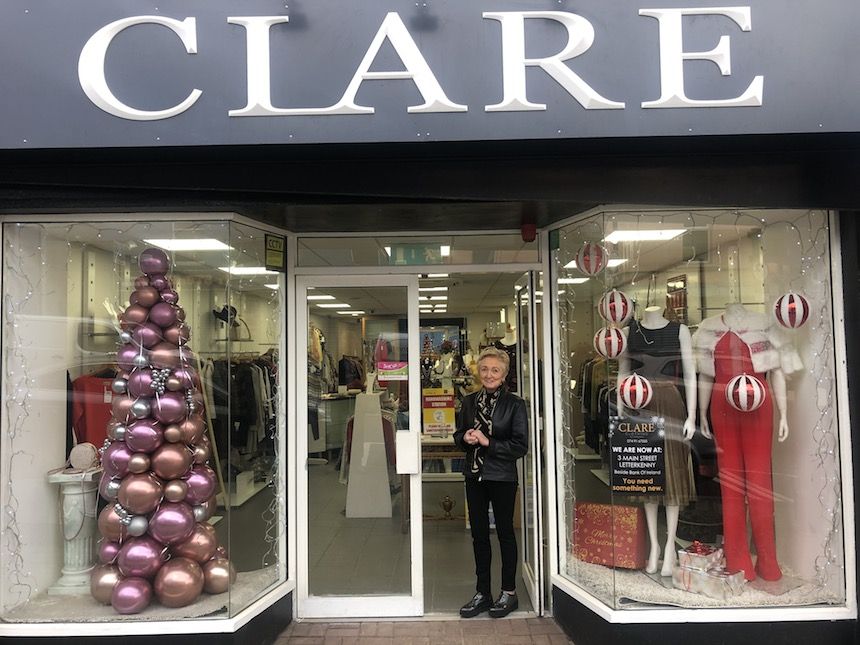 It felt apt that it was December 1 when the town’s retailers began pulling their shutters up again. As Level 5 became Level 3, normality chimed again from the Cathedral’s spire.

Letterkenny Main Street seemed like a lifelike advent calendar. An array of doors, dotted all over, swished open.

Outside, many eager consumers paused momentarily to eye the delights beyond the various thresholds.

It was an historic morning for the popular business opening a new premises after relocating to Main Street.

Her window adorned by the delights of Razzle Dazzle Balloons, Clare has been on the countdown for what seems like an age.

“What else would you do in a pandemic, but move? It’s just great to finally get opened up.”

On the Port Road, Barberhouse 44., a new business, opened in June, but the razor stopped humming in October.

“We were just starting to do what we had wanted to do,” Richard Devenney says. “It was a real kick in the teeth when we had to close.”

The lockdown saw Richard launch a range of new products and merchandise. A booking app ensures a seamless transition from customer to customer; all pre-booked slots are full up for the week. New staff member Brendan Casey is accepting walk-ins and trade has been brisk.

“It’s testing times for everyone, but we have to make sure it’s safe for everyone so we don’t go back the levels again,” Richard says.

“Like everyone, we’ve had to make adjustments to make it safe and we’ve made a lot of upgrades. The year has been full of set-backs, but this is like a light at the end of the tunnel for us.”

Letterkenny Chamber of Commerce President Jimmy Stafford was in town early to sample the feeling.

“You could feel the vibe in the air; a real air of positivity,” Jimmy says.

“It was like somebody coming out of hibernation after weeks of being locked away. There is a pent up demand now.

“This time, people are more aware of the guidelines and measures. The last time, there were so many questions and so much uncertainty.

“Now people are more conscious and retailers are reporting almost 100 per cent compliance.”

Frances Spears, the popular proprietor of Mourne Antiques, had a double cause for celebration as December 1 marked her birthday.

“Getting to open again was just the best birthday present,” Frances says.

“It’s marvellous to see people in the door again. It’s great to have people in to see our new stock.

“I think there’s a real buzz. I’ve been into some other businesses and it’s the exact same. Everyone is just so happy to be reopen again.”

Letterkenny feels busy, but without the bustle. Before dawn, a queue formed to get the first glimpse of Penneys. An orderly system was in place to prevent  the disorderly chaos that might have been expected.

All over, ‘buzz’ felt like the word of the day.

“It has been hectic but there is a super buzz around,” says Joe McFadden of McFadden’s Gift and Home.

“The footfall has been very consistent so far, thank God. We have the kind of shop where people like to browse around. It’s all about the experience, but we’re finding 95 per cent of people are buying.”

A decorative lamppost, Joe says has been so popular with his punters that he wishes he could have sourced more.

He says: “I’m glad to be back and I’m glad to be welcoming back my loyal customers. I can’t wait to welcome the rest of them all back in.”

The Chamber of Commerce held a meeting with An Garda Síochána, whose presence will now be more visible on the town’s retail thoroughfares.

Jimmy Stafford says: “They will have noticeable, visible patrols on foot, on motorbikes and bicycles around the town, just to make sure that people are operating in a safe manner. That will give another air of confidence.”

“We were busy in lockdown, but nothing beats having customers come in the door,” he says.

“It has been busy and steady and there’s real positivity.

“People have seen how tough it has been for businesses and there’s been a lot of good will – even just people calling in the door to give good wishes. People are really buying in to the shop local call now.”

Leonard’s is a tale replicated now by many retailers.

Jimmy Stafford says: “Business had to learn how to re-engineer and one business last week reported their biggest online sales in their history. Other retailers are starting to take off and that will benefit them in years to come.”

At Number 6 Sandwich and Coffee Shop, Shane Doherty is anticipating a god uptake on the Christmas Club sandwich.

“It was slow and dull there for four weeks. There was a real dull feeling.  People are more upbeat today. It feels Christmassy. It’s certainly the first day of Christmas.”