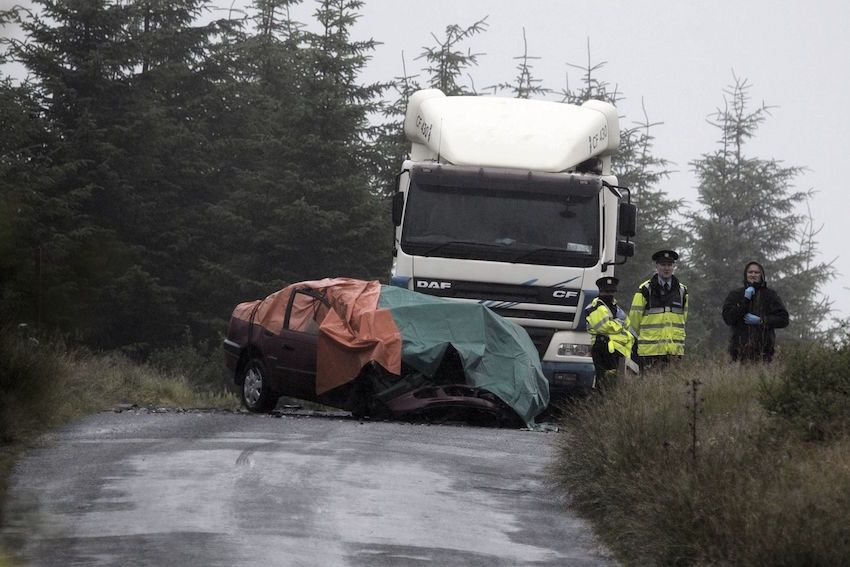 Three killed in head-on collision had only met minutes earlier

Three young people were killed when their cars were involved in a head-on collision after they had been seen chatting to each other just minutes earlier.

Theresa Robinson (20), Kaylem Ó Murachaidh (19) and Steven McCafferty (19) all lost their lives in the accident at Corravady, outside Drumkeen on July 27th, 2016.

The court heard that all three knew each other and this was not an exercise to apportion blame to anyone.

The three people killed were among four who were involved in the two-car collision which took place on a dark country road.

Another man, Sean Ward suffered serious injuries in the crash.

His solicitor, Mr Kieran O’Gorman, told the court that his client of Hilltop, Stranorlar was ill and could not attend the inquests.

Witness Hugh Sweeney told the court that he had been delivering silage bales and he came across the accident in the townland of Stralongford.

He said he saw a man kneeling on the road and recognised him as Sean Ward whom he knew.

When he went to investigate further he saw tow different cars, a maroon coloured Toyota Avensis car and a blue Peugeot 306 car.

He said he saw a man crumpled behind the steering wheel of one car while another person, understood to be Ms Robinson, hanging out of another car.

Earlier a statement from his son Adrian revealed how he had come across all four in his yard.

He knew Sean Ward and Mr Ward had told him that he was going to buy the Peugeot.

He was later telephoned by his father and told there was a bad smash up at Corravaddy.

Garda Michael Kilcoyne was the first officer on the scene and he described the scene of the accident.

The area was cordoned off and local priest Fr Eamonn Kelly had arrived to say prayers and read the last rites.

A doctor from the local NowDoc service had arrived and pronounced all three victims dead while Mr ward was rushed to hospital.

Garda Damien Mulkearns, a PSV Inspector told the court that the fronts of both cars had “massive frontal damage.”

However, the court was told that both cars were in serviceable pre-accident condition when examined.

Garda Sgt Hugh McCann told the court that he examined the scene which was governed by an 80kph speed limit.

However, he said it was impossible to tell what exact speed both cars had been traveling at.

He said that the Avensis was still on the road but that the Peugeot car had been pushed back up to eight metres off the road into the verge.

Solicitor for Stephen McCafferty, Mr Frank Dorrian, said it was impossible to determine what speed either car had been traveling at and that there should be no further conjecture by Sgt McCann as this only led to suspicion.

A lengthy legal debate then ensued between Mr Dorrian, the coroner and solicitor for Mr Ward, Mr Kieran O’Gorman.

Pathologist Dr Katrina Dillon told the court that in her opinion all three people died from multiple injuries as a result of being involved in a road traffic collision.

Coroner Dr McCauley said he agreed and recorded a finding of death by misadventure.

He sympathised with the families of all three victims as did Garda Inspector Siobhan Mollhan on behalf of An Garda Siochana.

“These three people were just having a normal day and probably had plans for the rest of their lives. Circumstances just dictated that a terrible accident would occur and we can only imagine the heartbreak the families feel,” added Dr McCauley.