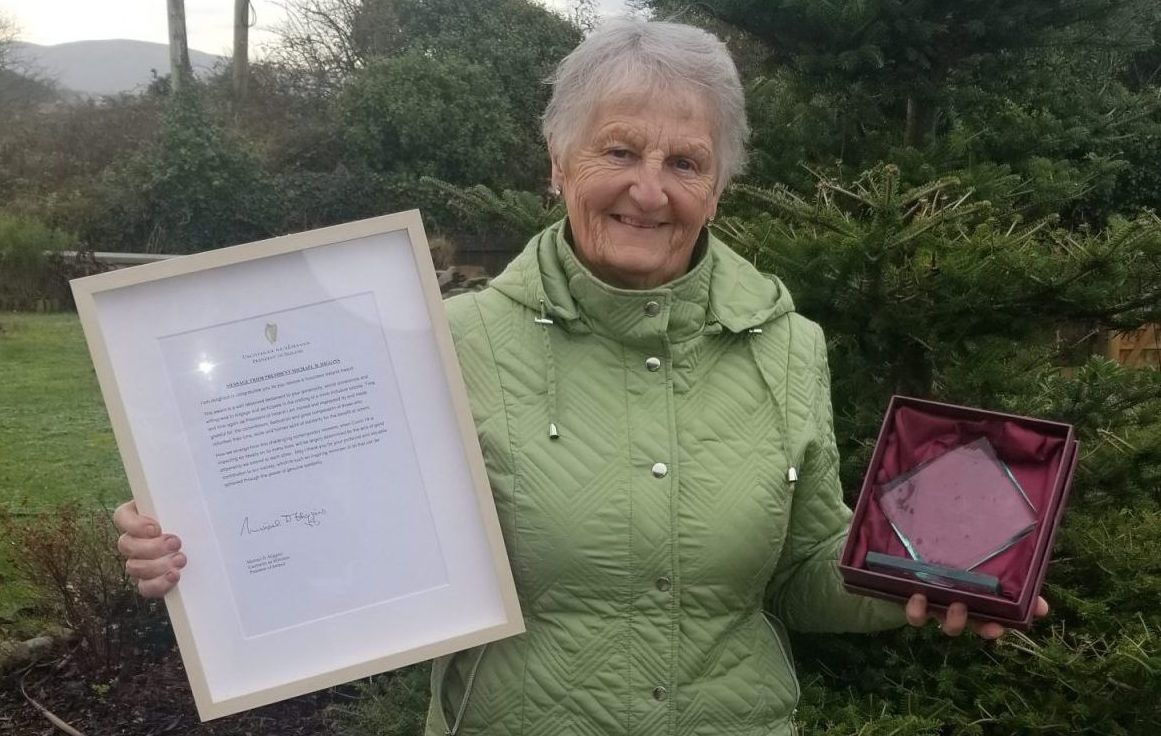 Ballyshannon local Maureen Keenaghan has won a national award for her role as a volunteer.

Maureen was named a winner in the Social Inclusion and Community Support category in the national Volunteer Ireland Awards for her commitment to Age Action Ireland.

Maureen was the driving force behind the development of the Ballyshannon Community Garden.

Maureen worked hard to keep it developing with wheelchair-accessible beds and a sensory garden.

Through her volunteering, the garden has made a big difference to the community providing a quiet haven in the middle of town where people can go for a walk or sit and admire the view and enjoy the flowers, vegetables and allotments.

According Donegal Volunteer Centre Manager to John Curran “We are lucky to have volunteers like Maureen in Donegal. Volunteers are often unseen but the contribution they make to Irish society is immense. These awards give us a chance to say thank you and celebrate the difference volunteers make every day.”

Arthur and Deborah Carr were named Christine Buckley Volunteer of the Year for their outstanding commitment to supporting those in crisis in Galway.

Joe O’Brien TD, Minister of State for Community Development and Charities, said “It gives me great pleasure to congratulate all the winners of the Volunteer Ireland 2020 Awards, which are supported by my Department. After what has been a very challenging year for us all, it is all the more important to thank those volunteers who have gone the extra mile to support the most vulnerable in our communities. In addition to the winners, I would also like to thank Volunteer Ireland for their work to support and champion volunteering around the country.”

About the Volunteer Ireland Awards

The Volunteer Ireland Awards are now in their thirteenth year and aim to shine a light on the ordinary people doing extraordinary things in our communities every day. Winners were announced in thirteen categories with usually one volunteer – in this case two – being named Christine Buckley Volunteer of the Year. Our overall award is named after dedicated campaigner and previous awardee, Christine Buckley.