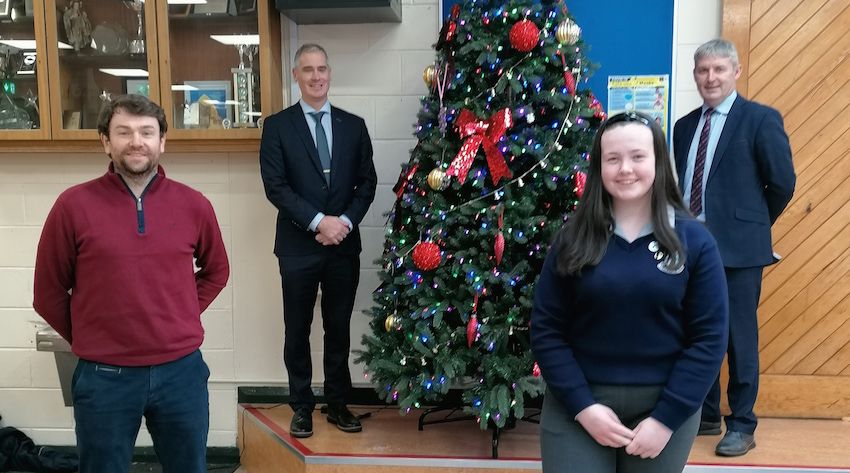 Tara Toye, a fifth year student in Deele College has been announced as the winner of this year’s Soapbox competition, organised by the Donegal Library.

The annual competition, which sees students from across the country debate in a public forum was changed this year in light of the Covid regulations, which meant that students had to video their speeches and send them to the library electronically.

Despite the new regulations, there was great interest in the competition and there were scenes of celebration in Deele College, when Tara Toye was announced as the winner of the U-18 category.

Tara’s speech on why ‘we all want to go back to pre-covid times,’ caught the attention of the judges with her fresh and original take on the debate, with her primary focus on the need for socialising among family and friends.

Tara, who is a member of the Donegal Youth Council is no stranger to speaking in front of audiences and her confidence shone through in the video, where she gave a clear and focussed argument, which saw off the intense competition from students across the county.

First prize in the county competition is an Ipad Mini and Tara will now go on to compete in the national competition where there is €1000 up for grabs.

School principal, Mr Joe Boyle says that he is delighted that Tara has been recognised for her public speaking abilities.

“Tara is an exceptional student who has already done us proud this year by gaining a seat on the Donegal Youth Council. To win a county-wide competition in public speaking shows the ability she has in speaking publicly and we hope that she goes on to do well in the national competition.

“I think that we are seeing the positive effects of the new Junior Cycle, which places a focus on public speaking and oral presentations, with students who are comfortable performing in front of audiences. I’d like to congratulate Tara on her win and she continues to be a great ambassador for the school.”