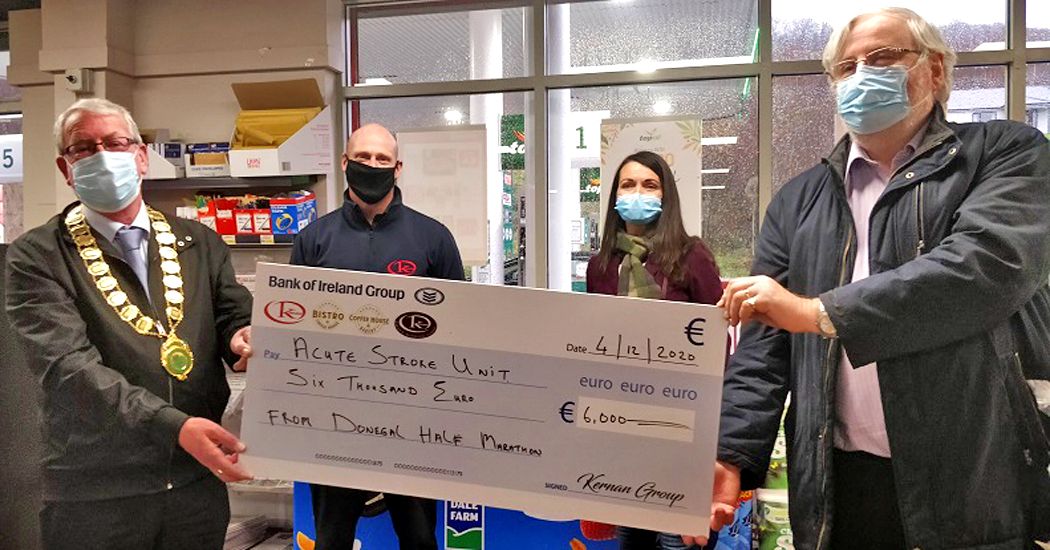 The 2020 Virtual Donegal Half Marathon has raised €6,000 to buy equipment for the new Acute Stroke Unit at Letterkenny University Hospital.

The success of the event has also been boosted by main sponsors, the Kernan Retail Group, covering the full cost of the purchase of a life-saving defibrillator at Kernan’s, Tullygay, through its partnership with Community Recycling Initiative.

Speaking at the cheque presentation, Donegal Half Marathon Ambassador, Danny McDaid, said that while staging a virtual event for the first time this year was challenging, the efforts of the organising committee proved worthwhile.

“We teamed up again this year with Kernan’s as the main sponsors and it’s proven to be a great partnership. We’re delighted to be presenting a cheque to Professor Ken Mulpeter for €6,000 on behalf of the community to help out with his Acute Stroke Unit.

“We’re also delighted to have Mary Larkin with us today. The late Dessie Larkin was one of the instigators of the Donegal Half Marathon and it was Mary who got Ken Mulpeter on board with his charity,” Danny added. 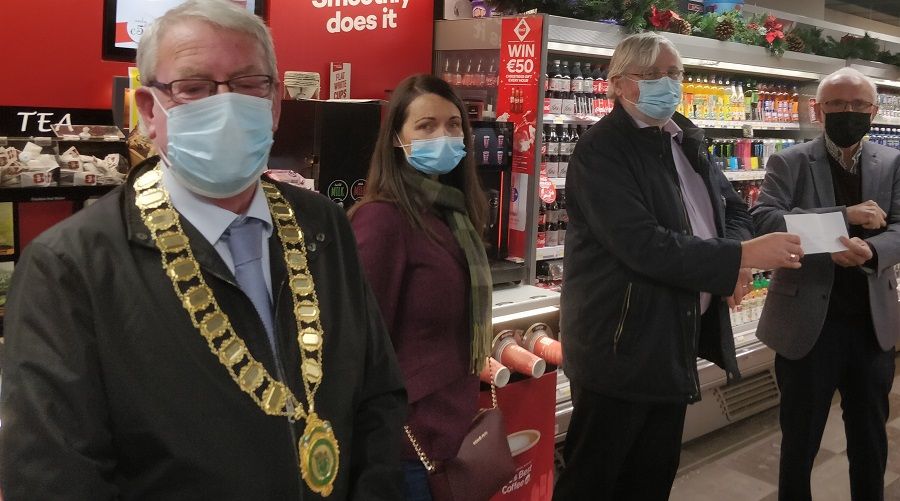 Donegal Half Marathon Ambassador, Danny McDaid, presenting Professor Ken Mulpeter with a cheque for €6,000 euro – the proceeds from the 2020 Virtual Donegal Half Marathon. Also included is Mayor of the Letterkenny and Milford District, Cllr Donal Coyle and Mary Larkin.

Speaking on behalf of the Larkin family, Mary Larkin said: “We, as a family, were privileged to be able to choose a charity we felt would benefit from the Donegal Half Marathon. We thought a lot about it because there’s no such thing as a bad charity. But we, as a family felt that given our own situation, the new Acute Stroke Unit at Letterkenny University Hospital under the direction of Professor Mulpeter would be a very worthy cause. Personally, I am delighted to see that move forward and I think it’s a wonderful thing to have on our doorstep.”

Thanking the Donegal Half Marathon Committee for their cheque, Professor Mulpeter said he hoped the new Acute Stroke Unit will be open over the coming weeks.

“We would hope with the opening of the new Acute Stroke Unit, we will save about twelve lives a year within Letterkenny. We’ve been behind the curve a bit in getting a stroke unit and we’ll be opening it within the next few weeks, I hope, subject to the problems with Covid,” he commented.

“I’m extremely grateful for the generosity of the Donegal Half Marathon Committee in helping us purchase some equipment for the Acute Stroke Unit. I think the future, hopefully, will be much better with strokes in Letterkenny and Donegal,” Professor Mulpeter added. 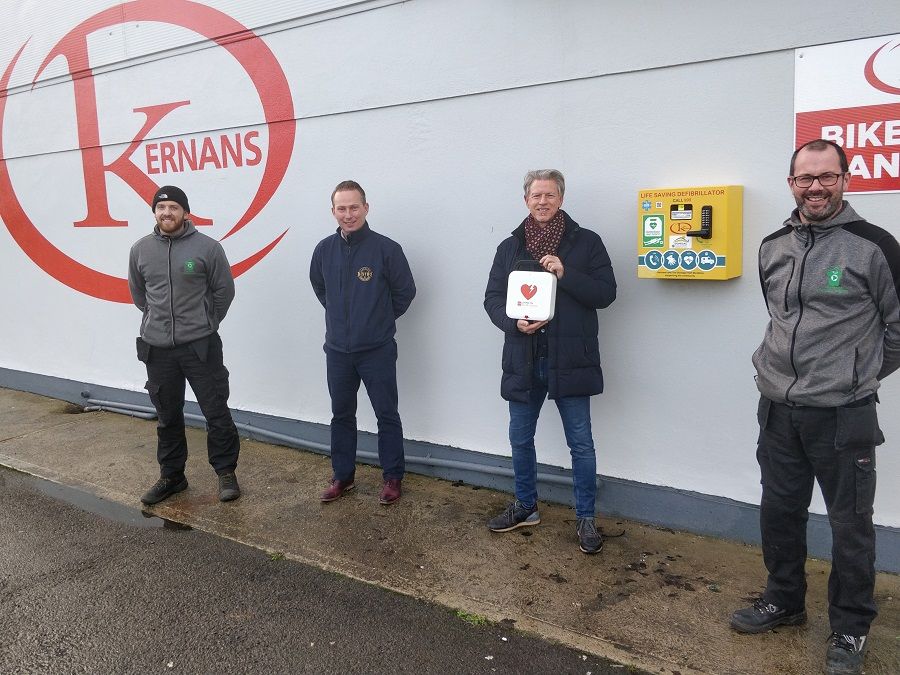 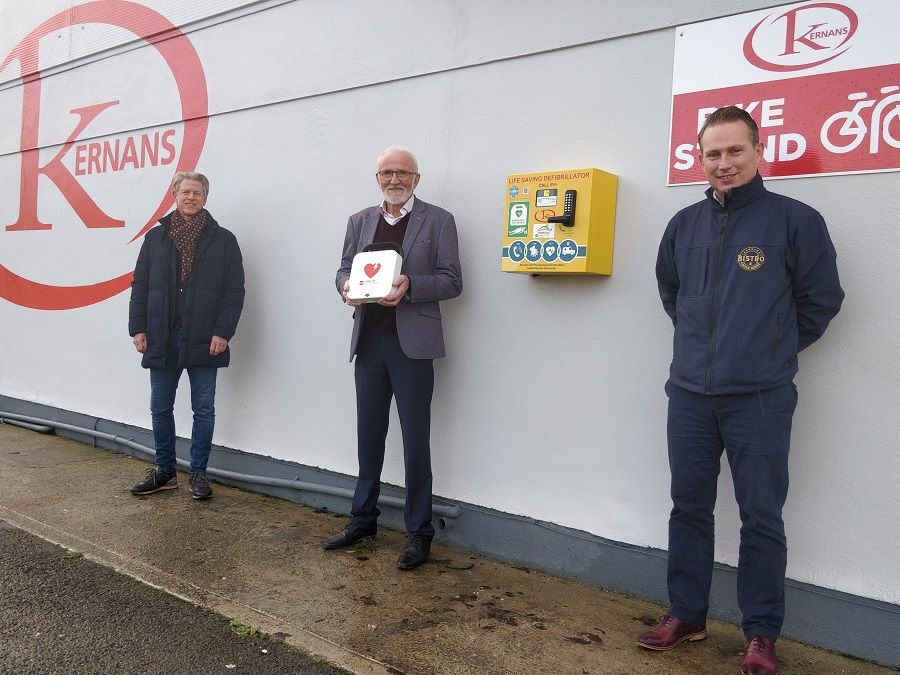 In his address, Mayor of the Letterkenny and Milford District, Cllr Donal Coyle, said he was delighted to be representing the council and the people of Letterkenny.

“Donegal County Council has been associated with the Donegal Marathon and Half Marathon since their foundation. One of my former colleagues, Dessie Larkin, was very much to the fore from the very beginning. What today shows is the resilience, the creative talent and the adaptability of people,” Cllr Coyle commented.

“Who would have thought there would have been a half marathon done the way it was done this year, because of the conditions and the situation we found ourselves in. A lot of credit must go to the committee because it was certainly different for them this year. Instead of them being able to hand out t-shirts and medals at the end of a race, all that had to be packed and posted. So, there was a lot of work involved.

“The way the virtual half marathon reached out to the diaspora right across the globe was great. I think that’s an aspect of the half marathon that could be considered again next year. It’s great to see two charities benefitting from the event.

“I’d be hoping next year to take part in the marathon myself because we a defib on the route I would feel safe doing it,” Cllr Coyle quipped. 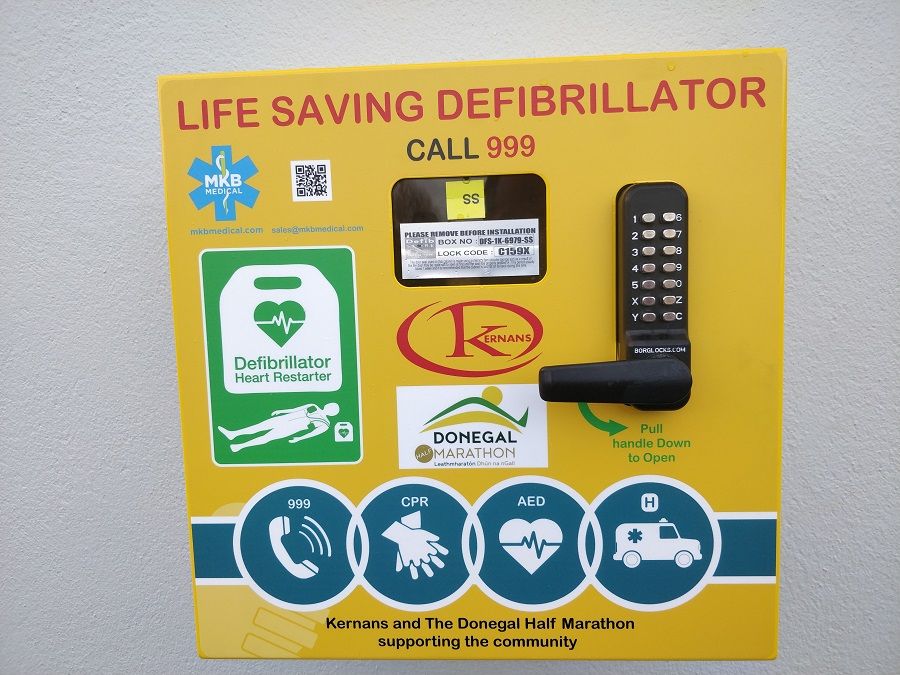 The life-saving defibrillator which has been installed at Kernan’s, Tullygay. The total cost of the defibrillator was covered by the Kernan Retail Group, the main sponsors of the 2020 Virtual Donegal Half Marathon.

Anthony Kernan, owner of the Kernan Retail Group, said his company was glad to be associated with the 2020 Donegal Half Marathon.

“This is our second year to be the main sponsor of the Donegal Half Marathon and because of the pandemic, it was held virtually this year. It was great to be involved with an event which saw people taking part from all over the world. It raised a lot of money for good causes,” he commented.

“We try our best to get involved in the communities and we are happy to have funded the new defib here at our Tullygay store. It’s a great thing to have, just in case. None of us think we’re going to need it, obviously, but it’s important to have, as has proved elsewhere.

“We have created a relationship with the Donegal Half Marathon Committee – they’re all good guys and all seem to want to do it for the right reasons. It’s a relationship we are certainly interested in maintaining for the next number of years. We’ve all seen that it’s a community-based project and that’s what we are about. We are community-based in our businesses and we like to do our bit to give back. Through their participation in this year’s event, people were getting a little bit of home no matter where they were. It was also their way of giving back.”

The defibrillator was funded by proceeds from Kernan’s Community Recycling Initiative through which unwanted clothes are turned into cash. Over the last three years, the Kernan’s Retail Group has built up a fantastic partnership with Gareth Gordan and his team at Community Recycling Initiative which is a not-for-profit textile recycling company. It has a clothes bank at every Kernan’s location in Donegal and has over 170 across Ireland.

Since joining forces in 2017, Kernan’s and Community Recycling Initiative have raised around €10,000 for worthy local causes. Kernan’s would like to thank electrician, Robert Johnson, for installing the defibrillator free of charge.