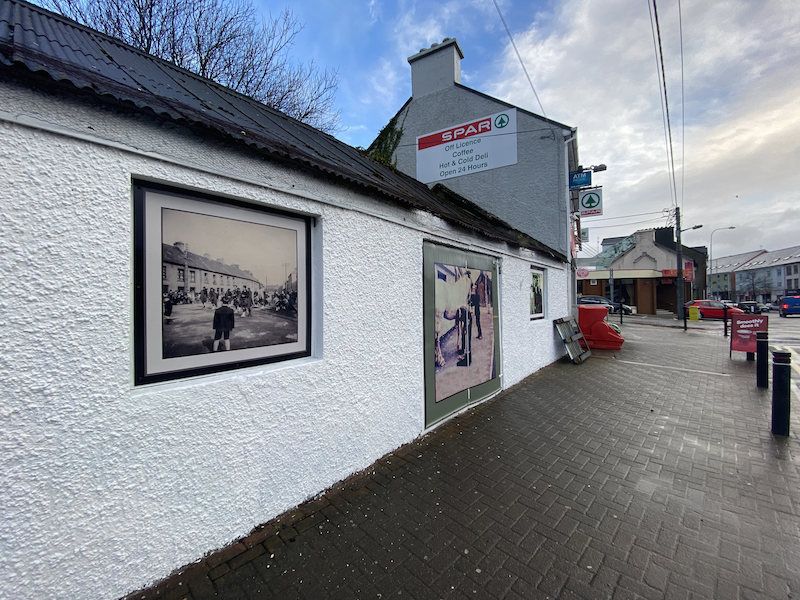 From the candy store on the corner
to the chapel on the hill.
Two young lovers are longing to go there.
And they say some day they will.

This is the song that is running through my head after completing a small photographic exhibition at the foot of the town this week on the wall of the Old Forge.

Sung by my father after a couple of drinks recalling his days working for the ESB when it was located on the Back Road (where MH Associates are now located), and meeting my mother Mary Ellen who worked in the shop on the corner and after a few years got married in St. Eunans Cathedral, the chapel on the hill.

He didn’t know all the verses, maybe just the opening one which he would repeat as his emotions would change from joy and love to sorrow and anger. He would say he and my late mother were singing the song when Dickie Rock was in nappies long before he made it a hit in Ireland. 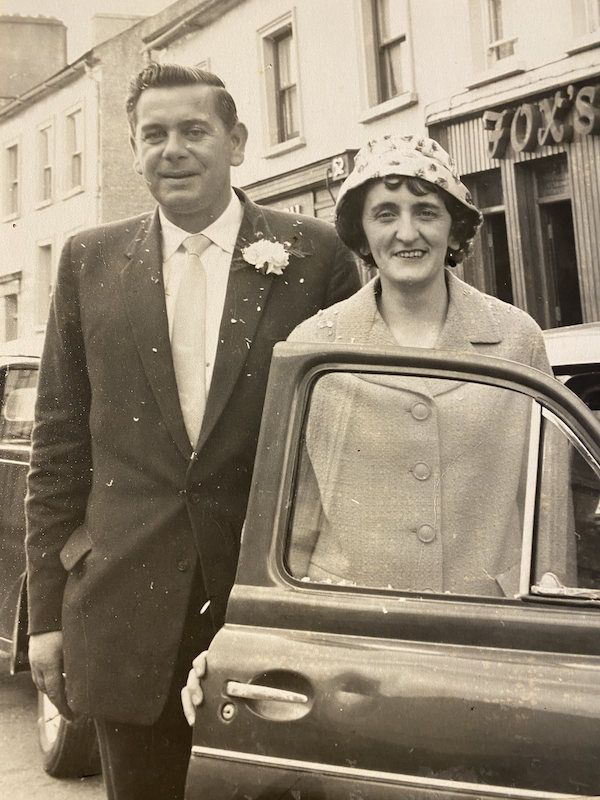 Fred and Mary Ellen Mc Daid on their wedding day

These memories of him and my mother are to the fore this week on a small photographic exhibition of just three photos which I was invited to make for the wall of the Forge at this same corner many years after where the Back Road and Ballymacool Meet. Two windows and a doorway now have memories from the past at this corner with old family snaps from the area taken in the last century.

It was Cathal Curran from the Kernan’s Group’s idea to do this after he recently spotted an old photo of George Gallagher the blacksmith affectionally known at ‘the fella’ shoeing a horse in the street outside his forge at the foot of the town. 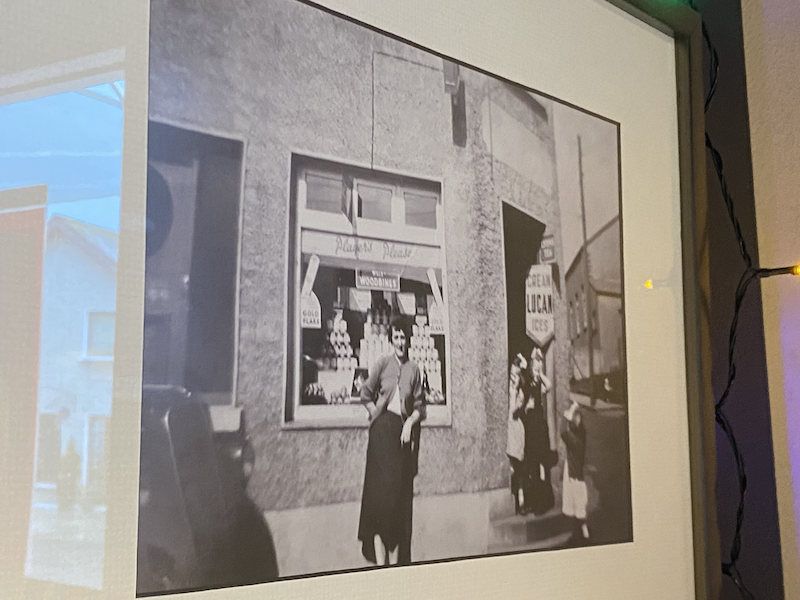 Mary Ellen McDaid (Nee Coyle)pictured in the Coyle shop at the corner at the foot of the Town in Letterkenny. In the 1950’s

The photo was taken in the 1970s just before the Tin Thai was built on the other side of that corner. That photo takes up the full of the door on the old forge now, we are unsure who the man holding the horse is but hopefully, someone will recognise him. The other two old family photos which take up space on the old windows either side of the doorway are images of the foot of the town even before the Second World War.

George Gallagher is in the memory of many over the years as he worked at the Old Forge at the foot of the town. As a child, I was allowed to sit on the corner of the step of the shop door and watch George from a safe distance when the oldest mode of transport, the trusty horse would arrive to get shod. 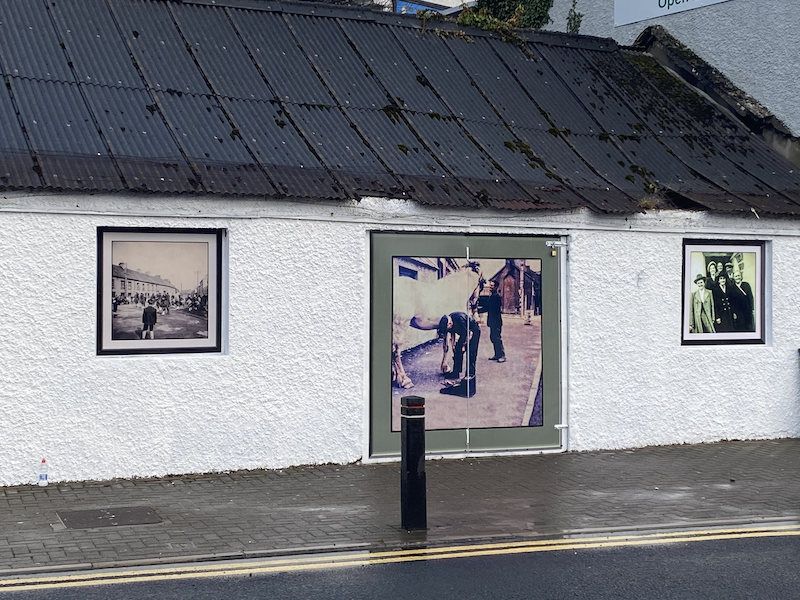 George Gallagher back in the doorways of his old forge in this photographic exhibition of days gone past the foot of the town in Letterkenny. Photo Brian McDaid.

The imagination of many a young child went on a journey of its own as they watched horses arriving at the Forge and were tied to the wall, (the hook for the rope is still there to this day). It is said that the fella didn’t put much pass at onlookers unless they got too close to the horse and put themselves in danger.

It is said that one day a passer by stopped his car to watch The fella shoeing a horse. After a while, the visitor moved a bit closer and the fella was about to tell him to step back when the visitor broke into conversation.

Talking low, talking slow and not saying too much the visitor said “I see we have a common interest.” “What’s that now?” the fella replied never lifting his head as he worked away.
“The love of horses, my friend” the visitor replied. The fella knew the voice but didn’t know how he knew it. Looking up he realised it was the film star John Wayne. Known as The Duke, he was in Donegal as a guest to Henry Mc Elhinney at Glenveigh Castle. It a story that the fella enjoyed telling many’s the visitor to the Forge over the years. 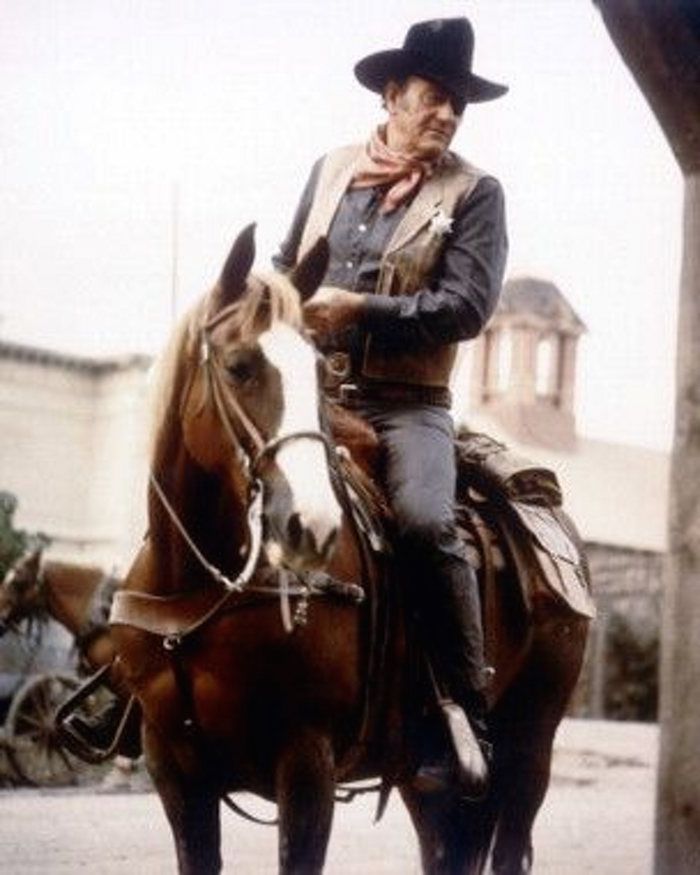 It is said that the fella and the Duke stood at the foot of the Back Road outside the Forge chatting about horses for a while before the film star stepped into his car and the next time George saw the Duke was on the silver screen of the La Scala Cinema on the Port Road heading off into the west on horseback.

From the tallest of stories from the foot of the town to the smallest that of the picture in the window of the Forge to a photo of a small boy standing at the foot of the town watching a pipe band swinging around at Roulston’s corner before it headed back up the Main Street.

The other window has a picture of the beginnings of the shop which is now Kernan’s Spar and how it started as a rented room in a thatched cottage belonging to Kitty Herron, a widow who lived on the corner with her children.

Bridgit Coyle, my granny, rented the room to open her shop. She is pictured in the right of the picture with her extended family at the shop door, with her two sisters Ellen Murray and Sizzie Mullen pictured with her daughter Bida, her niece Lizzie Mullen and her brother-in-law Neal Mullen from Kirkstown. Lucan Ice Cream was the popular treat back in those days. 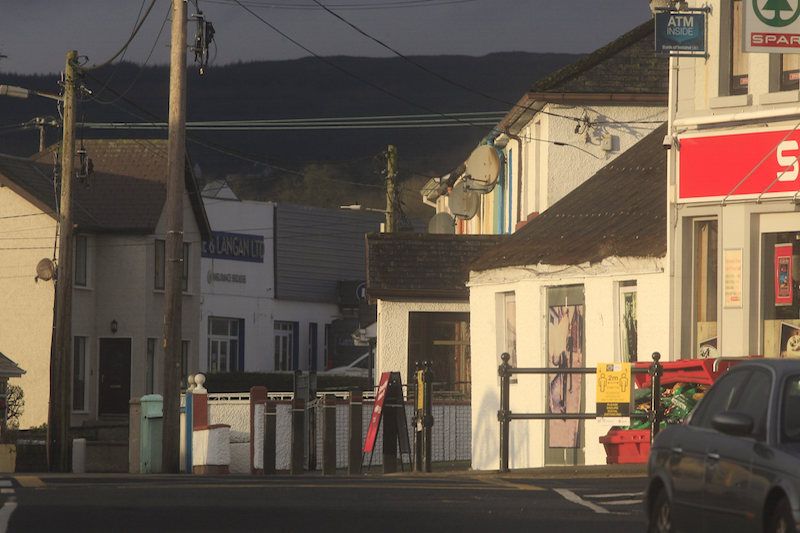 In those days it was Brown’s Foundry and all their workers who were regulars in the old shop which was located opposite when the car park and the skittle alley is now, Browne’s foundry was replaced by Bonner’s which became Bonnar Engineering. The old phone number for Brown’s foundry in those years was ‘Letterkenny 56’ that number is still with Bonnar’s who took over the foundry and moved to their new premises on the Link Road still have the same phone number now 07491222 —56. 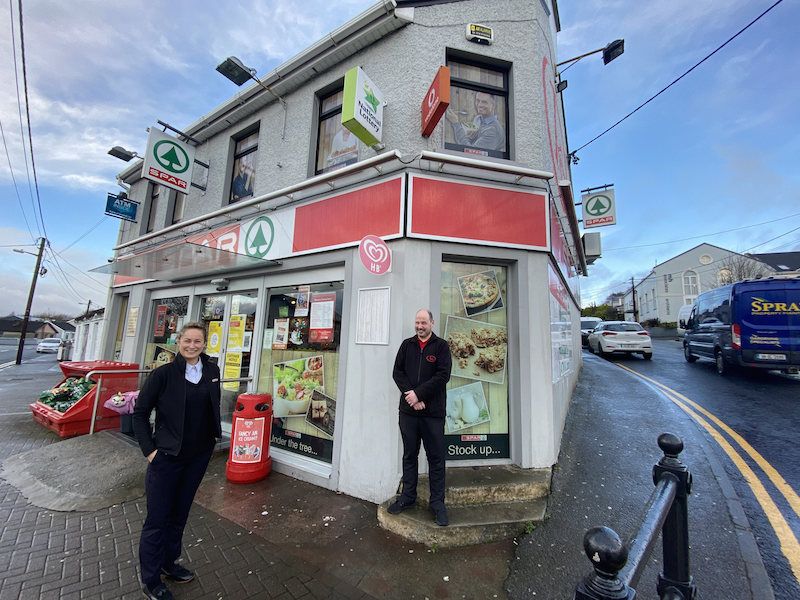 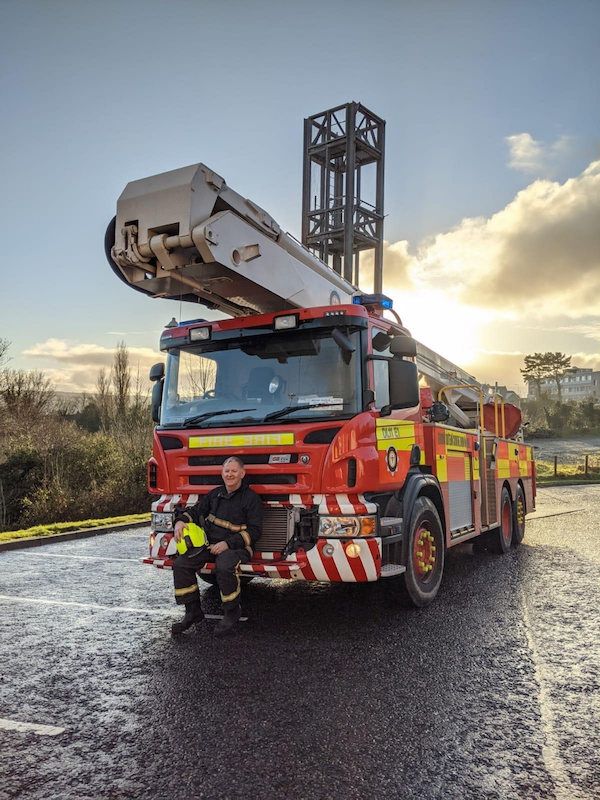 Paddy Mc Namee who stepped down as Firefighter Driver with the Letterkenny Fire Service this week after servicing over 20 years answering the call in Letterkenny.

One of our unsung Heroes with the Letterkenny Fire Brigade, Paddy McNamee ( Paddy Mac) has called it a day attending his last fire call this week after over 20 years on call. Paddy was a driver firefighter with the service in one of Co Donegal’s busiest fire stations.

Over the years this cool, level-headed Letterkenny man has taken all the pressure of turning out to calls and negotiated his way with a fire engine and fire crew through the heavy traffic in Letterkenny to get to calls in and around the Letterkenny turn out area.

A quiet and courteous crew member, Paddy has let his safe driving do the talking over the years at all hours of the night or day. He made the art of keeping his head in high-pressure emergency call-outs look easy, a quality that will be missed.

Enjoy your retirement Paddy after a job behind the steering wheel of the Letterkenny Fire Engine extremely well done.