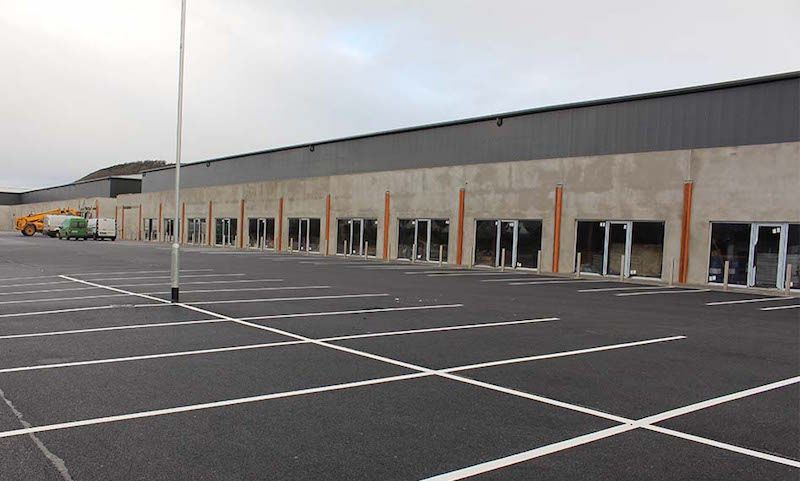 Huge boost for Milford with new retail and business park

The Milford area is set for a major jobs boost in the New Year with the completion of a new multi-million euro retail and business park development.

The new ‘Q North Retail and Business Park’ is located next to Lidl and after extensive works it is now nearing completion as car-parking and outdoor lighting are being installed.

The Tirconail Tribune reports that this is the first major commercial development in Milford in ten years and it could not come at a more opportune time.

The company driving the development is Empara Construction who said they first identified the site as having substantial commercial and retail value as far back as 2006.

It is understood that negotiations with a leading national brand name as the anchor tenant is now at an advanced stage of being agreed. And with a number of new tenants lined up to move in, it is expected the first outlet will open its doors to the public in March.

The Empara spokesperson added that they are aiming to make the development attractive to businesses by keeping costs low and he outlined a rental price at €175 per week.

Q North also has over 200 car parking spaces at the site, as well as the 100 existing spaces available at Lidl.

The spokesman added that between the Lidl Complex and the new Q North development the total investment in the site has been €5.5million.

The location has been a hive of activity over the summer as teams of workers were engaged in bringing the project to fruition before the end of this year.

This is a major development that has been a massive investment of money and a spokesperson for Empara Construction Ltd, says the retail section of the park is already close to 70% capacity and includes a major national retail brand.

While it is estimated that the retail alone could generate up to 90 much needed jobs for the area, there is also huge potential for new business and start-ups with a large 4,500sp ft area of office space yet to be filled.

The developer said this area can be subdivided into offices of various sizes as per the tenant’s requirements.

Speaking to the Tribune this week, an Empara Construction spokesperson said the success of the Lidl development is what has driven them on to complete Q North and it can now become a major retail hub for the area.

They stated: “We identified this site in 2006 as a prime location for a retail and commercial hub for the Milford/ Rosguill, Rathmullan and the Fanad Peninsula. With this in mind, Q North Business and Retail Park came to fruition.

“This theory was proven by our anchor tenant Lidl moving onto the site in 2010. Lidl Milford is now one of the top trading stores in Donegal. With affordable rent to give local businesses the opportunity to flourish within the retail and business park we are already looking at 70% capacity.

“As of yet, we are not at liberty to release client’s names as they are in the contract stage. To complete Q North we are looking for a diverse range of tenants to make the project more attractive as a one-stop shop for everyone.

“Therefore, we are interested to hear from hairdressers/beauticians, pharmacies, clothes retailers etc. We also have 4,500sq ft of office space for anyone who is looking to start or expand their business. Multiple types of retailers will be considered. The development is predicted to have substantial employment potential when fully operational.”

For more information you can email milfordretail@yahoo.com