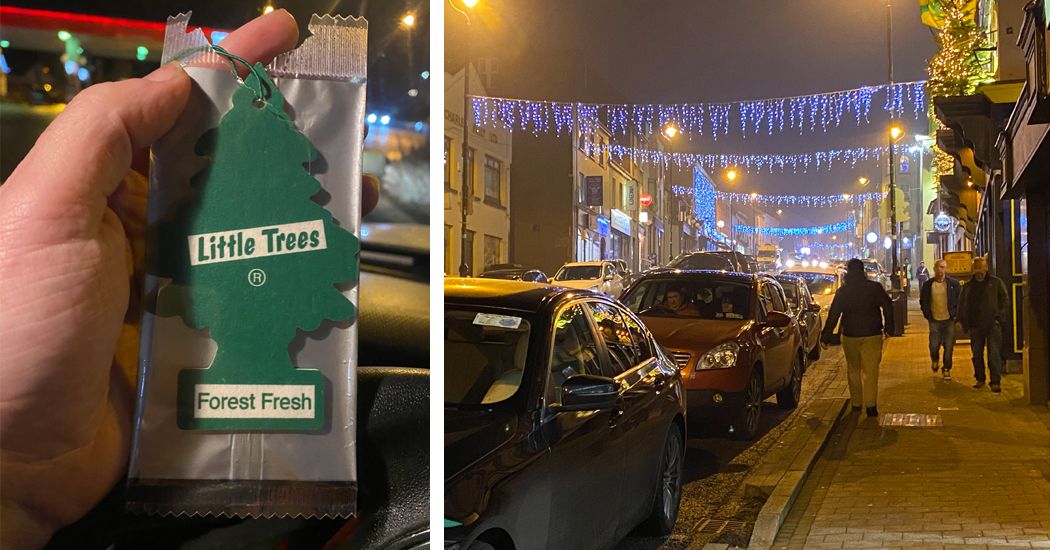 Motoring with Brian McDaid: The Story in the Tree

Motoring columnist Brian McDaid takes a trip down memory lane, sharing stories prompted by the familiar smell of a little tree… he also shares a heartfelt poem by a homesick Letterkenny man at Christmas.

I bought a tree for Christmas. Well it wasn’t really to celebrate the festive season.

I was filling up, with the good stuff, for a change, the stuff that has less of a carbon footprint, well that’s what it said on the nozzle.

It was 7c dearer than the cheap stuff which was €117.85 per litre, but sure it was Christmas, what the hell, in this moment of thought of what or who this good stuff would be good for, I ended up overflowing the fuel tank out on to the street and on to my shoes.

As I stood in the social distance line to pay. I knew things were bad when costumer two metres a head of me put his hand up in front of his mask to see if it was him that was reeking of diesel.

Diesel smells of diesel no matter if it’s the cheap stuff or the carbon neutral footprint stuff.

Getting a cappuccino from the vending machine, I spotted one of them Little Trees Forest Fresh air fresheners.It had been years since I bought one of these.

I don’t fill up with fuel very often, but when I do, I like to take a wee spin somewhere when the needle on the fuel gauge is up past the full mark. Fuel seems to me to go further and the hand takes longer to makes it way down from

Christmas Eve is the one of the times that I fill the tank up, this year with possibly more lockdown on the way, this was done on Sunday evening past.

I nearly forgot the proper way to open this Little Tree car air freshener, just opened to the top in a V shape and let the top few branches stick out.

The heater is on and that wee magic tree is not only doing a great job of covering the smell of diesel that overflowed onto my shoes but reminding me of cars and the smells they had years ago. Ashtrays and water leaks gave two distinctive smells especially on winter nights like this.

The heater was on and blowing hot air up to clear a freezing window, it was also carrying the smell of the little magic tree to a distant past.

Searching through Spotify I find the perfect music partner for the journey, the late Charlie Pride, who recently passed away was the king of country music in my memories of the past. Memories of cars pulling in for petrol to Hegarty’s with the sound of the old 8-track playing the unforgettable songs like the ‘Crystal Chandelier’, ‘Does My Ring Hurt Your Finger’ and ‘Kiss an Angel Good Mornin’ have me back in the 70s.

It takes me back to memories of my efforts to record music into a cassette recorder which included the background sound of petrol pumps clicking away as the old gallons measurements registered on the old rattle pumps.

‘Just Between You and Me’ was my all time favourite song from that great American country singer. I can remember belting out an out of tune version of it to that old recording I made of it many years ago siting in a hut in the petrol pumps.

And then when I was old enough to drive (legally) and get insured in my father’s car, a proper version of Charlie Pride’s greatest hits was purchased and was pumped through to two speakers fitted on the shelf of at the rear window of our old Hillman Avenger.

Growing up in Letterkenny the more popular music by people of my age was pop and rock and that kind of stuff but I always knew from a very age that I was a country music fan at heart. For some reason the sound and smell on a winter’s night reminded me of car journeys to dances in the Milford Inn on Sunday night heading down the shortcut through Ballyare watching the road ahead through the reflection from the old phone lines stringed along the twisty road showing up the headlights of oncoming cars.

A busy Main St. in the run up to Christmas. Photo Brian McDaid.

Memories away from home.

On the run into Christmas with Ireland going back to lockdown on Christmas Eve, we look at the words of a homesick Letterkenny man away from his home town for Christmas. It’s a poem we received this week from a local Letterkenny born woman Rosaleen McCool who moved to neighbouring Stranorlar when she got married many years ago. Rosaleen who was Molloy from Rosemount in Letterkenny has always kept in touch with her hometown.

The trees at the top of the back road and the way the wind would flow through them recalled in the poem from many years ago. Photo Brian McDaid.

The Bells of St’ Eunan’s rising out around the countryside on Christmas Eve recall in Willie Curran’s Poem.

The poem was written by W.A. Curran who was originally from St. Eunans Tce on the Back Rd. in Letterkenny. He was a brother of the late Fr. Tommy Curran who sadly passed away in January at the start of this year.

It is believed that the poem was penned by Willie Curran when he was first stationed as a young Garda in the west of Ireland in a small village somewhere in Co. Mayo. He talks about heading to Midnight Mass there and dreams of how he remembered what it was like when he was a young boy growing up with Letterkenny and the build up to Christmas. He recalls how his hometown came to life at Christmas and the journey that people made from all parts of the town some of which are named in the poem as the people make their way to midnight mass at St. Eunan’s Cathedral Mass.

Willie talks about the sound of both the choir and the bells of St Eunan’s as the night air carries the sounds into a Christmas night. The trees in the convent ground which just would just be beside his home on the Back Road, and the sound of wind blowing through them.

Memories of the choir on Christmas Eve recalled by Willie Curran in his poem on Letterkenny. Photo Brian McDaid.

Many years on they are still a landmark in Letterkenny. Kelly’s Mills are mentioned as is Rockhill. Rosaleen has kept a copy of the poem for years which was well known by Letterkenny folk. She has given friends many copies of the poem over the years but now is afraid that this beautiful poem might be forgotten.

The lights shine out from the little church, amid the sheltering trees,
And the candles glow in the scattered homes along the village street,
As cheery voices greetings call to others as they pass;
For this is the night ‘ere Christmas Day – they’re going to Midnight Mass.

And now the warning bell peaks forth across the country still,
Across the fields, and woods, and lakes, from the chapel on the hill;
And the people climb the winding road, with greetings as they pass;
From their homes in the hills tonight they’re going to Midnight Mass.

And as each peal is carried far in the breezes of the night
I wander ‘gain down memory Lane,
As longing thoughts take flight,
Across the miles that lie between, as those friendly people pass;
To a far off home of boyhood days,
Where they’re going to midnight mass.

And I see the town with friendly crowds,
It’s shops so cheery bright,
I hear once more the traffic’s roar,
I see those glittering lights
And the kids with faces pressed against, each shops inviting glass.
For some are staying up late tonight- they’re going to Midnight Mass.

And the moon shines down across the fields, those green fields by the Mill.
Across the slopes of Sallaghagrane to the shadows of Rockhill;
And the people cross the Oldtown Bridge, as the river gurgles past,
And the people hurry in the Port – they’re going to Midnight Mass.

I see them coming down Glencar;
They climb the Market Square;
I hear the breeze in the convent trees;- Oh! Wish that I were there!
And now back through the years again the mighty choir sings ‘Adeste Fideles’ and hark the joybells ring!

And send their glorious carillon from lofty belfry high-
The peals are thund’rung through the hills to softly, sweetly, die.
As old familiar faces in reminiscence flit past,
By every hollowed spot of old – they’re going to Midnight Mass.

But I awake from my reverie , see the lonely countryside,
As I hear the simple warning bell, the simple choir beside;
But I know my step is lighter, with each cottage that I pass,
For my heart is climbing the old Back Road, and I’m going to Midnight Mass.

The old seat in St. Eunan’s – memories of going to mass as a child. Photo Brian McDaid.

Going to mass and “Climbing the Market Square’ described by Willie Curran in His poem from many years ago.Photo Brian McDaid.

Motoring with Brian McDaid: The Story in the Tree was last modified: December 23rd, 2020 by Brian McDaid