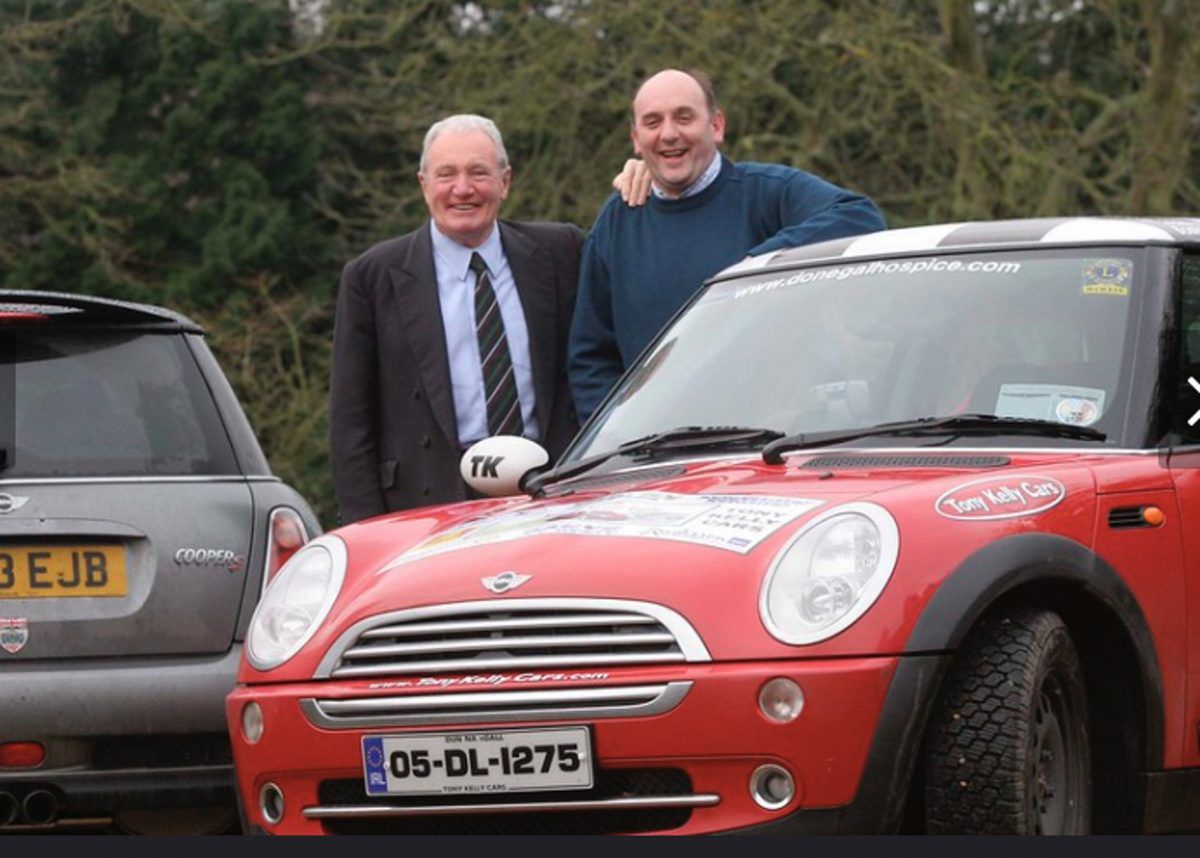 I’m embarrassed to say that for a moment I couldn’t find the grave of a friend over Christmas.

There were a few in the graveyard that day but only myself knew that I was lost.

It will be 17 years on the 23rd of January 2004 since my friend passed away. Our graveyards have filled up so much in them years, the landmarks that you are familiar with near new graves are ever changing. As children we went in the old gate or step-through in the wall with my grandfather to visit his wife Bridgid’s grave.

With my father we went through the turnstile in what we call mammy’s graveyard to visit my Mother, Mary Ellen’s grave in what was the new graveyard then.

And in my generation we drive into the graveyard and park beside the holy well which was along the wall at the bottom in our day.

It was a call from a fellow friend Tony Coyle, I knew before I pressed the answer button that the news wasn’t going to be good. I was sitting in the reception of Loews (now called Fairmount Hotel) in Monte Carlo. It was my 40th birthday and Christmas present all in one. A few days before that I was standing in the Donegal Hospice saying farewell to a friend and workmate. As well as being a workmate and friend, Eamon Harvey was also one of my rallying heroes, big into his fitness and health, a tee totaler and non smoker. He was the last person I imagined I would be saying goodbye so soon. 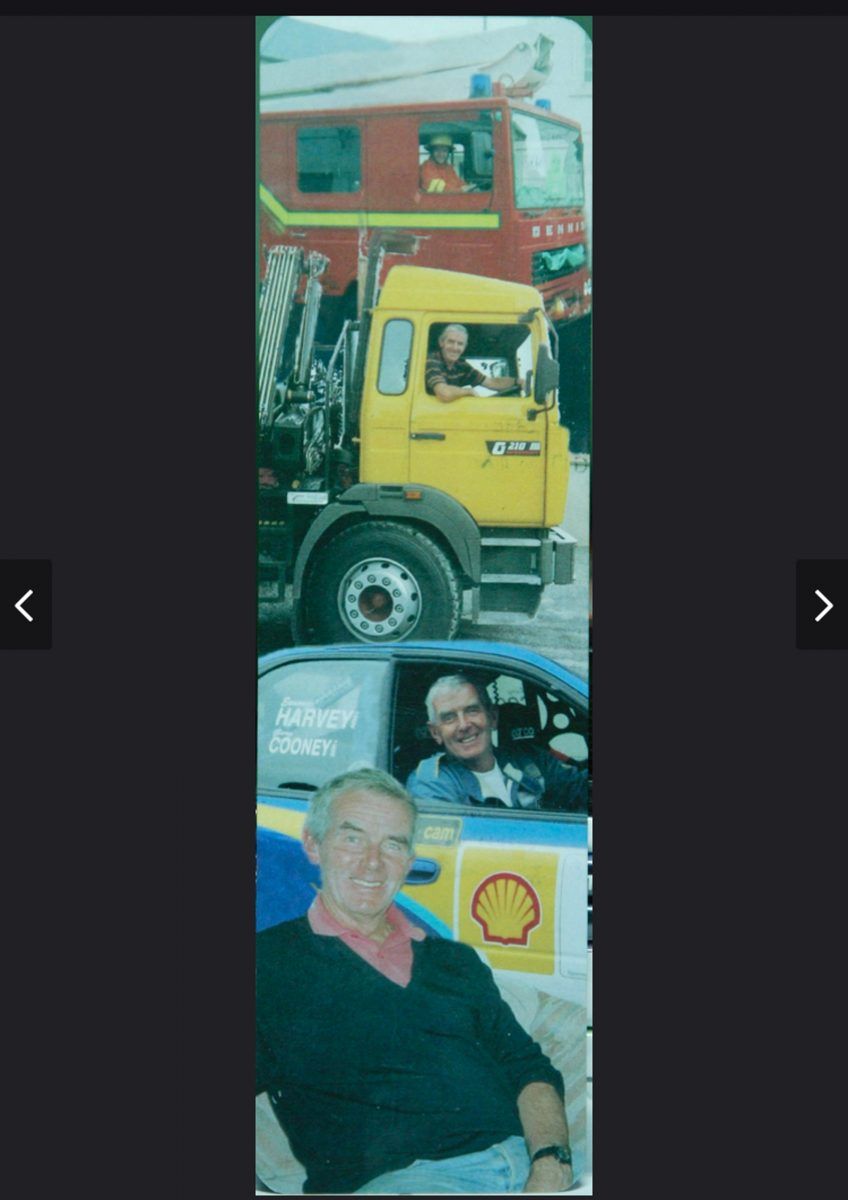 The man himself the late Eamon Harvey behind the wheel of a fire engine , a council Lorry and and a rally car

On a winter’s day just after Christmas and days like these I told him of my Christmas and birthday present – the forthcoming trip to Monte Carlo to watch the year’s opening event of the World Rally Calendar. We talked about the type of weather that the Monte Carlo might throw up in January the driving conditions and then in a moment of silence as Eamon was tiring he said, ‘You’ll see your 40th Birthday celebration Brian but I doubt if I’ll get to see my 60th birthday’ (which was in June later that year)

Time flies and I find it hard to believe that I’ll be soon two years short of what Eamon was when he passed away, at 59. It only seems like yesterday that things were coming together for drive down to Monte Carlo to raise funds for the Donegal Hospice in memory of a great driver. 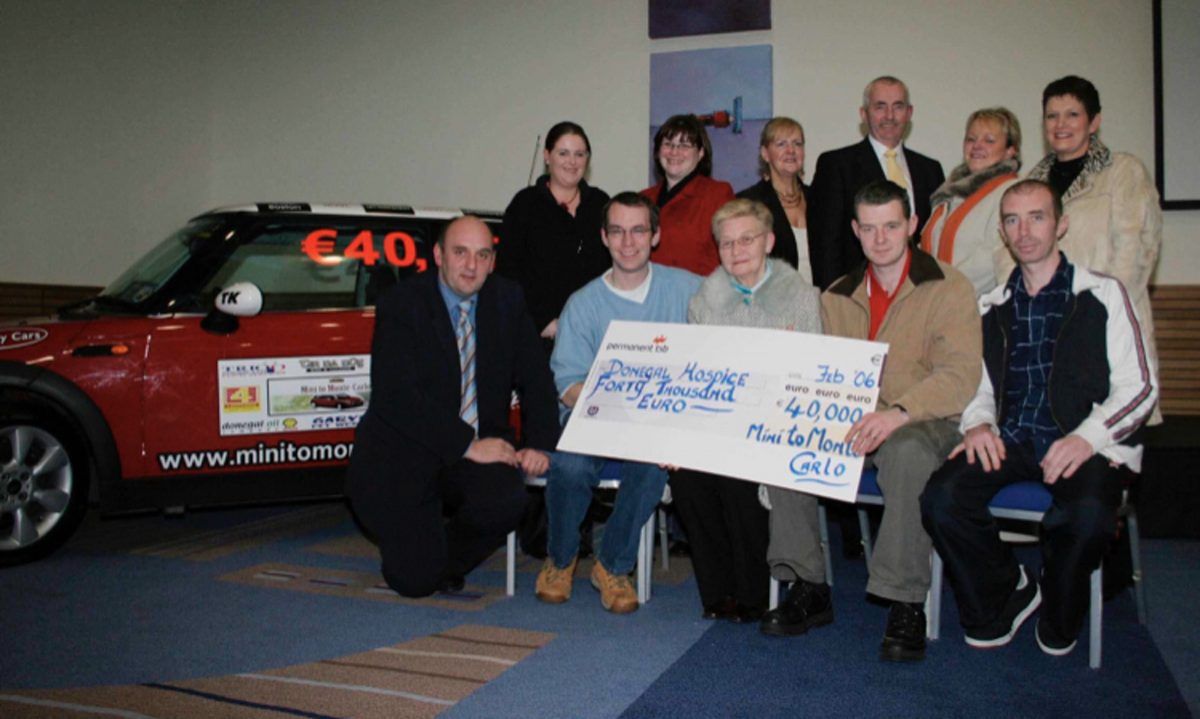 The Harvey family including the late Nigel Harvey who presented the funds to the Donegal Hospice.

It took me two years and one Christmas holiday to pick up the courage to embark on the journey.

Eamon’s death at the start of a New Year and his illness on the run into Christmas was near enough carbon copy of my mother’s passing in 1970 many years before, so for most of my life I would just let on, join in the festive celebrations but deep down I always felt that I couldn’t wait for Christmas and the New Year to be over so I could put that time of year to the back of my memory for another year.

For some reason this year, more than any other, is a year that I need to draw on the highs of the adventures of Monte Carlo in January 2006.

Maybe it’s the suppression that COVID and the lockdown has had on this year as people that you were close to left this world and you were able to mourn their passing which has taught me to live in the moment and follow your dream because things can change very quickly in these challenging times. 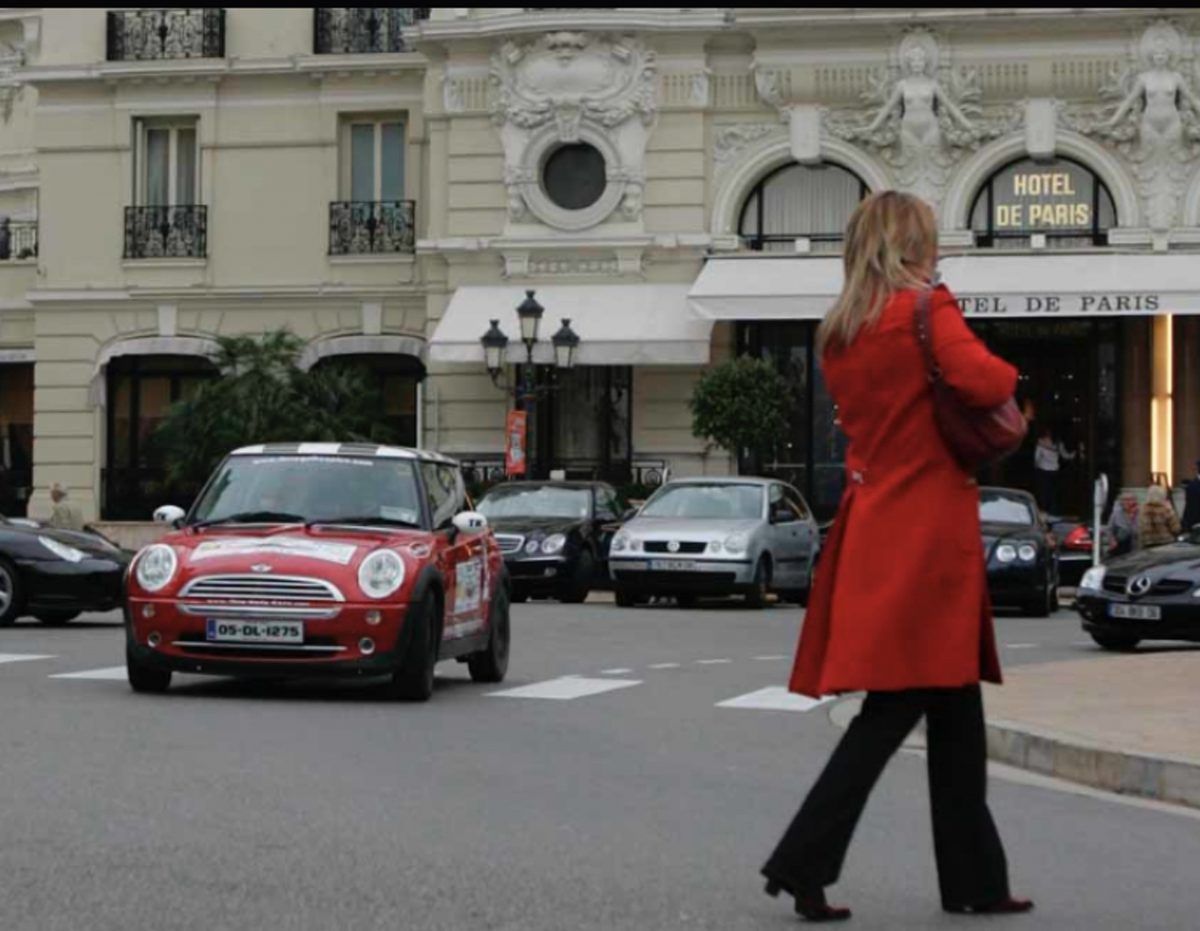 Little red number. Our Mini heading past the Hotel De Paris in MonteCarlo in 2006.

A brief history on the Mini journey.

The Mini to Monte Carlo had a good few hiccups on and before, and after the event but the good points by far out weighed them, it would be impossible to know where to start if you were to thank everyone that helped along the way. But it would be easier to remember some of the people that I met on the journey that are no longer with us that played their part by supporting or encouraging, supporting and getting involved all helped along the way.

People like the late Atley Stewart who we met by pure chance in the car park at the Silver Tassie on Sunday afternoon as both of him and Maple were standing looking at our Mini in the car park. They told us his Mini story sitting in our Mini Cooper along with his wife Maple. 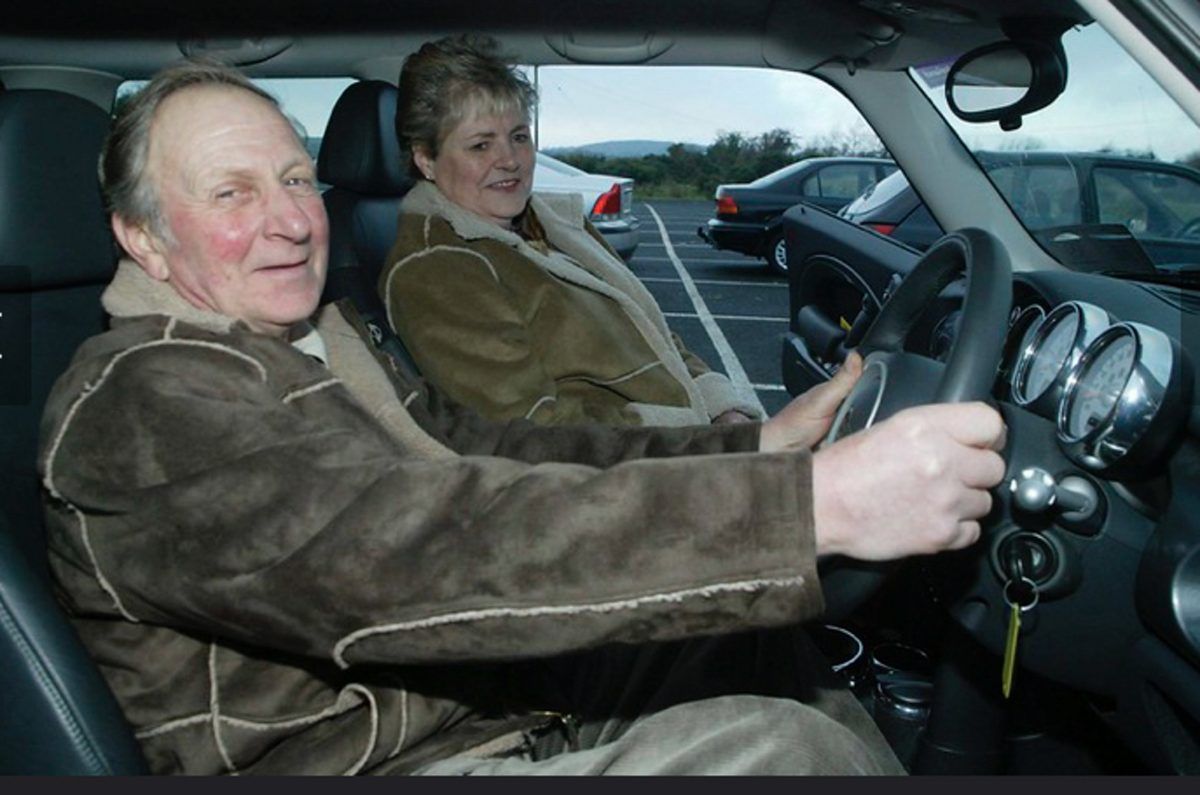 The Late Atley Stewart pictured with his wife Mable pictured in our Mini Cooper, Atley had one of the original Cooper S Mini in the 60’s

Atley owned one of the original Cooper S’ in the sixties ‘BIH 762’ it was a very fast car in its day, as he described it. I knew Atley for years working in the saw mill in Kelly’s cutting timber but that day I seen Atley cut a different story of him and Mable from the sixties cutting through the roads of Donegal in their Cooper S.

Meetings like this were so important in our journey, where a car could join people with a common interest, they filled the tank with belief for me that we were on the right road at the time. 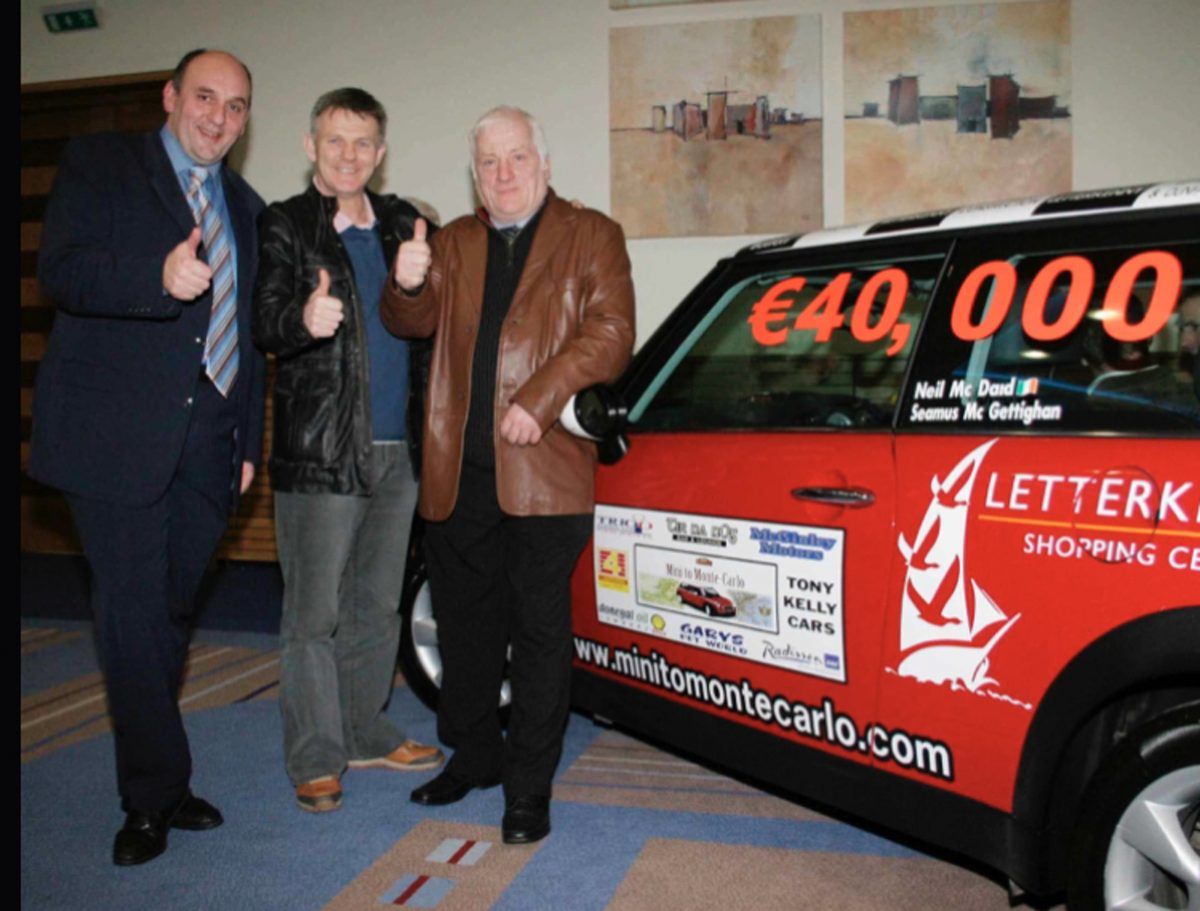 Guest navigators for the trip Rory Kennedy and Seamus Mc Gettigan and the presentation night. 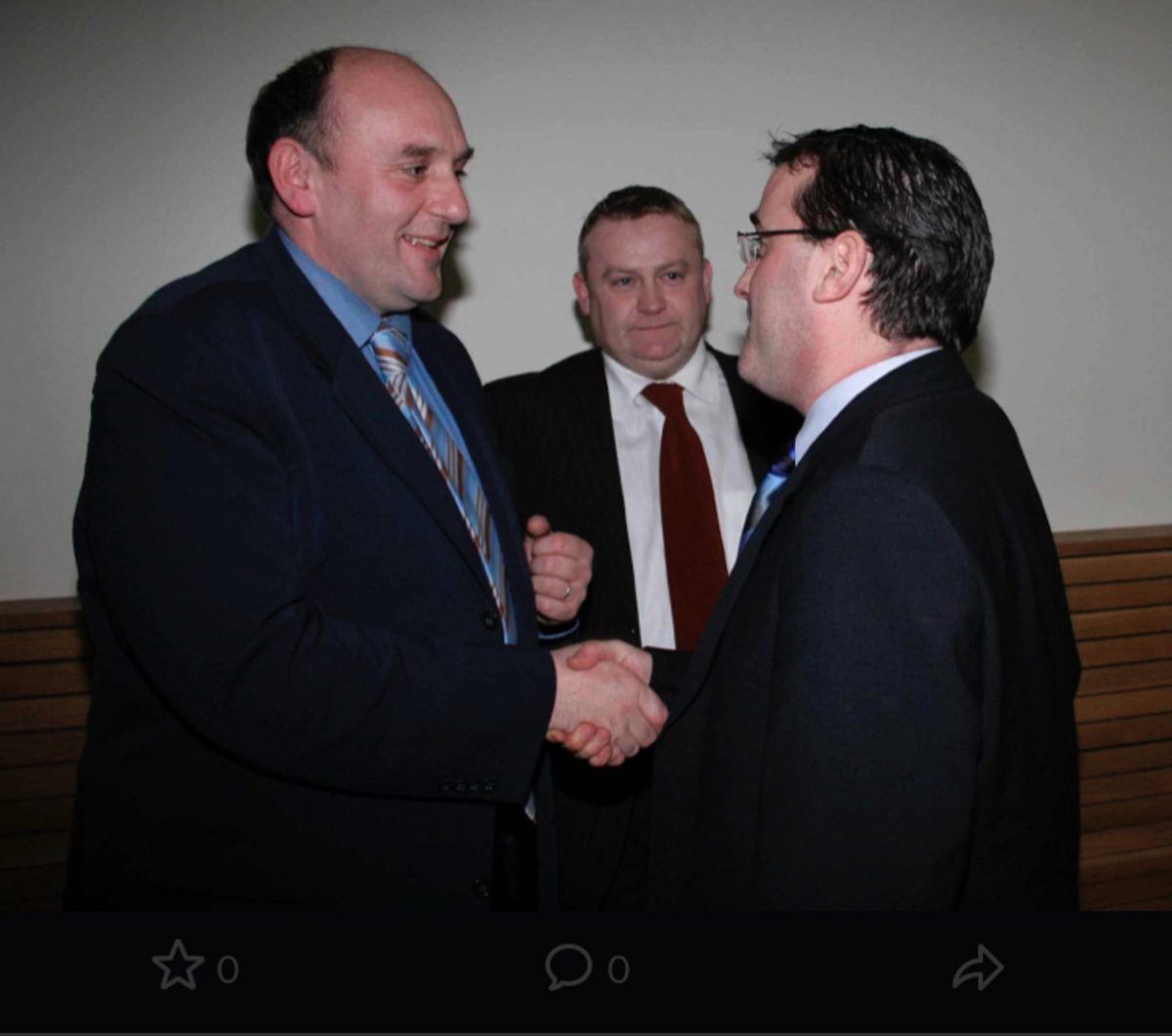 The Late Dessie Larkin with Paul Byrne from the Raddison Hotel and myself at the presentation night. 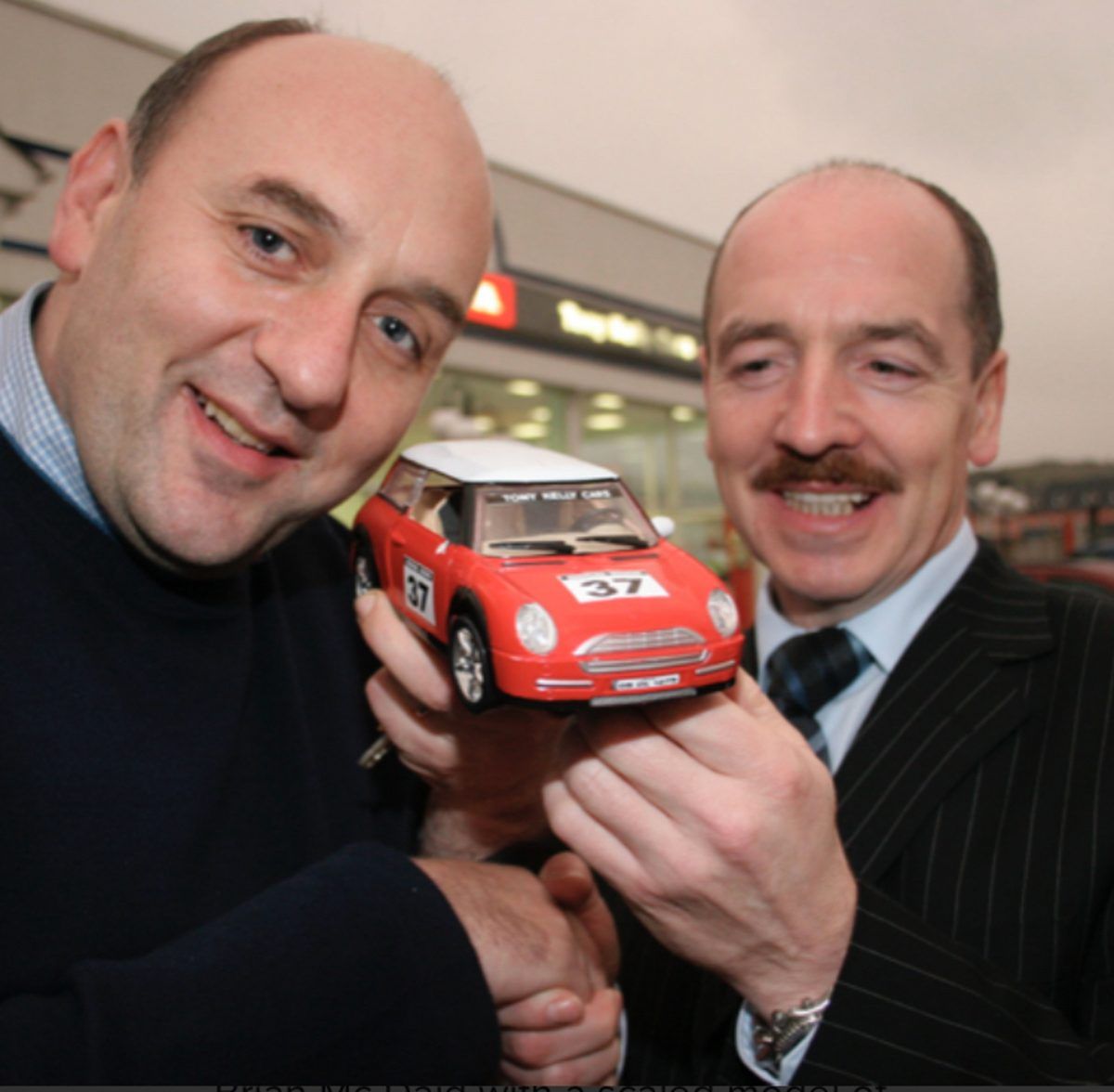 Tony Kelly who supplied the Mini Cooper for the charity run in aid of the Donegal Hospice.

The late Dessie Larkin, who was the Mayor of Donegal at the time, got the ball rolling to make the first donation on the air on the Highland Radio show presented by Shaun Doherty. Dessie was always on hand to promote the event as a local representative and friend. 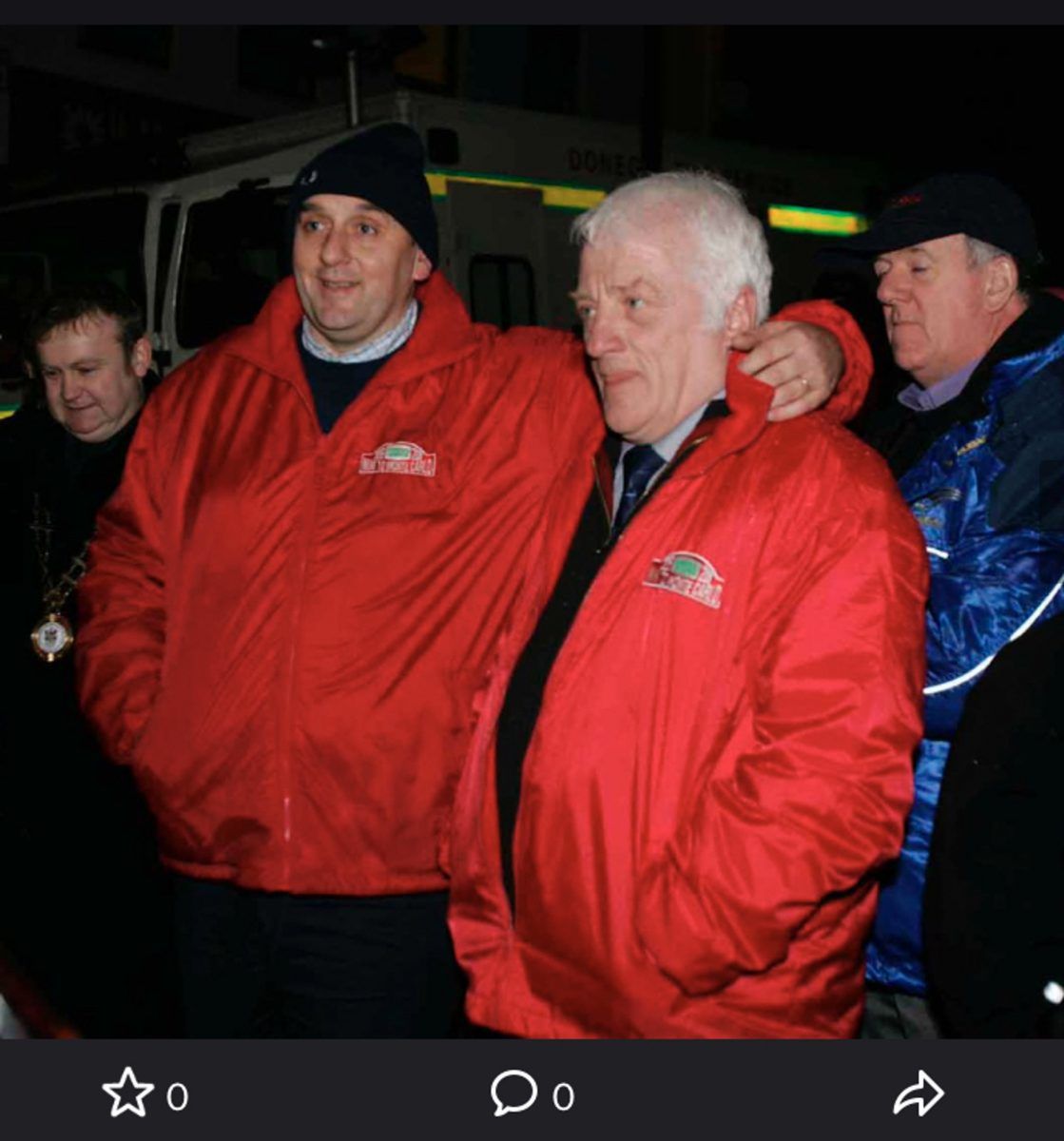 The Late Dessie Larkin pictured at the start of the trip with myself and Seamus McGettigan and Ivan Furey. 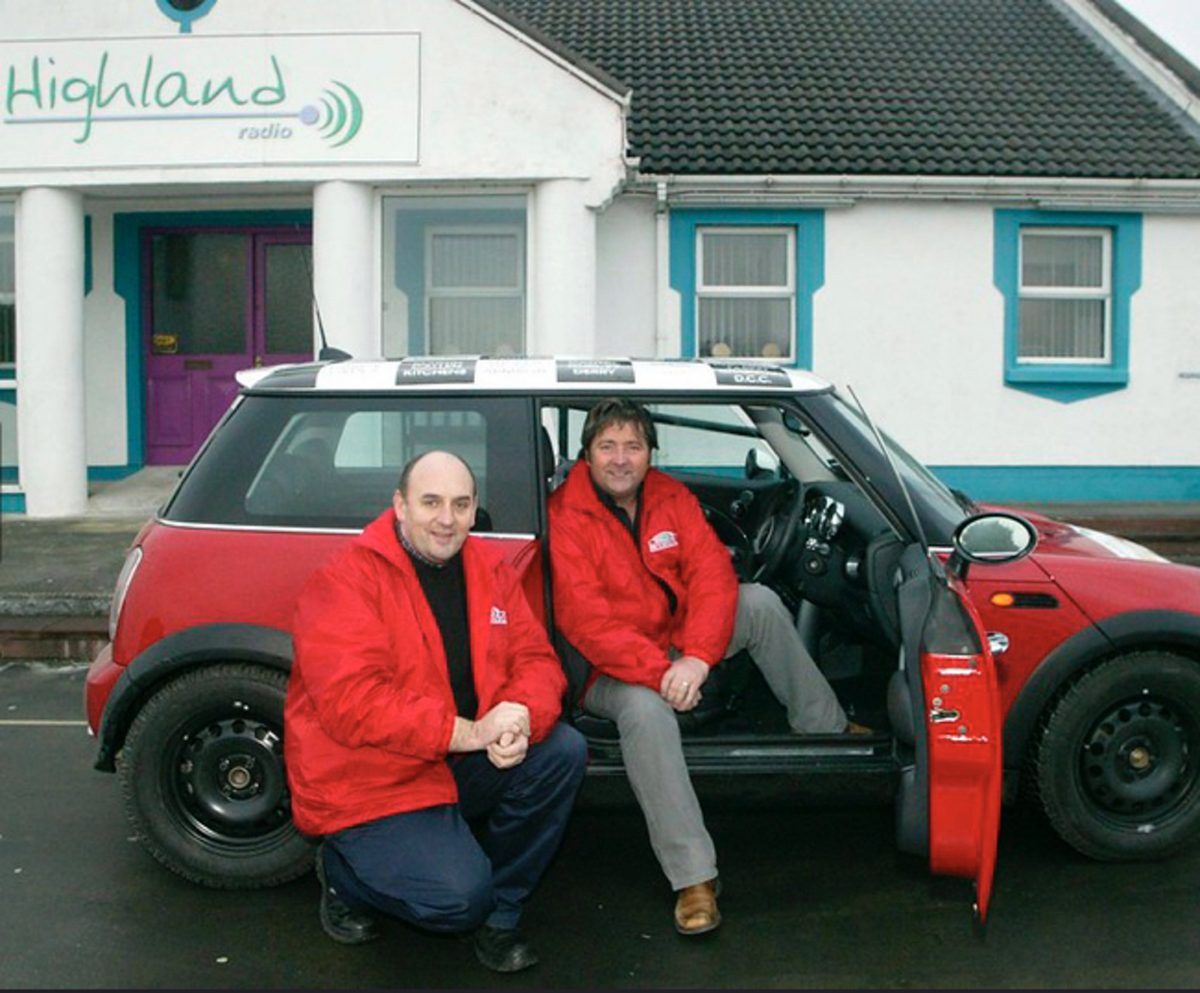 Shaun Doherty who was one of the great promoters of the Mini Run through his show on Highland Radio.

People like the late Gerard Hunter who was part of the Donegal Mini Club who included us on a run before the charity run right through to the late Eddie Curran and Frank Grimes who joined in on the run home from the Manor roundabout in our run down the Main Street. Great friends both of them all my life and always there to help and support. 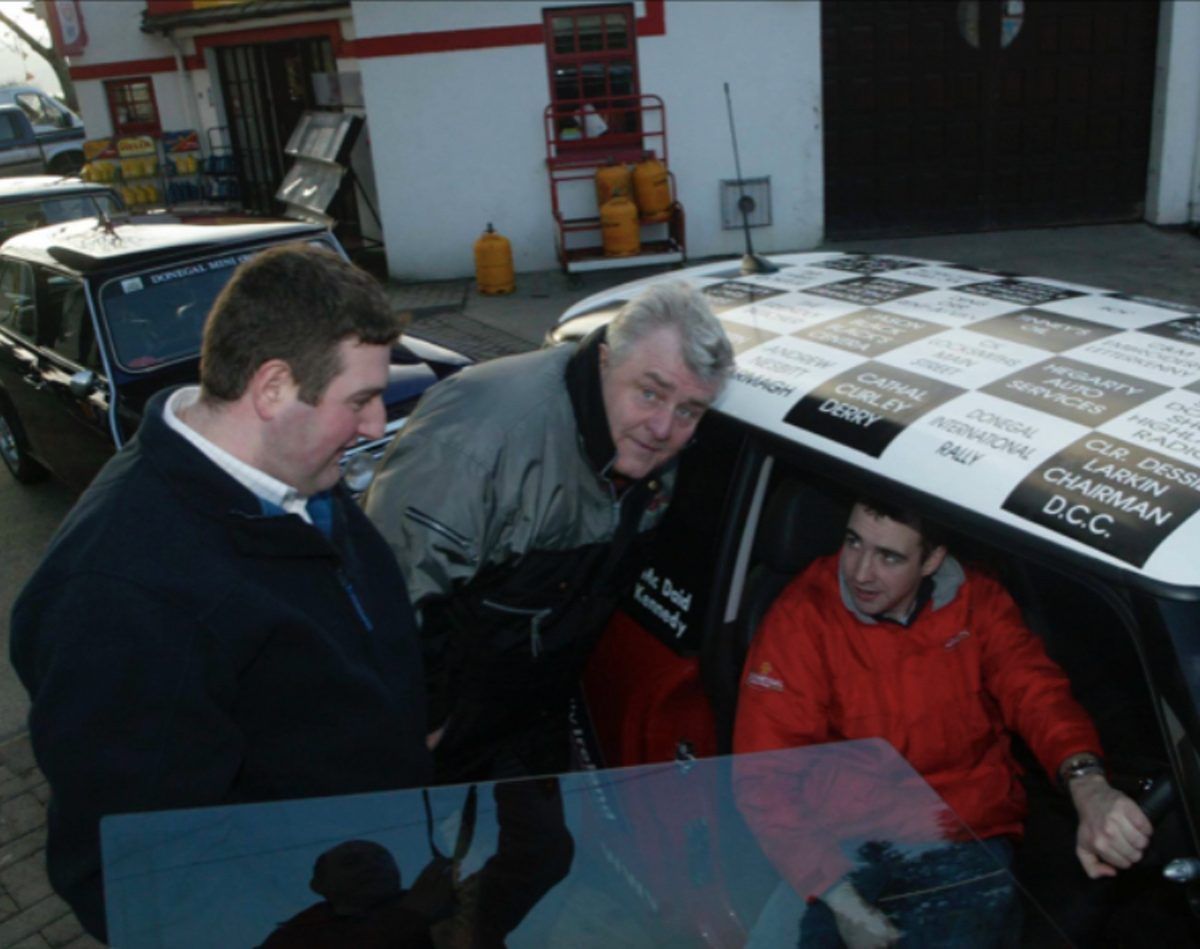 The Late Gerard Hunter looking at the Mini on the Mini Owners club.

In 2006 we took the memory of the late Eamon Harvey with us on our journey two years after he passed away on a fundraising trip to the rallying mecca centre of the world, my brother Nelius and I were privileged to met up with Paddy Hopkirk at his home Oxford, where he made us very welcome guests.

Driving Donegal registered Mini Cooper around both the F1 track and final stage in which Paddy Hopkirk drove his mini to an amazing overall win in 1964 ( the year and Month I was born) This was very special to me and to the memory of another great driver Eamon Harvey.

Guest navigators for the trip Rory Kennedy and Seamus Mc Gettigan and the presentation night.

The great Paddy Hopkirk looks at our mini at his home in Oxford. 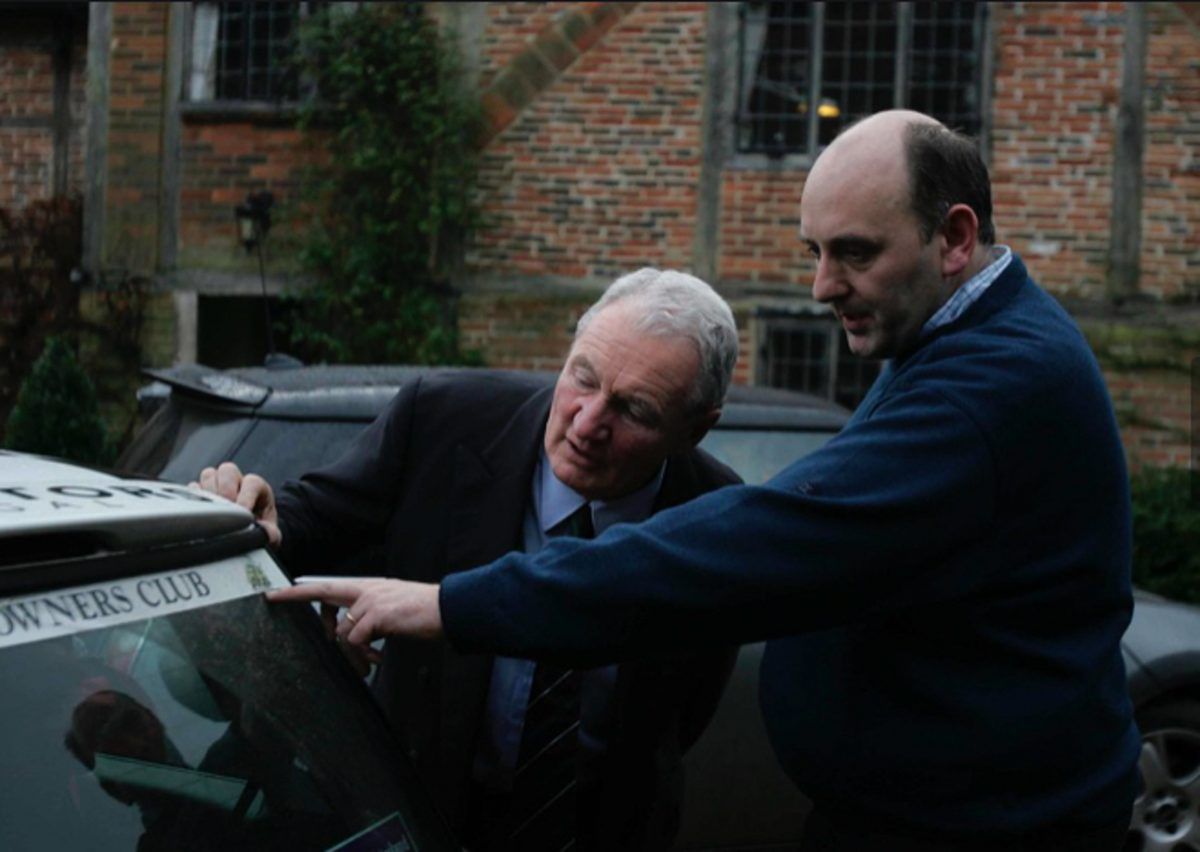 The great Paddy Hopkirk looks at our mini at his home in Oxford. 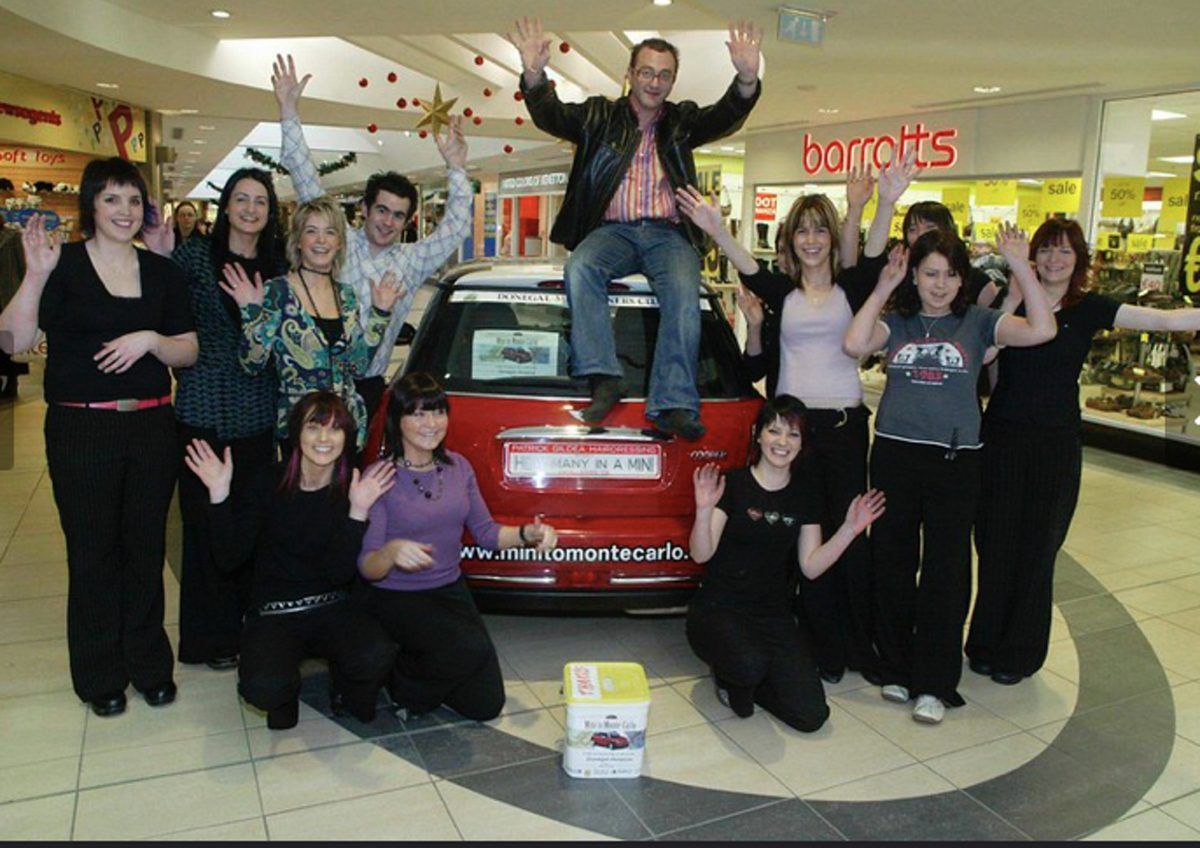 Patrick Gildea and staff who all tried to fit into the Mini in a fundraising drive at the Letterkenny Shopping Centre. 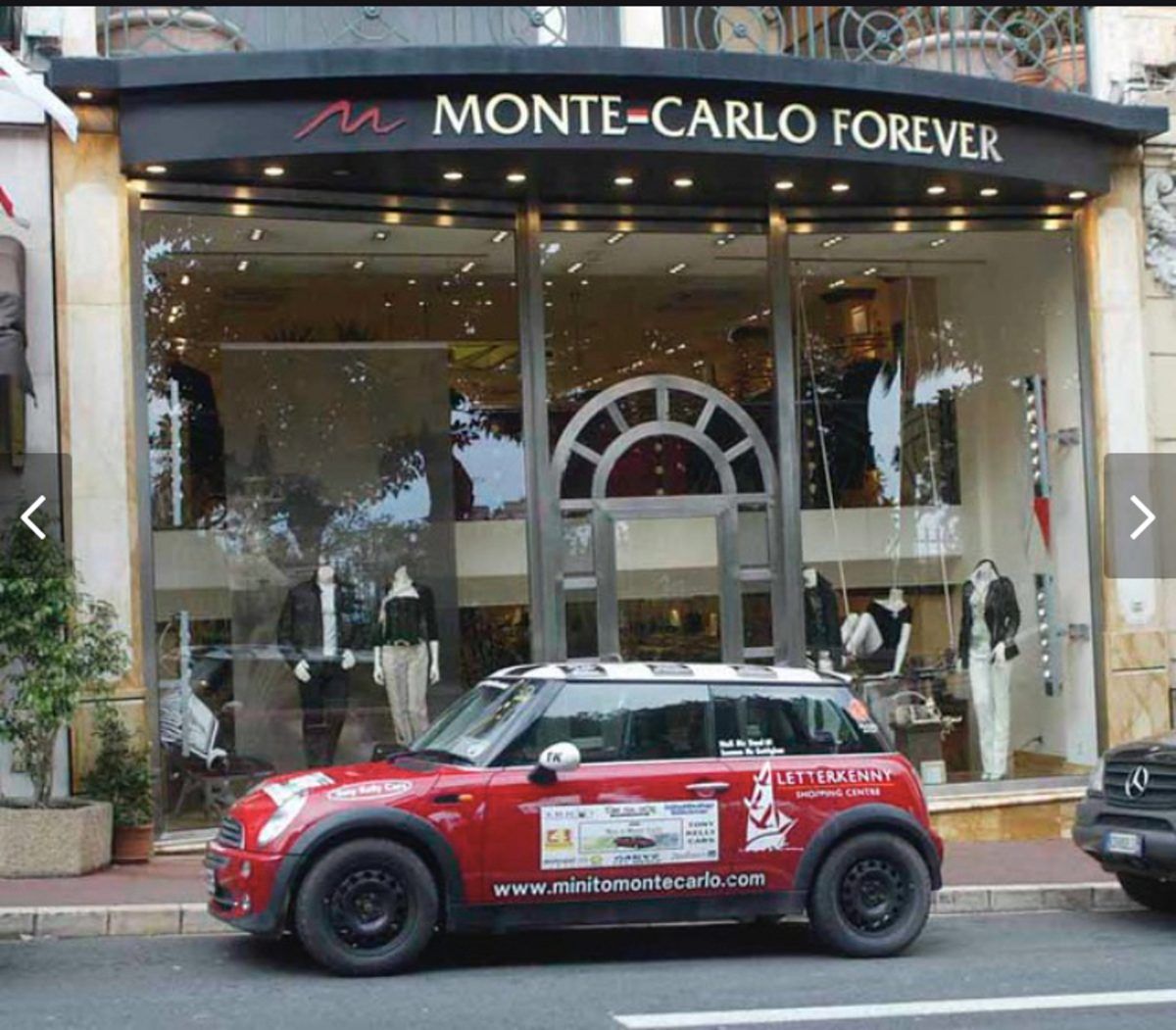 Parked up on the streets of Monte Carlo in 2006. 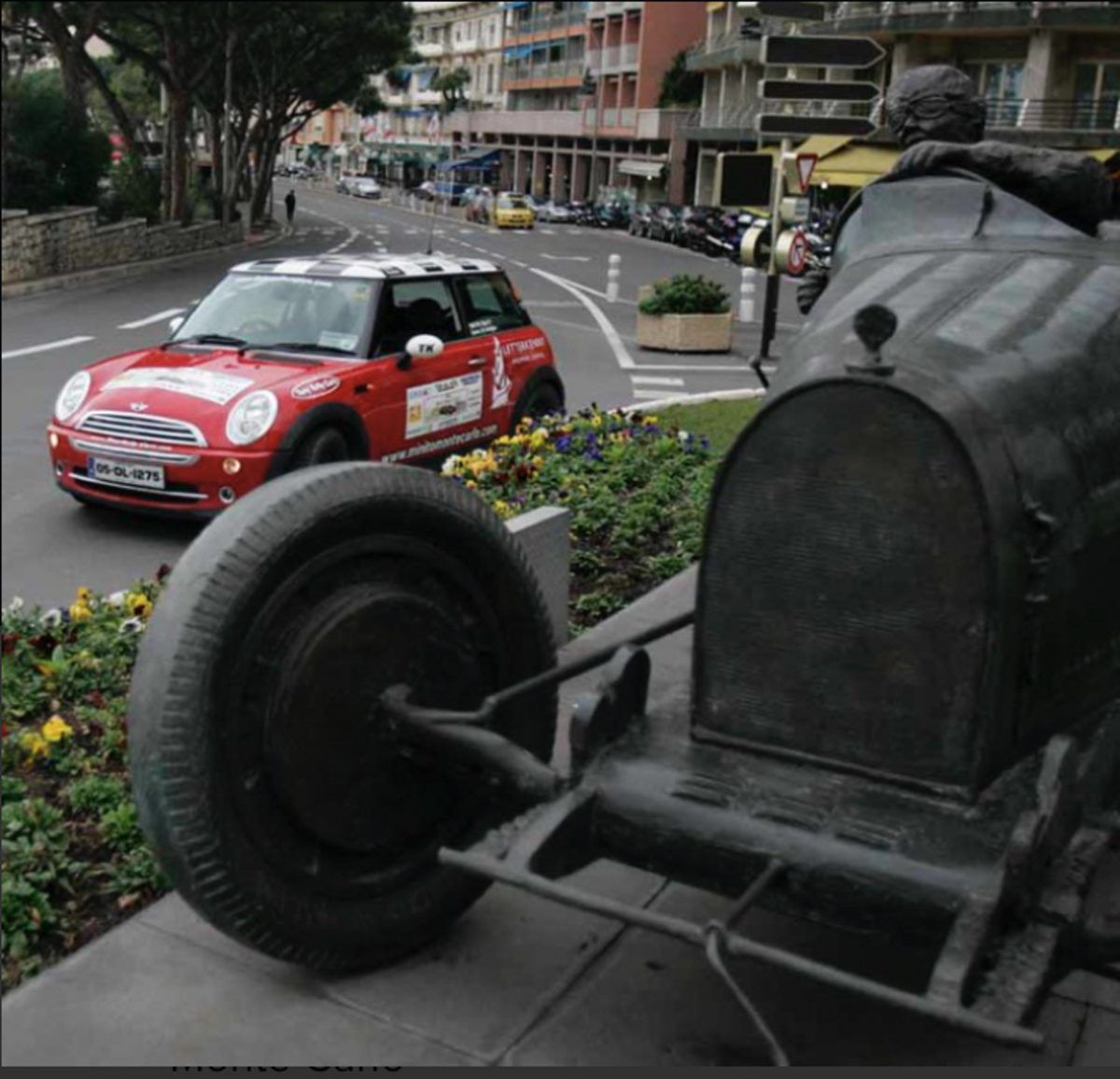 Our Donegal registered Mini on the Start Finish of the F1 track in Monte Carlo.