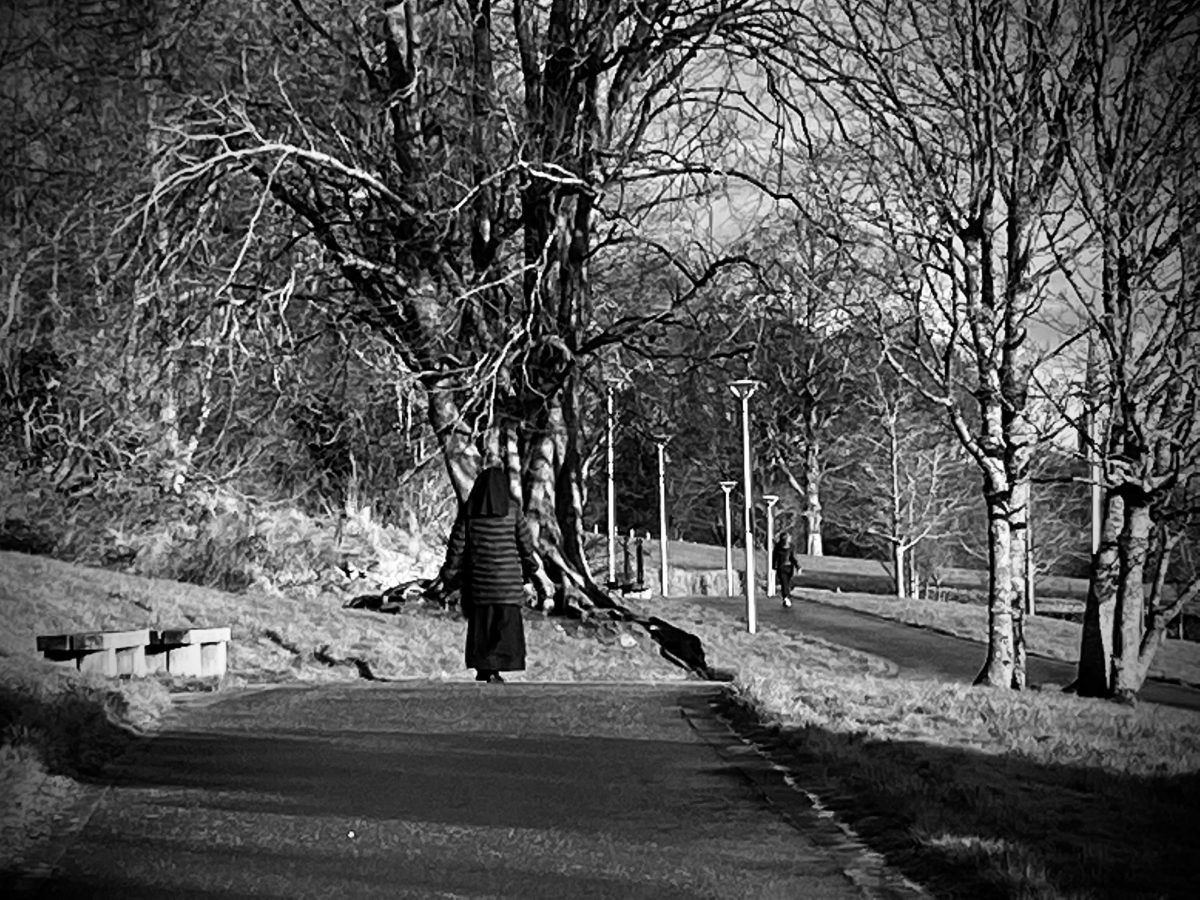 Do you know the history of Ballymacool Park? With close family connections to the area, Brian McDaid recounts rich stories that will help you see the park in a brand new light.

Auntie Maggie had a moustache. She would always say hello to us every Thursday evening as she stood at her gate at the top of Plunkett O’Boyle Terrace, waiting for us to arrive down the Back Road on our journey down from school.

On Thursdays where we went down to Auntie B for dinner. It was the highlight of the week. In the days when you could smell meatloaf beautifully made with love for us by auntie B.

My auntie B was quick to check us on our description of auntie Maggie, concerned that we might innocently describe our family relation like this in public.

Maggie was in fact our great aunt, the 2nd youngest sister of my granny, Bridget Coyle, (nee Doherty) 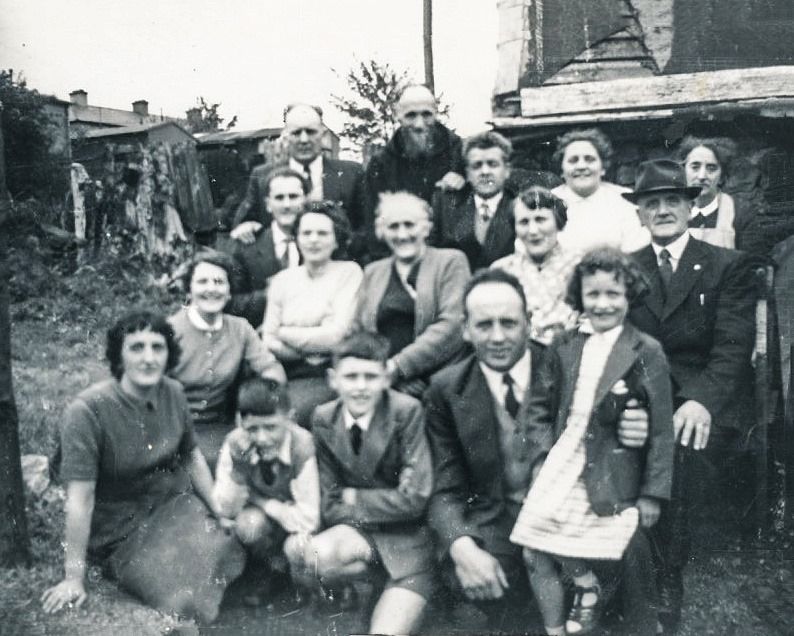 Great Aunt Maggie on the right at the back at the family get together on the back garden of the shop on the Back Rd. also pictured from left , front Mary Ellen Coyle, Billy, Seamus and Breda Gill Johnny Coyle, Middle row from left Rosaleen Gill, Agnes Coyle, Bridget Coyle, Margaret Devine , and Willie Coyle, Back row from left Hugo Coyle, Charlie Coyle, Fr Mark Coyle, Miah and Bida Deeney and Maggie Doherty.

On Christmas Day morning I went out for a walk in Ballymacool Town Park when I got home it was brought to my attention that I wore my new coat which I got from Santa with the price tag still on it.

Auntie B and Great Aunt Maggie, who were always looking out for us, were very much in my mind as we sat down to dinner on Christmas Day.

Over Christmas and going into this next lockdown The roads have gotten quieter and parks like Ballymacool have become the open space for people to get out rather than being stuck in the house.

Some would say that the design of Ballymacool Town park is poor and are critical of the walk up the hill to the most westerly point.

For me, hard and all as it is to climb that strip of land that takes you into the hills also takes you on a trip and comparisons of time and change in Letterkenny. 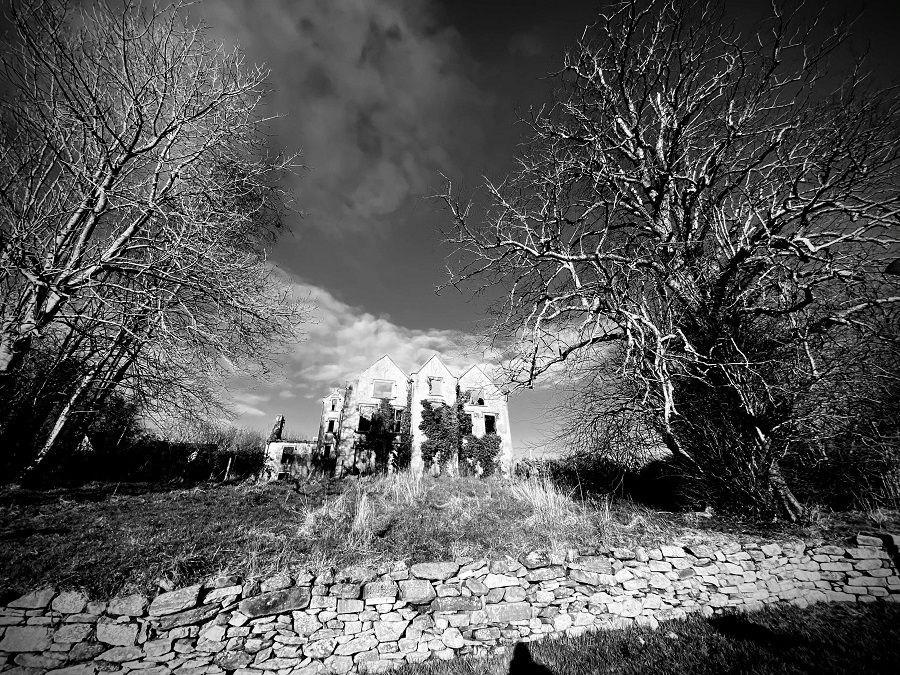 Mr and Mrs Crow and their extended family have always lived in the park. Ballymacool House is now part of their home as they fly in and out through the upstairs windows of the old house as their craw cackle echo off the historic wall steads when they watch from high in the mature trees that have survived the years of change.

The crows and ravens were there when the O’Cannon’s were the chieftains, and lived high on the hillside, watched when the Span family built their country retreat, when the Boyd’s extensively refurbished the house and developed the grounds, there when the Old IRA took over the house in the 1920’s right through to the urban sprawl of Letterkenny pushed its way up the avenue in recent times.

Over the holidays it was beautiful winter walking weather as long as you watched out for icy conditions of the footpaths with a lot of walkers ending up walking on the grass verge for a bit of grip.

Walking in these grounds gives me a powerful feel with the past. If you look closely old paths through the park can still be seen from a different era, (something that the present town park has highlighted with two sets of mounds ether side that highlight where the old walks through the park were in the times of the Boyd’s and later the Kelly’s of the Mill). 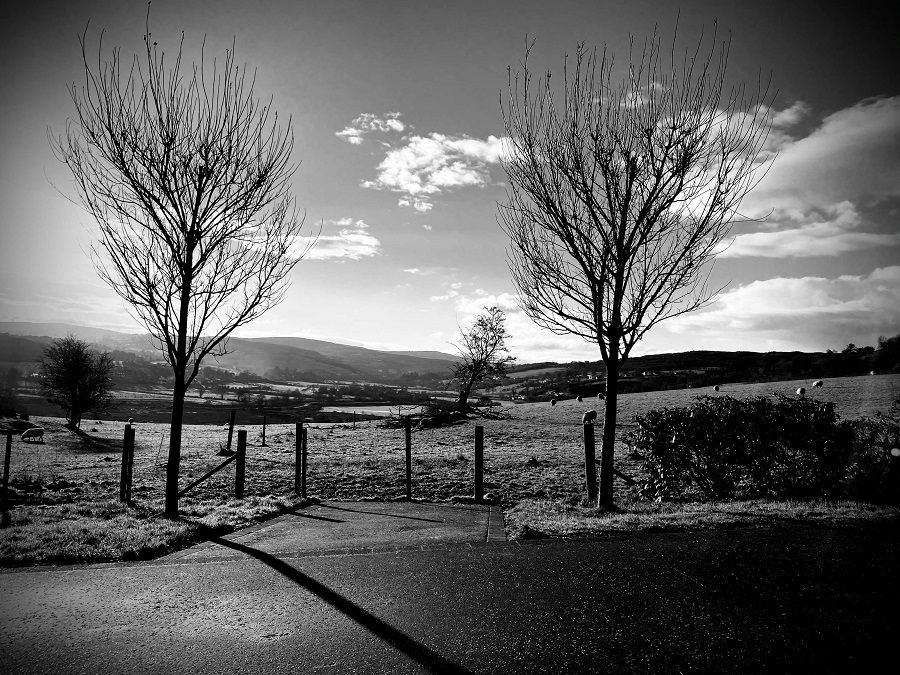 Two trees in Ballymacool Town Park mark out where the old main road once went through Ballymacool. Photo Brian McDaid. 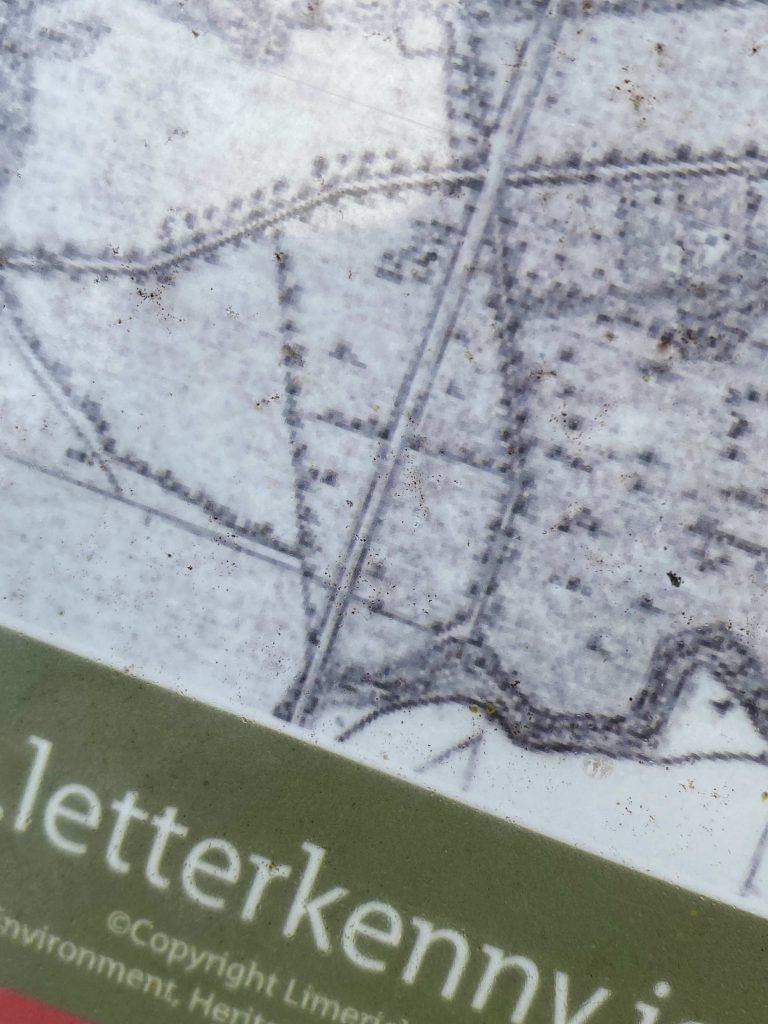 Stroan Brae on one of the old information maps in the Town park in Letterkenny. Photo Brian McDaid.

The most interesting one of these is the marking where the old main road which included ‘Stroan Brae’ once went through the park, went up around the back of Ballymacool House and ended up going down what is locally known as the avenue. 7

That was the layout before the Boyd’s arrived in 1830 and carried out an extensive renovation of both the house and grounds around it. Part of this refurbishment was to move the main road to the bottom of the gardens and run near enough where it is today. Then two gate lodges were built two at either side of the gardens.

John and Bridget Doherty lived in the outer gate lodge on the westerly side. They were my great grandparents and great aunt Maggie’s parents. The gate lodge had two rooms in which James and Bridget raised 9 children, 7 girls and two boys. Hugh, Ellen, Bridget, Cassie, Bella, Anny, Maggie, Rose and James. 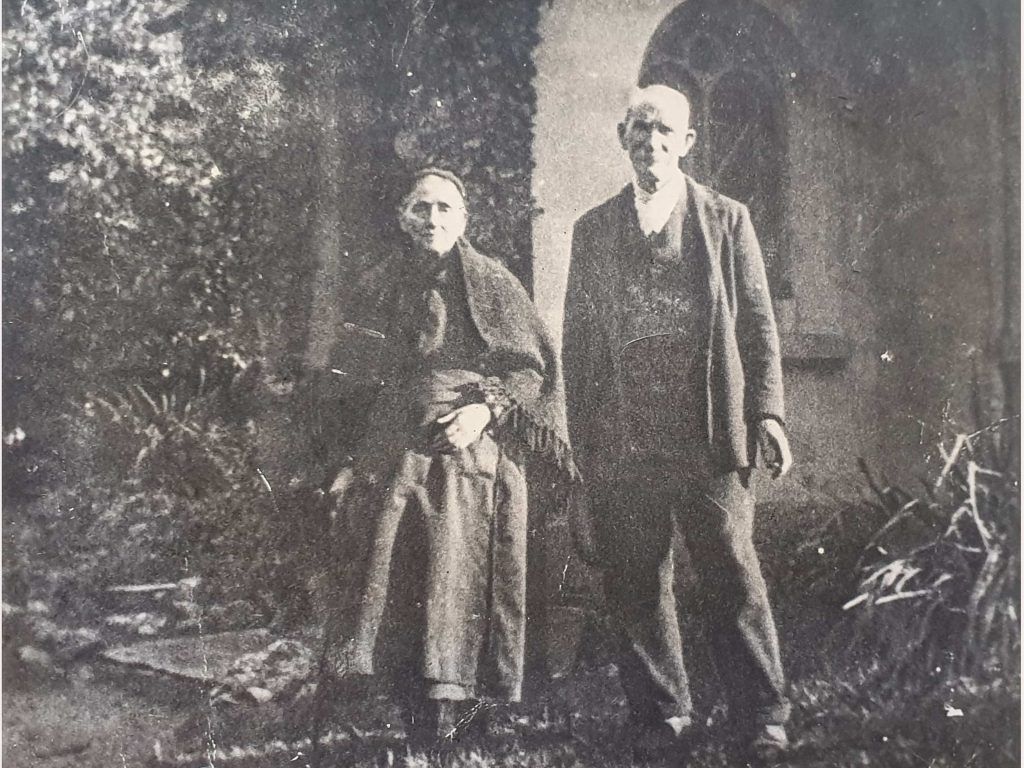 Great Grandparents John and Bridget Doherty pictured at the front door of far away gate lodge in Ballymacool where they reared 9 of a family. 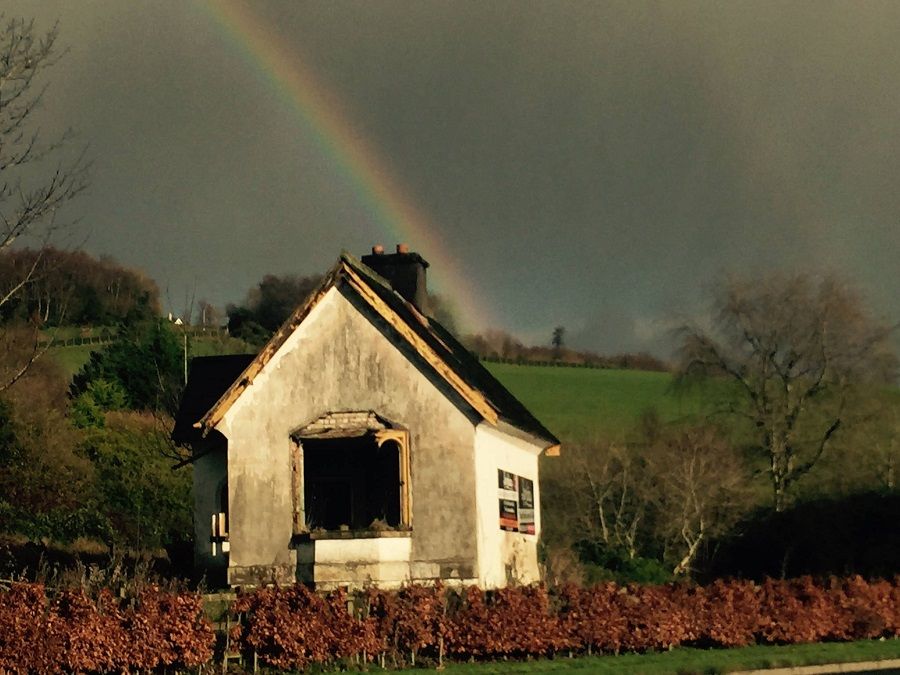 A present day view of of the old gate Lodge in Ballymacool. Photo Brian McDaid.

My auntie B, Bida called after her mother and grandmother, was one the oldest girls in the Coyle family.

On Thursday afternoons when we weren’t watching ‘Lost in Space’ on TV, Bida passed on the family history that my mother never got a chance to tell us. Stories of days when she and her sisters Rosaleen and my mother Mary Ellen and Margaret would head out from 19 Ballymacool Tce to the outer gate lodge to visit their granny to where their Auntie Maggie who looked after her mother would be waiting to greet them. Around this time of year just before Christmas it was tradition for our family to get invited up to Ballymacool House – an invite from the Boyds that was extended to the children of the children. Great aunt Maggie would head off with nieces up Stroan Brae on the old less-used avenue on the western side of garden dressed in their Sunday best to a Christmas party for residents and their families. 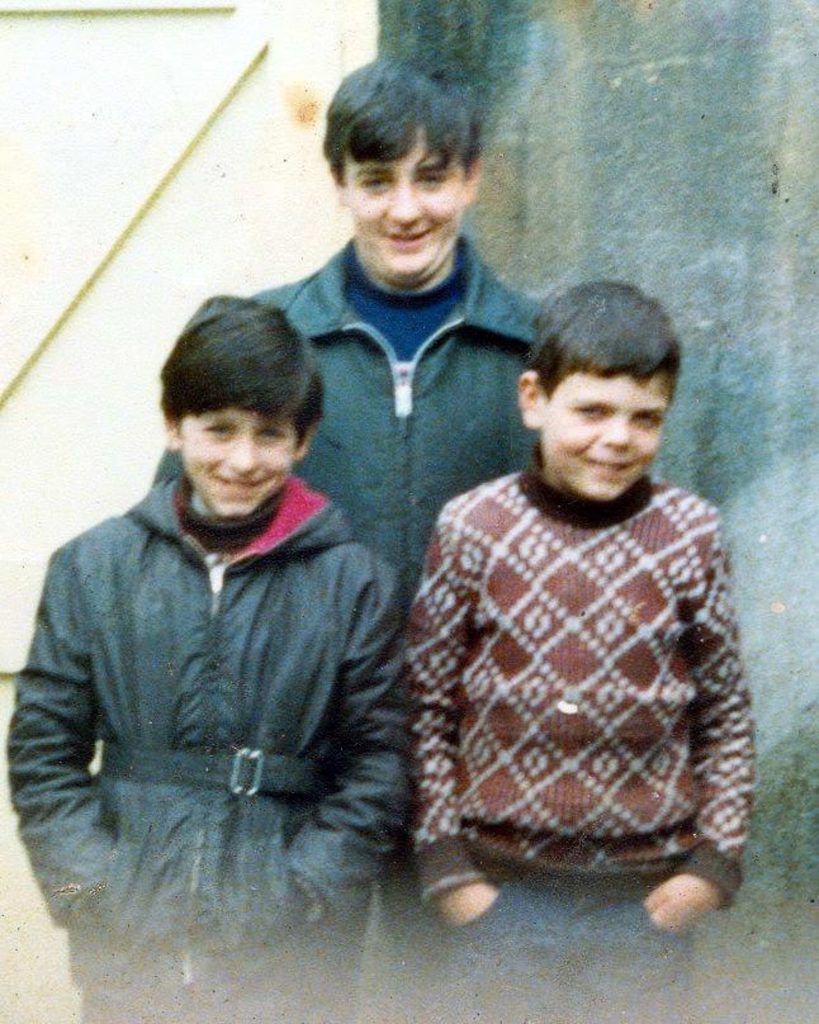 Three of four boys Peadar, Cathal and Brian arriving at the gate of or Auntie B’s for dinner on the Back Road.

There is only the one tree left in the present day Ballymacool Park part of Kelly’s lawn as it was known that was also there in the Boyd’s time. Its along the path to the west of the now derelict remains of Ballymacool House. That path is over one of the old paths or road way that run along the front of the house. The base of this tree has many limbs very low on its trunk.

On the Census of 1901 great auntie Maggie was an infant, just a few months old my great grandfather John was the garden labour. Over Christmas, the thought crossed my mind about how many generations would have passed this tree on the lawn over the years. My great granny was the gate keeper, and in older years great Aunt Maggie and her oldest brother Hugh never married and looked after their aging parents in the outer gate-lodge

The late May Mc Clintock, teacher and historian found a passage from a book on the memories of one of the Boyd Family, Mary Rosalie who would go down for a cup of tea and a chat with Mrs. Doherty (as she described her) when she came home to Ballymacool House from her trips around the world. Her last visit to the gate lodge was to visit Mrs Doherty who was ill and was confined to bed, but on the day the Mary Rosalie visited Mrs Doherty she was determine to get up to greet her visitor. 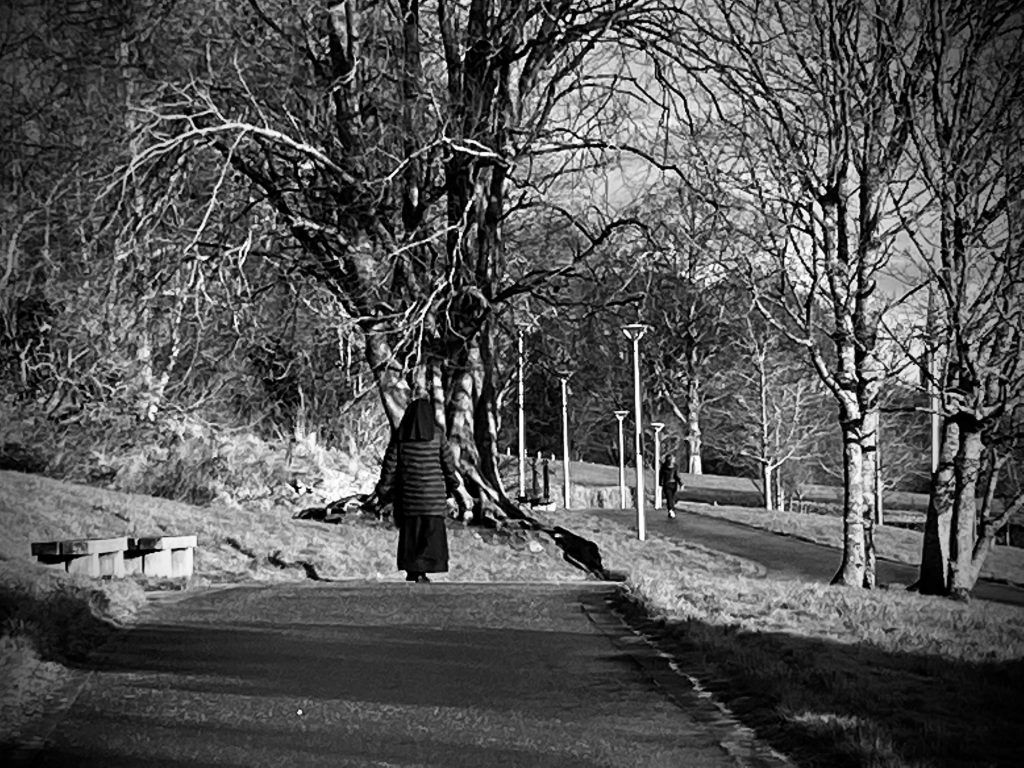 As I was passing the old tree this week I stopped to get a picture, camera set to black and white, composing the picture a Sister of Mercy ended up walking into my photo, with her rosary beads in her hand, as she walked past the old tree I press the button freezing her and my memory in the one moment. I thought again of people like Great Aunt Maggie and Auntie B who made it their vocation in life to look out and look after the older and younger generations of the Doherty family that passed through gates in life of the pathways old and new in Ballymacool. 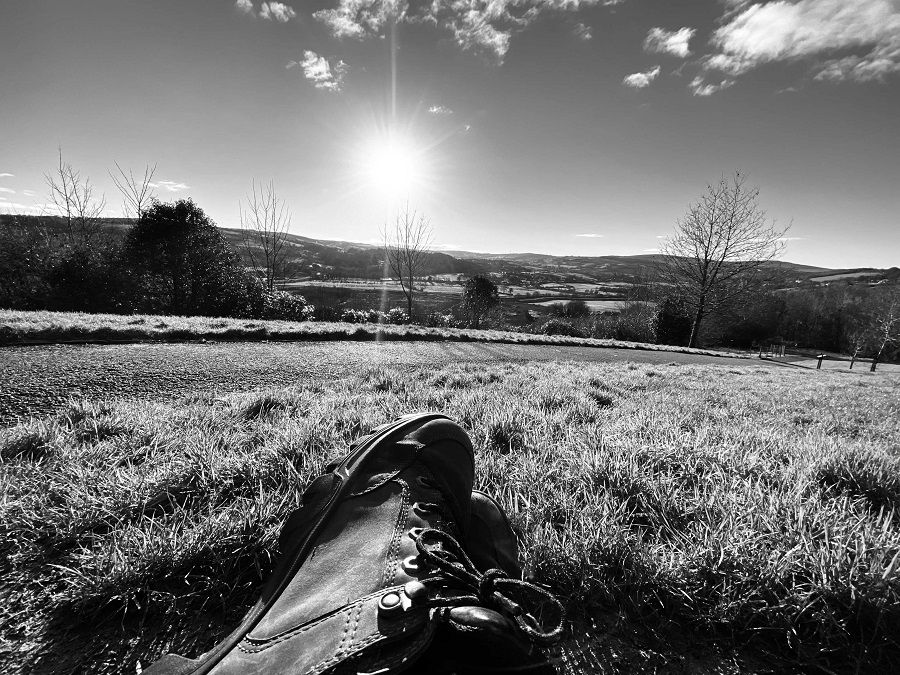 Taking a break and thinking on the past on the hillside of Ballymacool Town Park. Photo Brian McDaid.

A word of thanks to the late James Doherty the youngest of the family reared in the gate lodge in Ballymacool and his extended family who have preserved a lot of the history of our family on the Doherty family plot grave stone in Conwal, and to Cassie Sheils’ ( Nee Doherty) extended family, who have preserved the old original picture of the great grandparents at the gate lodge front door. if you look closely you can spot one of the grandchildren at the doorway.

Great Grandparents John and Bridget Doherty pictured at the front door of far away gate lodge in Ballymacool where they reared 9 of a family.