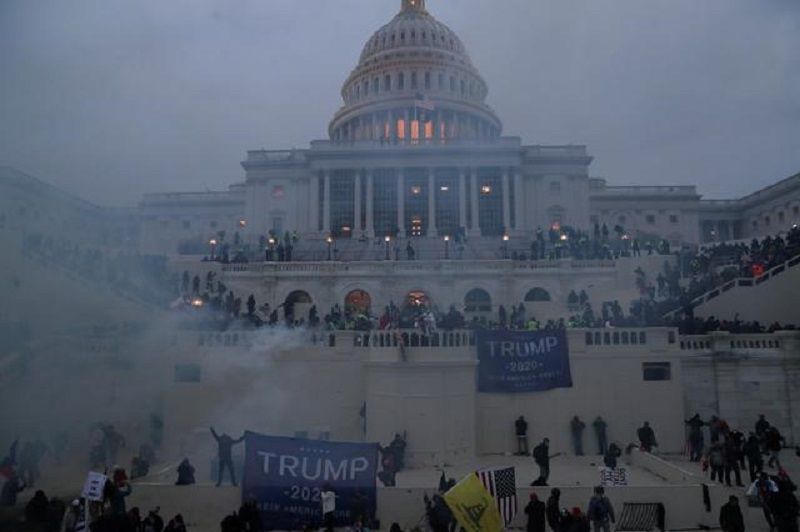 Four people have died in Washington DC after pro-Trump supporters stormed the US Capitol.

Violence erupted in the Capitol complex yesterday evening when rioters broke into the building to fight against the counting of votes that would secured President-elect Joe Biden’s win in the 2020 election.

One woman was shot by police inside the Capitol, and three others died after suffering medical emergencies, police said.

Protestors breached the halls of Congress, ransacked rooms and demanded the results of the presidential election be overturned.

Members of Congress were forced to take cover, before Capitol Police evacuated lawmakers from the floor.

Congressman Brendan Boyle, a Philadelphia Democrat whose father Frank is from Donegal, said members were warned told to silence electronics, lock door and shelter in place.

Rep. Boyle tweeted: “It is a bizarre feeling to be sitting in my House office working on finishing my speech to defend our democracy, while hearing sirens and commotion just outside and getting constant evacuation alerts. Never imagined I would see the day.”

Another comment from Rep. Boyle said: “We will not let some band of thugs stop us from doing our constitutional duty. Our democracy is at stake.”

“I never in a million years thought I would see this on the hallowed grounds of our nation’s capital,” Rep. Boyle told CBS Philly. “Make no mistake about it, this crowd of thousands of people who want anarchy will not win. We will still carry through and do our duty and democracy will survive this.”

An overnight curfew was enforced in Washington from 6pm. Once the Capital was secured, the Senate and House both reconvened late Wednesday to resume counting the Electoral College votes.

Meanwhile, Donald Trump was temporarily banned from Twitter and Facebook after posting to supporters involved in the riots.