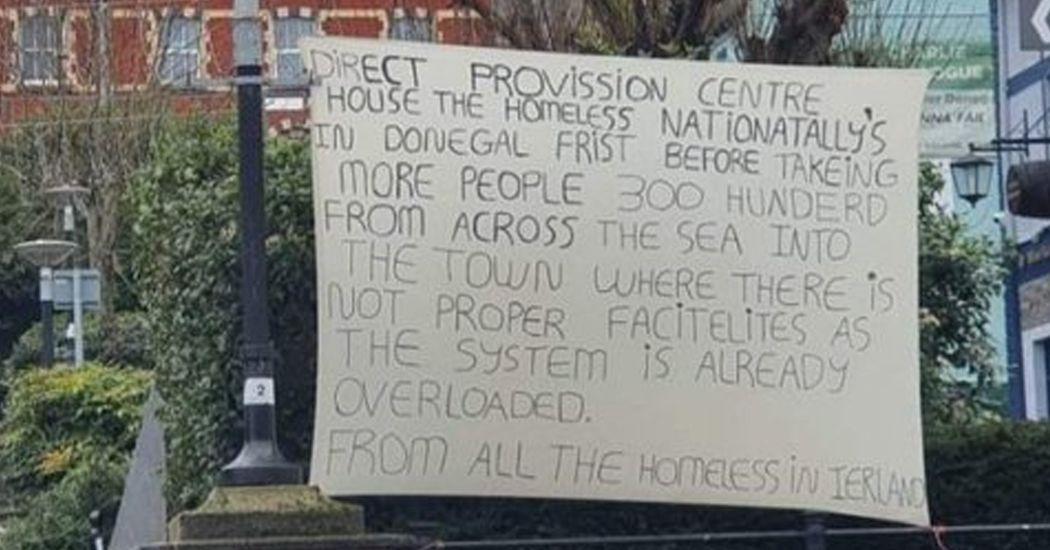 Plea for understanding as sign protests against accommodation centre

Signage in Letterkenny protesting against a new accommodation centre has been condemned amid calls for empathy and understanding for asylum seekers.

A large sign first appeared on the Market Square on Sunday calling for homeless issues to be addressed before refugees are brought to the town later this month.

The sign was later taken down. The handwritten words appeared to protest against plans for the new ‘Port Road Accommodation Centre’ opening in Letterkenny in late January. Former student apartments on the Port Road are currently being prepared as own-door independent living facilities for up to 60 families.

The subject of the sign has been criticised for addressing two matters as one.

Local Sinn Féin Councillor Gerry McMonagle has called for greater understanding. He said: “I wouldn’t support what this sign is saying, far from it.

“I would ask them to think about what they are objected to, we are not talking about homelessness here.

“There are two different issues – there is the homelessness issue that we do have, that we in Sinn Féin have been putting forward a number of suggestions over the years to help address, and then there’s our responsibility to people in desperate need of relocation from war zones around the world.

“We as Irish people know better than most about having to leave our country in times of strife, famine and downturns and being welcomed into other countries.”

“I think it’s the right thing we are doing, we are providing housing for refugees who are coming from parts of the world where horrendous thing happen.

“The houses and apartments they are moving into were not in the public domain, they were run by private individuals so they weren’t open to everybody else,” Cllr McMonagle added.

A Letterkenny Friends of the Centre Group is being set-up to promote integration opportunities for residents of the new accommodation centre.

Meanwhile the Department of Children, Equality, Disability, Integration and Youth said it is working with the HSE, the Department of Health, the Department of Education and Tusla’s Educational Support Service TESS and the Department of Social Protection to ensure that the necessary supports are available to centre residents, with no disruption to services for the local community. Details of the preparations have eased concerns which first arose with the news that Letterkenny would be home to up to 350 new residents. Local councillors met with department officials in December to gain assurances on the facilities and services which would be provided.

Cllr McMonagle added that elected members took the assurances at face value. “The apartments are being secured for families, there is going to be a playground and the necessary medical and educational needs of these families will be met. We will take what we were told at face value and if that doesn’t happen, we’ll be raising our concerns and the concerns of others in the town.”

He added: “I think we should give it a chance, and look at these people coming from bad places, they have been maybe on a journey for a number of years now, they have been basically incarcerated, and at long last they are going to get somewhere to live as families and live openly and contribute to the local society, which I am confident they will.”

Letterkenny Community Activist Finnian O’Donnell also condemned the signage and said: “The vast majority of people in our town are welcoming, kind and tolerant people. We thrive on cultural differences and diversity. However, there are those who wish to keep us divided and the far right are attempting to implicate this.

O’Donnell added: “Socialists and republicans alike will never accept this disgusting racist attempt to demonise foreign nationals. We welcome all refugees in need of shelter and safety. To use the current housing crisis as an excuse to attack refugees and blame them instead of our current and past government just shows how small minded and how low the far right will stoop.”