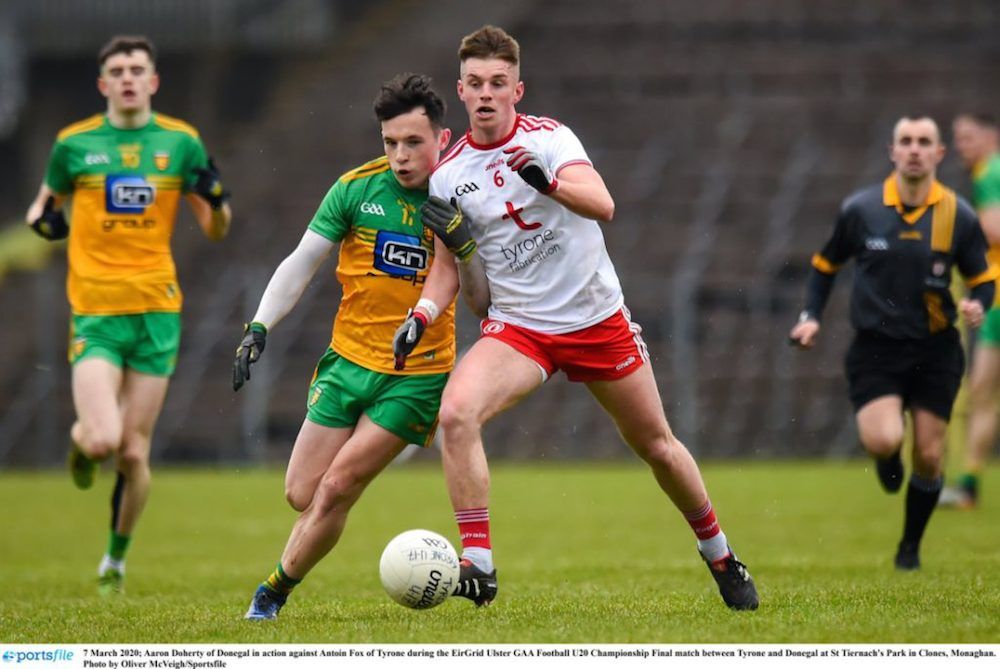 RISING Donegal football ace Aaron Doherty was named as one of the top 20 performers from this year’s Under-20 Football Championship.

Doherty was named as one of 20 recipients of the EirGrid U20 Football Championship player of the year awards.

The Naomh Columba man caught the eye as Donegal, managed by Shaun Paul Barrett, reached the Ulster Under-20 final, losing out to Tyrone in the final back in March.

Having played a critical defensive role in keeping Dublin’s top scorers at bay in the All Ireland final, Galway captain Jack Glynn was the tournament’s standout player and has been named the 2020 EirGrid Under 20 Football Championship Player of the Year.

Galway Manager Donal Ó Fátharta has been named as the EirGrid Manager of the Year after leading his squad to provincial and All-Ireland victories.

This is the sixth year of the player awards and second year of the EirGrid Manager of The Year awards with the recipients being selected by the Gaelic Writers Association.

The awards are run by EirGrid to recognise the incredible talent, dedication and hard work displayed by those involved in this competition.

EirGrid, the state-owned company that is delivering a cleaner energy future for Ireland, has been a proud partner of the GAA since 2015 when it first began sponsoring the U21 Football All-Ireland Championship before the competition evolved into to U20 grade.

Galway’s efforts in the competition have been reflected with six players from the All-Ireland winning panel selected as worthy recipients of a 20 U20 award. These are Conor Flaherty, Jack Glynn, Conor Raftery, Paul Kelly, Matthew Tierney and Tommo Culhane.