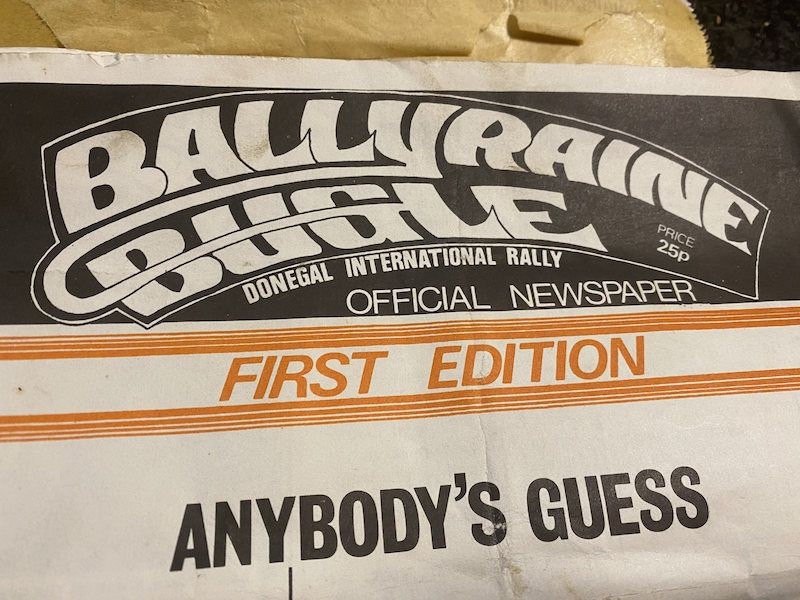 I was like a big wane waiting on the arrival of my offer of a 78 ‘first edition’ on Monday morning..

The names, the old sounds, that tingling feeling was all there waiting in anticipation.

On Saturday evening I got a message online from a good friend wondering If I had a good home for a 78 first edition.

I tried to remain calm as we communicated across the web. Social distance in place, the agreement was to drop it in the letterbox on their way to work on Monday morning.

In the meantime, they sent me an image of the front cover which churned out more memories as I waited the arrival of the original. 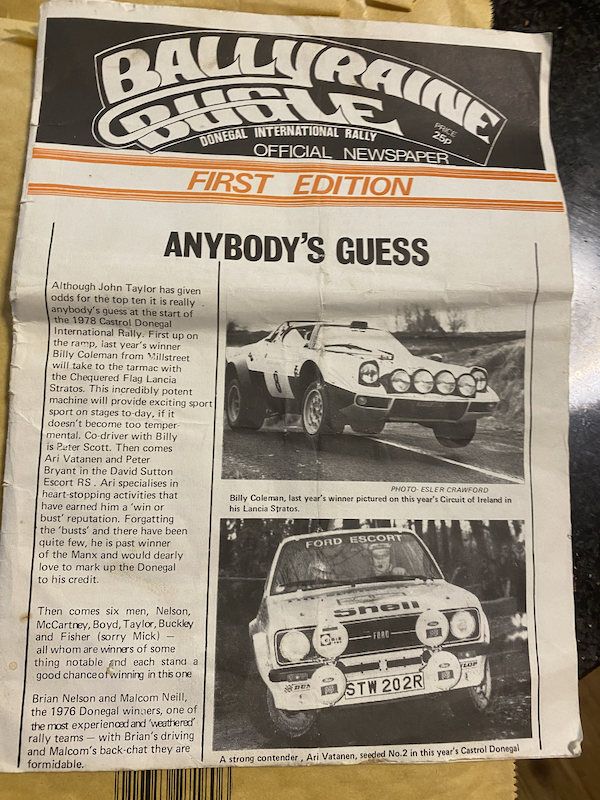 My friend first found this when they were a very young child out for a walk in a field one evening many years ago.

Now many years later they came across it in the present lockdown in a spring cleaning attack into the attic where it was uncovered.

A ’78’ can mean different things to different people. The 78 that I am tuned into this week moved a bit faster than 78 revolutions per minute (RPMs) and was music of a very different kind.

The top dogs parked up along the hedge on the town side, noses pointing out, cars all tilted in contours of the field down to the back of the hotel.

361 days of the year this was just a field but for four days in June it was a place of dreams.

For the longest time, I thought the name Parc Ferme was created by the Donegal Motor Club especially for the field behind the Ballyraine Hotel. 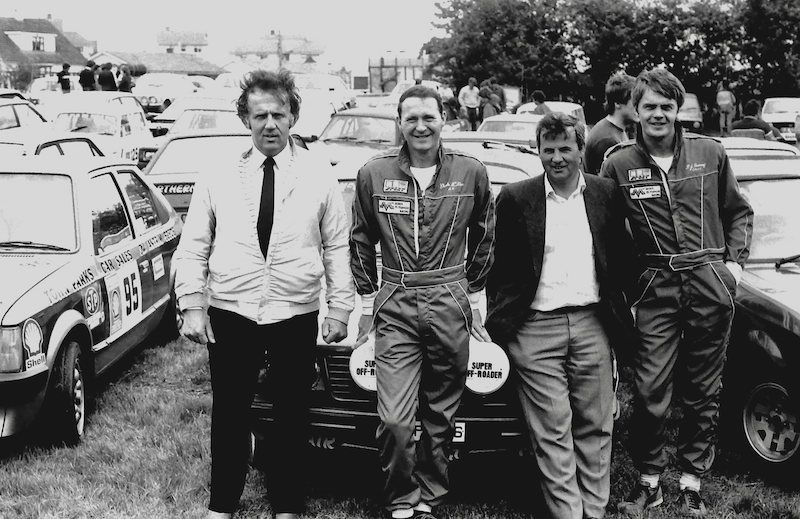 This was my place of dreams long before I was allowed to go to watch the Donegal International Rally.

Parc Fermé was packed in evenings after each day of the Donegal rally as the rally cars retired for the evening, local and international and future world champions drivers, were all the same as they flattened the grass together in a field at the back of the Ballyraine hotel. 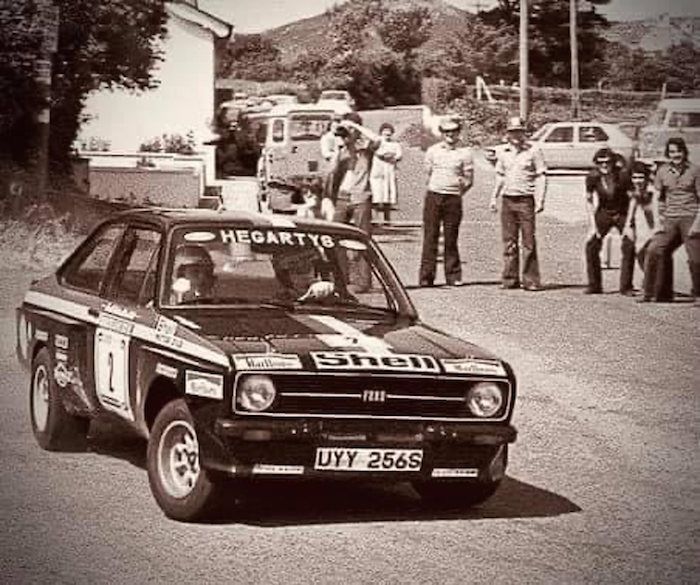 Are Vatanen and Peter Bryant in action of the Donegal in 1978. (Picture Hegartys Ford)

My friend this young child found this ‘78′ first edition of the Ballyraine Bugle laying in the field covered in dust as they walked around with their father looking at Rally cars on a summers evening in 1978. They have held on to this for all these years. What they found was a first edition of the Ballyraine Bugle for the 1978 event, the first of 5 eight-page editions that would be produced on site in the back of a mobile unit over that weekend in June of the Donegal Rally.

This old Ballyraine Bugle called out of great, great days. Reading it just reminded me of how far ahead of its time this hot off the press publication was (in every sense of the word ).

It was the precursor to Brian and Liz Patterson rally bulletins and also the seed from where RPM was developed with Alan Tyndall the voice of Donegal at the start and finish ramps and lit up town stages of Ramelton and Letterkenny in those days. 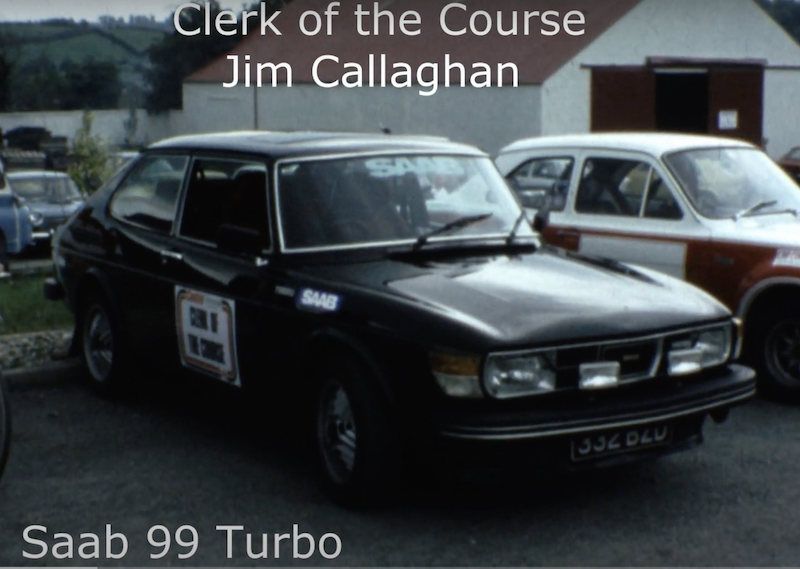 Jim Callaghan, Clerke of the Course Saab Turbo ready to go at the start of the Donegal International Rally in 1978. Photo Seamus Hannigan.

Brian never needing to Google anything with his knowledge of his sport echoing through the streets before the cars arrived. Both the late Brian Patterson, his wife Liz, photographer the late Esler Crawford along with Alan Plum Tyndall were part of a team that made their home in Donegal on the weekend of the rally to produce this very popular publication.

Costing 25p at the time the Ballyraine Bugle had everything from previewing the event like in this first edition which would come out on the Friday evening with a later edition coming out that night which would have everything from photos from the day to reports of the thrills and spills and the top 20 positions.

These were the days before digital photography when people like Esler Crawford had to rush back. From the stages on, get into some sort of a makeshift darkroom to develop 35m blackened white film, wait for it to dry then start and print photos to meet the deadline of five editions of the Ballyraine Bugle that weekend. 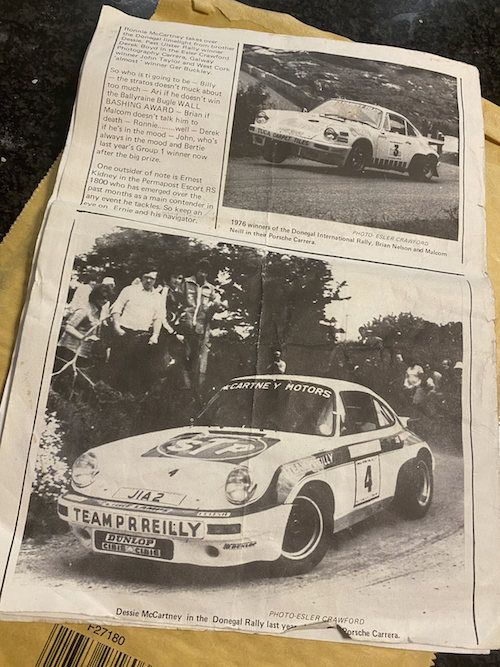 In this programme, it previewed the top six drivers for the 1978 Donegal Rally starting with the previous years winner Billy Coleman and his winning Chequered Flag Lanica Stratos who was seeded at No 1. At No 2 the future World Rally Champion Ari Vatanen, who was back in Donegal for the second time now in his David Sutton prepared RS 1800.
At No 3 ex European single-seater driver and previous winner Brian Nelson who would compete in his Tuca Tile Porsche. Ronnie Mc Cartney Derek Boyd and John Taylor finished off the top 6. 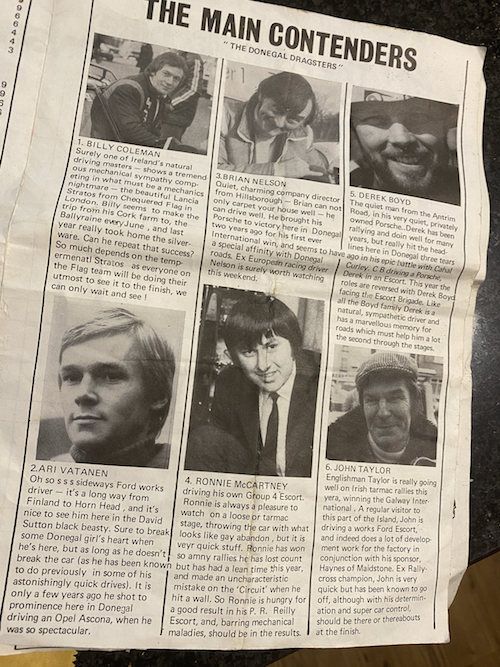 The Bugle even gave odds on possible winners

The 1978 Bugle even had a celebrity and personality bit of fun Non- starter’s list like car no 192 Angela Rippon and Angela Ford non-starter and the reason – no news, 194 John, (don’t mention the war) , nonstarter- Fawlty Car 196, and Dolly Pardon (non starter) and the reason – oversized front arches!

Portsdale is now the name of a quiet residential cul-de-sac which sits on the site that once was that famous Parc Ferme.

As a young boy growing up I cycled out to the Ballyraine and watched these amazing machine line up after a days rallying, their engines muffled slightly as the made their way up the field. Gearboxes and diffs whining the smell of Castrol R from minis, dehydrated drivers from Donegal Summers, battle scars local heroes’ bags of chips with loads of salt and vinegar. 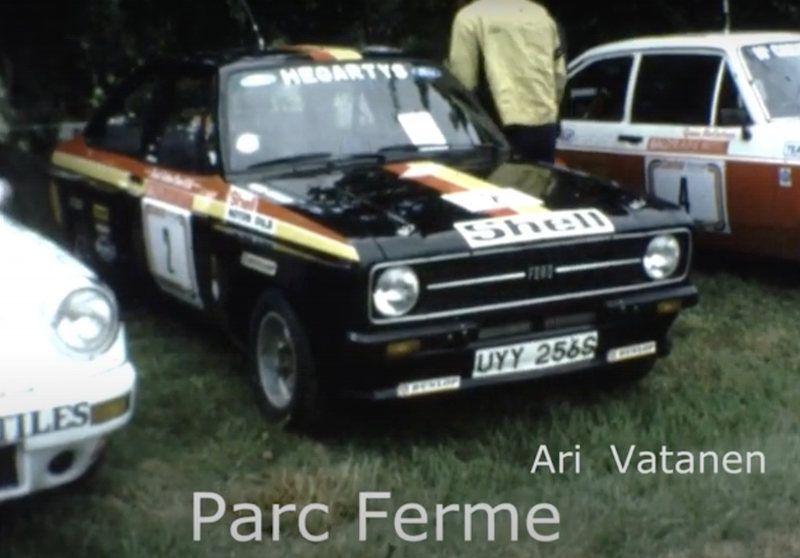 One year doing a summer job with our local milkman Paddy Ferry we made extra deliveries of milk to the Ballyraine Hotel. Danny and Laurence Mc Connell, Paddy Ferry and myself took an early morning break from delivering triangle shape cartons of Donegal Creamery milk to walk through Parc Ferme at the back of the hotel and look around the cream of rally machinery sitting in a Donegal morning dew.

The 1978 First Edition Ballyraine Bugle wasn’t far off the mark. The Stratos that won the rally in 1977 wasn’t at the races in ‘78. It could have been anybody’s game but it was Ari Vatanen who gave Donegal three days of the best rallying ever. It was the first rally I ever went to watch.

I’ll never forget even the bravest of rally fans all step back on the first stage I seen this flying fin (Vatanen) in action, coming over the brow of a hill at full tilt down into a ninety right with a flow and a slide and me mistakenly thinking I was watching Vatanen at work but Ireally was watching his navigator Peter Bryant holding on to the grab handle on the roof as Vatanen controlled the left-hand drive black beauty that was his RS1800 to a famous victory in the history of Donegal. 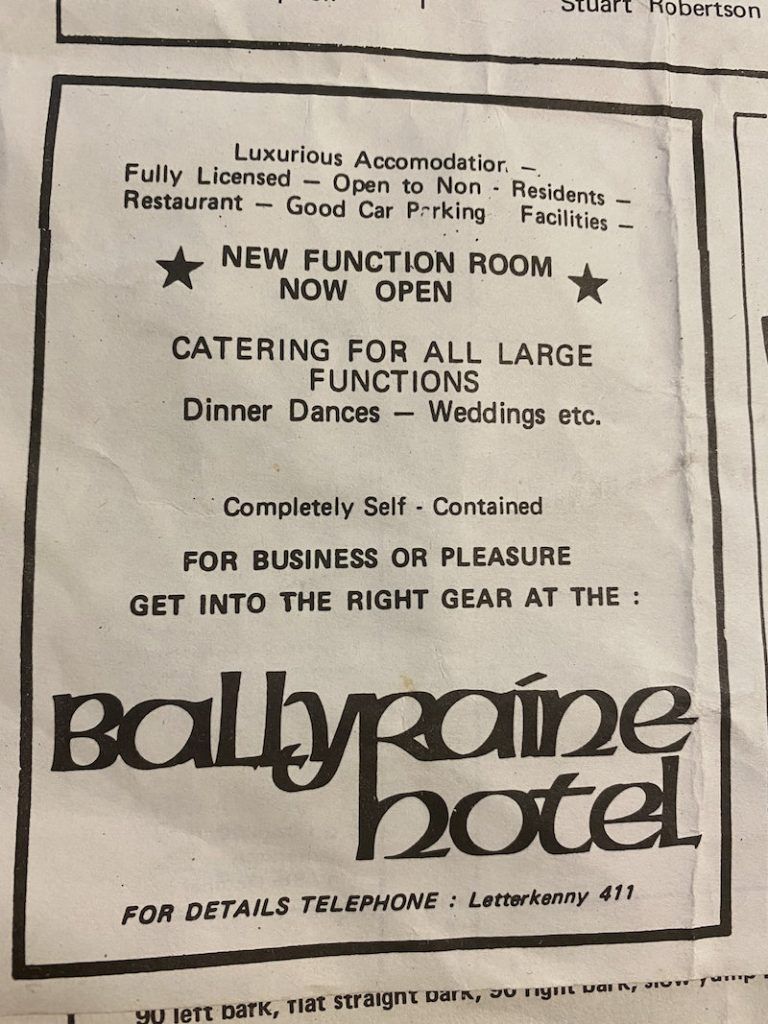 Also included in this week are two documents that Andrew Hegarty found in these lockdown in old files in Hegartys Ford garage, of some of the planning for Ari Vatanen arrival to Donegal in 1978, who was sponsored by Local Ford Dealer Hegarty Auto Services as the were called then by Andy Hegarty Senior for £500. Ford also arrange courtesy cars for Ari Vatanen (Ford Escort) and David Richards (Ford Cortina) and Accommodation booking Fee £15 in the Shandon Hotel 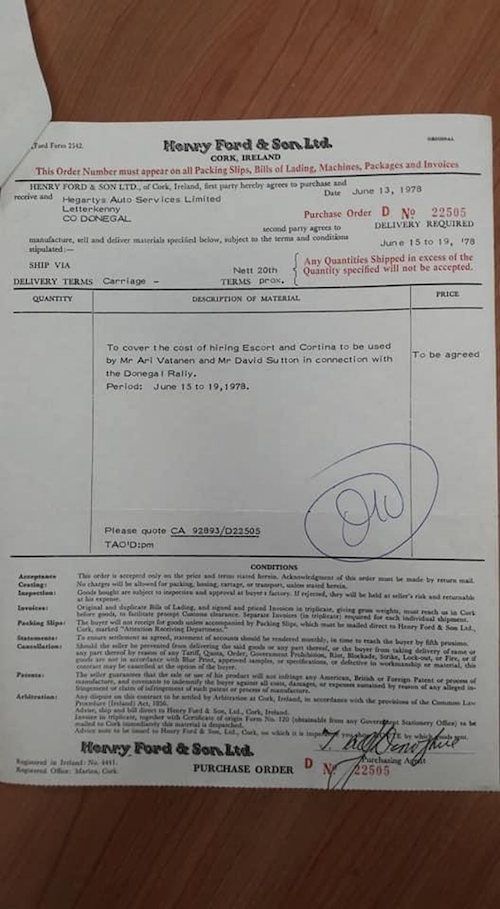 A letter from Ford of Ireland confirming car hire for Ari Vatanen (Escort) and David Richards (Cortina) for the Donegal Rally. (Courtesy of Hegarty Ford)