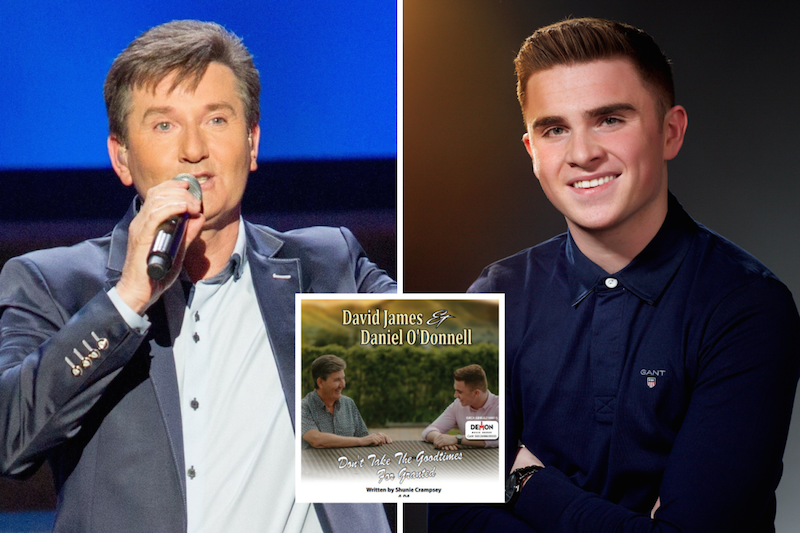 Donegal singer Daniel O’Donnell and David James are certainly enjoying the ‘good times’ as this weekend the video of their brand-new duet ‘Don’t Take the Good Times for Granted’ hit over one million views.

The video also racked up an impressive 500,000 views on David James’ Facebook page, bringing the number of hits to a grand total of 1.7million!

The new track ‘Don’t Take the Good Times For Granted’ was released Friday 29th January on the DMG TV label. The video was made by Shane Doyle of the Garage Project.

Written by singer-songwriter Shunie Crampsey, the song is a conversation between a younger man and an older man and is fitting for the times we find ourselves in.

The young man is quite anxious about life and asks the older man for his advice which is “don’t take the good times for granted”.

The pairing of Daniel’s well-loved vocals with David’s powerful delivery makes this a track for fans of all ages, with a message that resonates with us all in light of the last year.

Daniel said: “I am delighted with the reaction to the video online – it is great to see so many people are enjoying the new song. It was good to have been able to get together with David James to record this duet – I think he has a great future ahead of him in the music business. Thanks also to Shunie Crampsey for writing the song, he is a fantastic songwriter.”

Up-and-coming star David James has been going from strength to strength in the music scene since he started gigging at the young age of 15. With four singles that have topped the iTunes charts under his belt to date, including the track Donegal Doll released when David was just 18, he has also performed for some very well-known faces including The Duke and Duchess of Sussex, Prince Harry and Meghan Markle during their March 2018 visit to Northern Ireland at the Eikon Exhibition Centre, only a few weeks before their wedding.

While David predominantly sings Irish and country music, he has a wide range of musical tastes and influences, performing music from the likes of Tom Jones, music from the Rock and Roll era, musical theatre and power ballads.

David James said: “When we released the video I had said to my parents, ‘it would be great if it reaches 100,000 hits’. Half a million would have been unbelievable. The fact that it got to one million in just three days has left me speechless!”

‘Don’t Take the Good Times for Granted’ is out now, available for download on iTunes and to stream on Spotify now.