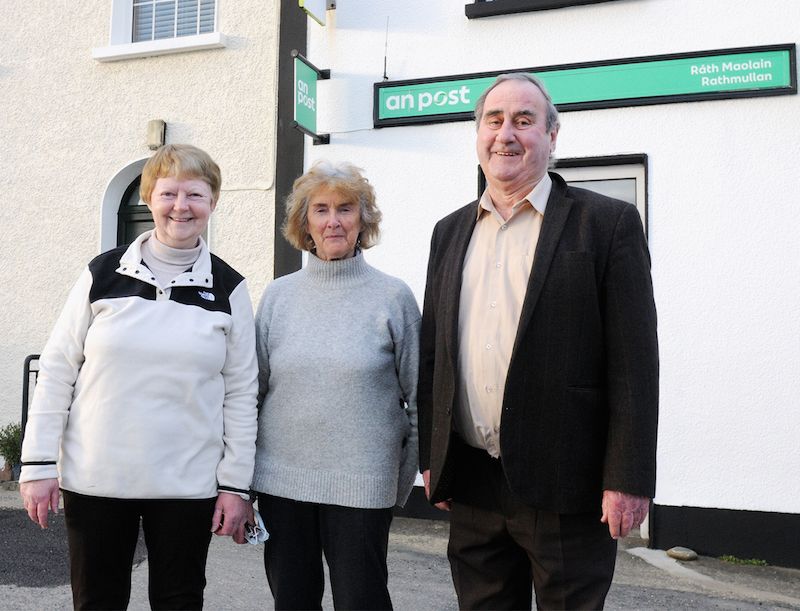 A special milestone has been reached in Rathmullan as the local Post Office celebrates 50 years under its current owners.

John and Bernadette Kelly run what has got to be the post office with Ireland’s finest view on Rathmullan’s Main Street overlooking the expanse of Lough Swilly and the Inishowen Hills.

There have been many changes down those fifty years but the real constant of service is in the welcome that customers get… along with many a fine yarn in a picturesque building that previously was Ferguson’s Pub. Today it remains the popular community hub as it has always been. John and Bernadette run the office with their assistant, Angela Crerand.

The Main Street has always been home to the post office in the town. In former times it was run by Tommy Carr from his home close to its current location.

Angela explains that they have seen many changes over the last five decades.

She explained: “The post office has been here since the 14th of February 1971: that was when John and Bernie took over. That is when I started as well. There have been a lot of changes in that time. I suppose one of the main ones was that when they took over, the phones were still not automatic

“Back then it was a 24 hour service on the switchboard and the exchange. Really, there weren’t that many phones in the area at that time – maybe 40 or 50. It was busy, especially when the fishing boats used to come when the mackerel trading was going on here in the early 1980’s, it was very busy then.

“That all changed in 1983 when everything went automatic. That changed many things and it sort of lost the personal touch I felt, when we used to deal with people on the phone. Back then the counter was all manual and everything was added by hand. Then the counter was computerised and now all the services are done by computer – things like banking, Billpay etc that is all new. It has all changed but some things are for the better as well.”

Despite the arrival of all this new technology she says they still enjoy a host of regular patrons who call in each week for a range of services from pension collection to parcel posting.

“We still have a lot of regulars and people call in each week. It is still pretty busy, especially since Covid came. The postage side of it has gone very busy because of online shopping and people returning parcels and one thing and another.

“Letter post has gone down in that time but parcel posts have probably trebled. It is hard to know what will happen in the future but I think post offices in towns like Rathmullan will probably survive,” she added.

She said the post office has served many people in the locality as well as many visitors to the seaside town and she recalls a few famous faces calling in over the years.

“The time ‘The Hanging Gale’ was being made, many of the actors stayed in Rathmullan. There weren’t that many phones out in the country areas at the time they used to come in to make calls back to London and places like that so there have been a few celebrities with us over the years,” she added.

John Kelly said the last 50 years have flown by.

“That time has flown by and it is only when you have something like this to look back on, after 50 years, that you realised it has gone by so quickly,” he stated.

He paid tribute to Angela for the role she played in helping run the post office having been there since they took over the business.

A short film marking the 50th year of the local post office in the town has been made called
“The Story of Our Post Office: 50 Years” and will be screened at this year’s Rathmullan Film Festival.

The film is part of the “Rathmullan On Screen” catalogue of short and feature documentaries made by local people and can be watched for free from 18-21 February 18th to 21st.