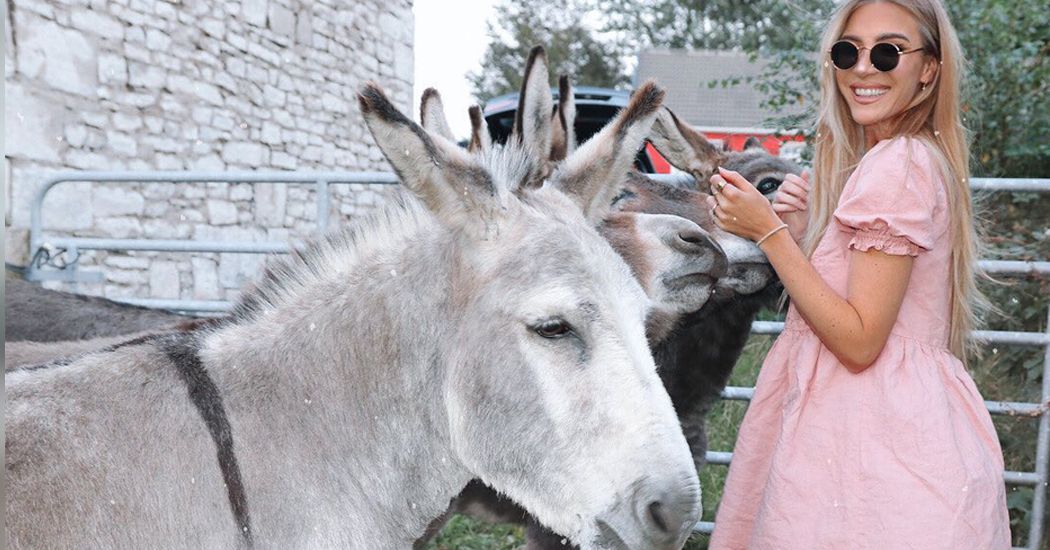 A Donegal-based influencer has launched a major giveaway to raise vital funds for the Donegal Donkey Sanctuary.

Stephanie Lange is this month appealing to her 213,000 Instagram followers and 1.2 million YouTube subscribers worldwide to help the sanctuary at a time of great need.

Stephanie who is originally from Australia, is a popular beauty blogger, YouTuber and an animal lover. Now living in South Donegal with her fiancé and their toddler son, their family comprises four dogs and four rescue donkeys of their own.

Stephanie was so inspired by the kindness and support she received from Donegal Donkey Sanctuary owners Danny and Sandra Curran that she wanted to do something give back.

The Donegal Donkey Sanctuary has again fallen on hard times as they care for 98 donkeys on limited funds while closed to visitors.

In a bid to help out, Stephanie has launched a GoFundMe appeal alongside a major beauty and fashion giveaway. Anyone who donates to the cause and comments on this Instagram post (click here) will be in with a chance of winning over $1,000 in makeup and a vintage Dior ‘Lady Dior’ handbag.

Speaking to Donegal Daily/Donegal Woman, Stephanie said she hopes she can use her platform for good.

“When we first adopted our donkeys we didn’t really have any idea how to properly look after them so Danny and Sandra were really good to us. We went to visit them and check out their sanctuary. They were a great help and great resource to us when we had things go wrong,” she said.

Stephanie and her partner Darren Mc Brearty, who is from Donegal, first began caring for four donkeys in Galway. The animals originally belonged to their landlord.

“He was a lovely man who didn’t really have the resources to be looking after them. We took over that duty. Then when we moved to Donegal, we thought we can’t just leave them. So we took them up and they are currently on our friend’s land,” Stephanie said.

The four donkeys are named Jack, Sonny, Lady and Furby (first baby), and the couple’s adoption journey has been well supported by their online followers.

“If I have a question on donkeys, you’d be surprised how many people have donkeys or horses and helped me out,” she said.

The GoFundMe appeal and competition is a win-win, Stephanie said, as donors get to help out a charity and also be in with a chance to win a top prize pack.

“The giveaway will run until the end of the month. I am hoping this will get the word out about good work the Donegal Donkey Sanctuary does for donkeys in need. They are struggling to feed, house and pay for vet bills for the donkeys. They are struggling financially, because they’ve not been able to have visitors for almost a year. Their visitors in the summer would be how they generated funds for the upkeep of the donkeys.

“I know everybody is getting it tough, even if people could spare five euro or less it all adds up.”

For Stephanie, life in lockdown in Donegal hasn’t been too much of a change, as the work of an influencer is rooted in the online world. She continues to update her followers on daily family life, while caring for her son, getting back into the groove of making YouTube videos, and working on a book on self-confidence in the world of social media.

“I’ve always loved Donegal. I have to admit I have felt a bit homesick for Australia since having my son, but you can’t beat Donegal. It’s the most beautiful place,” she said.