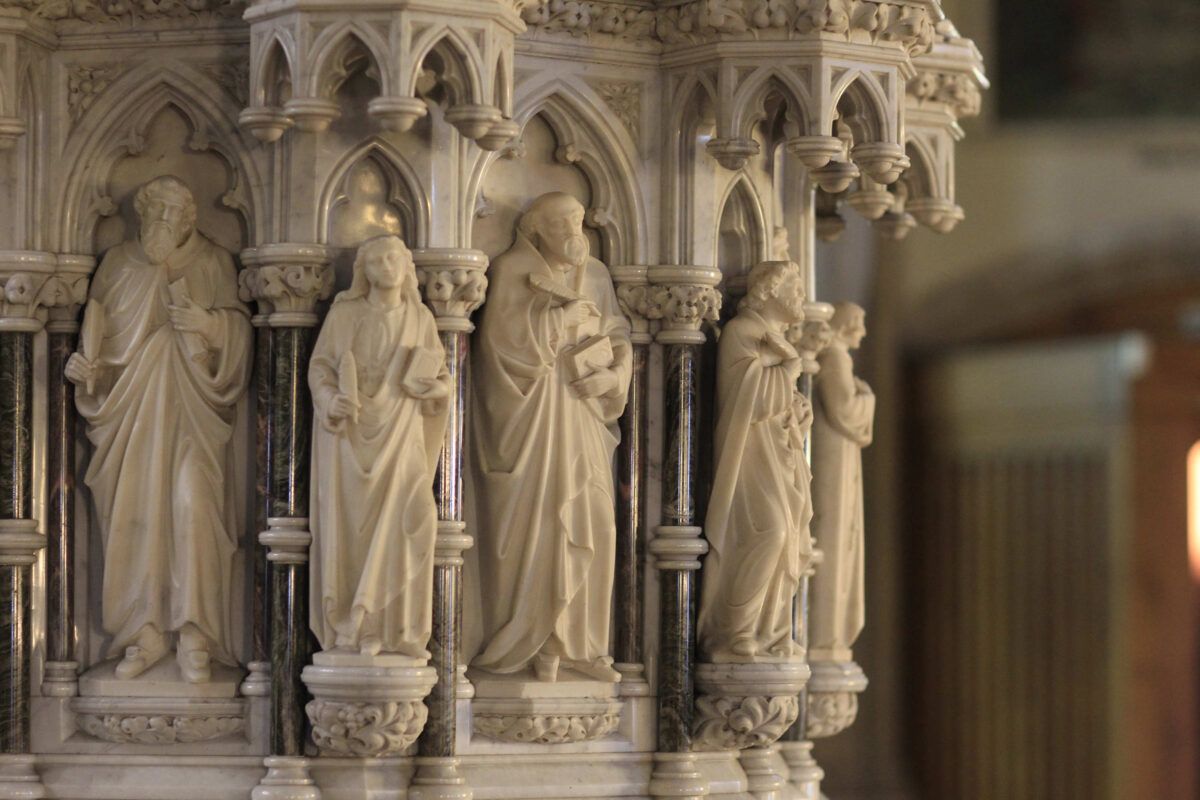 Robert Geldof was a commercial traveller for Holroyd and Jones, a company based in Capel Street in Dublin.

He was a regular in the Railway Tavern in Letterkenny when his work took him to Donegal. That was back when brothers Jack and Curley Doherty owned the Tavern, just  beside the station.

Local businessmen and brothers, Vincent and Dermot Rainey would join Mr Geldof after work for a glass of Guinness.

This was just one of the nuggets of priceless local history that was shared online by Dermot Rainey, the present day generation of the Rainey family in Letterkenny.

Dermot posted a picture of the railway tracks being lifted at what once was known as the Railway Road, with a suggestion of street name change in Letterkenny from the Pearse Rd in Letterkenny 2040.

‘Geldof Street’ has a beautiful ring to it, called after the famous father in the Boomtown Rats lead singer also called Robert, better known as Bob. But that’s not the reason for this journey. 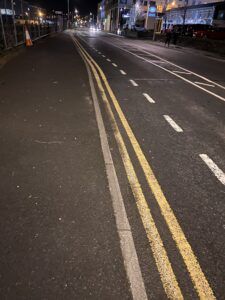 The cycling lane along the Pearse Rd which is wider than the three foot track it took for the railway to travel along this same route out of Letterkenny to Burtonport. Photo Brian McDaid.

I have a frustrating dislike for surveys. So I had to bite my tongue and filled out the Letterkenny 2040 online survey, a regeneration plan for letterkenny.

‘The whole country is banjaxed,  never mind Letterkenny’ was a recent reply from someone from Letterkenny when I told them I filled out the form.

There’s just a week or so left to have your view as a member of the public on this first phase  to record your ideas, likes and dislike for the regeneration of Letterkenny which is part of a national regeneration plan for Ireland 2040.

I kind of did this back to front in that I filled out the form first, and then ended up going out on a wee search of old landmarks in Letterkenny.

This is the story of two pieces of craftsmanship which are still with us today, finished over a hundred years ago, well made for the town of Letterkenny.

Both were made by the  same trade of its time, cut in stone, both for two very different jobs but both for the people of Letterkenny and further afield. 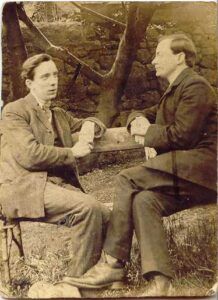 Willie and Padraig Pearse who worked the marble pulpit and altar rails in St Eunans Cathedral.

The first was by two brothers, who came to Letterkenny to put the final touches to what was one of the finest pieces of workmanship of its day, the pulpit and the altar rails of the then newly built cathedral. It was their father, James Pearse, who had the commission to do the work but he died suddenly on a visit to England. However, his two sons Willie and Patrick travelled from Dublin to finish the Letterkenny contract.

Willle Pearse was the craftsman who supervised the work on the commission and his older brother, Padraig, did extensive research on the sculptures.

This week I photographed these, and the light falling on that white Sicilian Marble shows the detail and the research that both these talented young men looked after on behalf of their father at St. Eunan’s Cathedral.

The Pearse brothers were  more famous for their part in the Easter rising. Both were executed after the 1916 rising, one day apart, on the 3rd and 4th of May in Kilmainham Gaol. 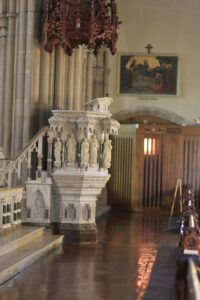 The fine details in cut in marble of the pulpit and altar rails in St. Eunan’s Cathedral by William and Patrick Pearse Photo Brian McDaid. 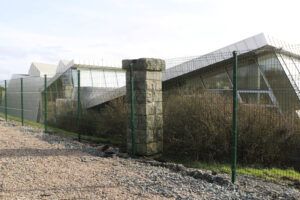 The second piece of workmanship is still on show in Letterkenny – that’s if you can find it!

It was moved a good few years ago to what then was one of the first town parks and play areas in Letterkenny, down beside the former Letterkenny Swimming pool on High Road. It’s the gatepost from the No 1 Gatehouse which once stood on the Letterkenny To Burtonport Railway line, at the junction at the bottom of Rosemount Rd and Pearse Rd.

This was the home of the Fisher family who were the gatehouse keepers, always on duty to have the gates ready for the train passing.

There were also stories of hard times, when the Fisher children followed a loaded down coal carriage up the track with wee buckets to collect coal that fell off to provide a fire and cooking for their family.

Today a traffic island and traffic lights stand where the Fisher home once stood.

One of the children from that gatehouse, Victor, went on to become a local business man, an  Urban District Councillor and Mayor of Letterkenny. And only for him and people of similar belief in the town’s history, this old gatepost could have ended up in landfill never to be seen again.

This Railway gatepost has now ended up tucked in behind the Regional Cultural Centre and at the back for the new Letterkenny Courthouse and the Letterkenny Tennis club. 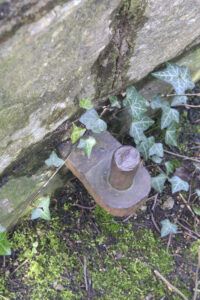 The massive railway gate hinge still in place on the gatepost carrying traces of years of wear and also tracks of the hammer that made it. Photo Brian McDaid.

Beautifully made and standing around ten feet tall. It was cut in solid granite stone, some of which still have the tracks of the chisels where the stone was spit and shaped by hand of the stone mason.

Its coping at the top is made of the same stone, cut bigger with a perfect overhang. Even the massive bottom hinge is still in place. Under the rust you can see where the heavy gate wore into the metal over years of use.

The pin of the gate still has a few shapes of a blacksmith’s hammer from where it was battered into place. 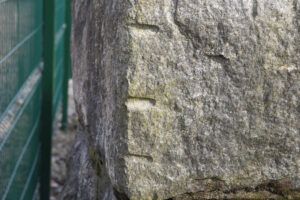 The tracks of chisel still on the stone on the old Gate post of No1 Gatehouse which now sits in the grounds of the Regional Cultural Centre. Which was one a green area in Letterkenny.

On a recent walk over what one was the old railway line, now called the Pearse Rd, I was caught in a shower of rain and the wind blowing. I felt like it could easily have been a night from over a hundred years ago when the train would have travelled up and down to Burtonport on this same piece of ground. The track was only three foot wide, narrower than the present day cycle lane that runs along the main road.

The transport of today sits on the red traffic light where the Fisher families old gatehouse once stood. It is where pedestrians now cross the road to walk between the old Letterkenny Main St and the retail parks on the newer, outer part of town.

There is no record today to tell us the names of who were the stonemasons that cut the stone on our lonely gatepost at the Cultural Centre. Nor do we know the names of people that worked on the building of the infrastructure that covered a lot of Donegal with the expansion of the railway to the outreaches of the county.

Of the parishes and its people that got work on the building of bridges, cutting into hillsides, which made a transport route to carry material to build stations, platforms, gate houses and crossings. And we do not know of the names of those who came to work on the railway and made Donegal their new home for life.

That’s where local knowledge comes in, memories of stories of the days of the train in Donegal carried down through generation to generation. Extra passenger carriages for fairways  pilgrimages from Derry to Doonwell to carriages carrying loads of fish from Burtonport. And loads of turf, when the line was reopened for a while in the 1940’s through the war, all passed by our wee gatepost on its way inland out of Letterkenny Station.

In the survey that I filled, I suggested the possibility of changing the name of Pearse Rd, believed to be named after the Pearse Brothers, back to its original name – Railway Rd.

This road runs from the Station Roundabout to the Station House Hotel, opposite the old Dunne’s Stores. It could serve as a great urban walkway or cycle along what was the route and start of the Letterkenny to Burtonport Railway Line. 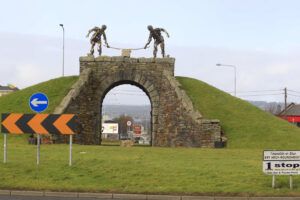 The Dry Arch Roundabout , a gateway to Letterkenny recalling the days when the railway was a big part of life in Letterkenny. Photo Brian McDaid.

I know this is highly unlikely to happen, but there’s a lot of local history and culture of the railway in Letterkenny that’s not tapped. If it was only to reinstate the old Railway gate post along the Pearse Rd near where the Fisher family lived in Gatehouse No1. It would also help explain to visitors why we have the beautiful Dry Arch Roundabout complete with its railway bridge as a gateway into Letterkenny and would keep us in touch with our transport of the past.

Please take the time to look online at Letterkenny 2040 and make your mark on your town for the future.

Letterkenny – a town once ‘cut in stone’ was last modified: February 25th, 2021 by Brian McDaid