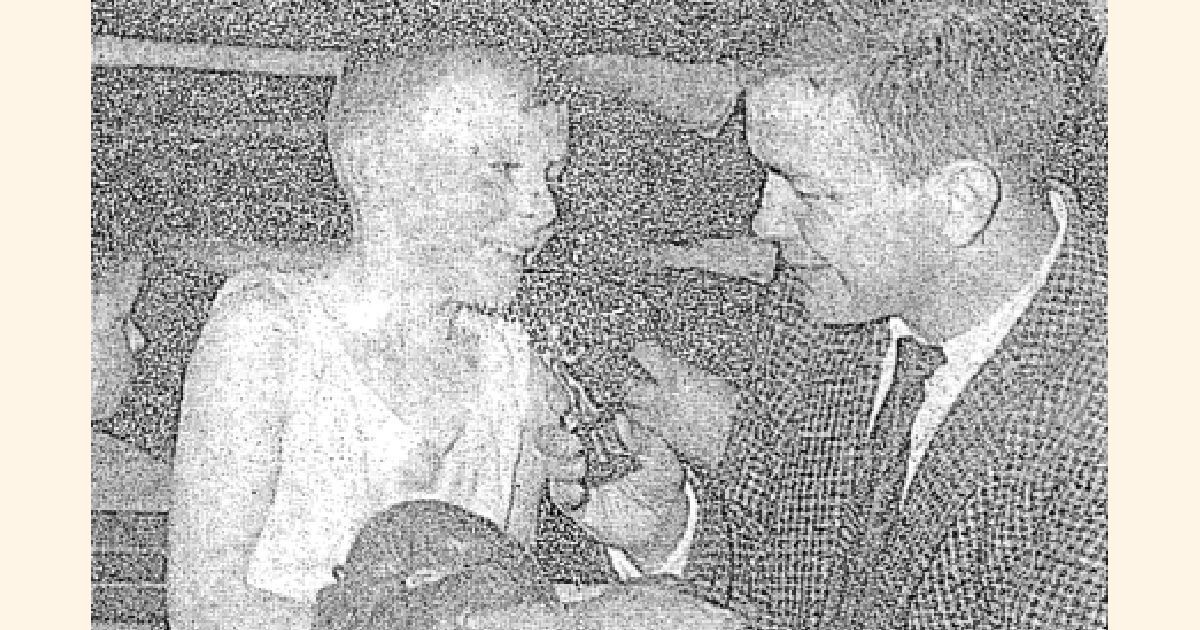 PATSY McGroarty from Ballyshannon won two Irish juvenile titles in the early 1960s – and had a unique distinction.

McGroarty, who hailed from Falcarragh Park in Ballyshannon, was known as Ireland’s smallest boxing champion.

He weighed just over three and a half stone and was described as ‘a tiny bundle of steel springs in constant lightening fast movement’.

Despite his weight deficiency, he rarely was at a disadvantage and he defeated O’Moore (East Meath) in the 4 stone final at the National Stadium in 1962.

‘Bobbing, weaving and ducking, he always puts on a great show, but it is his great fighting, do-or-die spirit that gets this great hearted little fighter the verdict each time,’ a report of the bout said.

The win over O’Moore was McGroarty’s second time to top the charts having won his first 4 stone crown a year earlier, in 1961.

The trio were honoured in Letterkenny at a supper.

The boxing fraternity used the occasion to their advantage. After all, it was a chance to talk up their corner.

“Boxing is at the forefront of sports in Donegal,” Ballyshannon trainer Michael Burke said. “No other is bringing home national and provincial honours regularly.”

Mr T McCarry of Letterkenny Urban District Council said the people of the Cathedral Town owed more to the club than they realised – and he urged local people to get involved.

CJ Kennedy, the County Donegal Boxing Board secretary added: “We have only four active clubs in the county where we should have twenty-four. I cannot understand why we have not more.”

In November ’61, McGroarty delighted a bumper crowd at the Devlin Hall in Letterkenny when  he overcame D Gallagher, also of Ballyshannon.

One ringside correspondent reported that McGroarty ‘not only won what must have been a very narrow decision…but threw in a song for good measure.’

‘A highly-entertaining affair all round,’ was the verdict.

McGroarty was on the bill when a North of England select defeated a North of Ireland selection at the Four Masters Cinema in Donegal Town in October 1962.

McGroarty lost to Charlie Nash – the future European and British champion – in one of two support bouts with Ballyshannon’s Paddy Doherty overcoming E Duffy from Derry in the other.

Five of the eight fights ended inside the distance.

John Hanna fought in the Ulster final the previous night and squared up to Liverpool native Brian McCaffrey, the English Northern Counties champion. The strain began to show on Hanna as the fight wore on and McCaffrey took a unanimous decision.

There was huge disappointment as Letterkenny’s national champion Jack McLaughlin was left with no fight as his scheduled opponent, Tony Shields (Derry), failed to show up.

The night was, notable, too as two men who would give sterling service to Donegal boxing met in one of the fights.

Letterkenny’s Gerry Daly made his debut against Gerry Lally of Ballsyshannon. Daly sent Lally ’shooting to the canvas’ but it was Lally ‘who was in control of the bout most of the time after that’ – and he scored a second round stoppage.

The final fight of the night saw Letterkenny’s George McLaughlin stopped by Dan Friel (Derry) in the first round. McLaughlin was down early after a huge punch from Friel. ‘In came Friel again,’ a report said, ‘and this time McLaughlin took the full count. Many of the crowd had left the hall before he was allowed to leave the ring.’

The above passage is an extract from the new book Donegal Boxing: A History, which is available to order now. Written by Donegal Daily/Donegal Sport Hub Sports Editor, Chris McNulty, Donegal Boxing: A History charts the history of the sport in the county and, for the first time ever, includes a full list of Donegal’s champions. Books cost €20 +p&p and are available to order ONLY from www.donegalboxinghistory.com