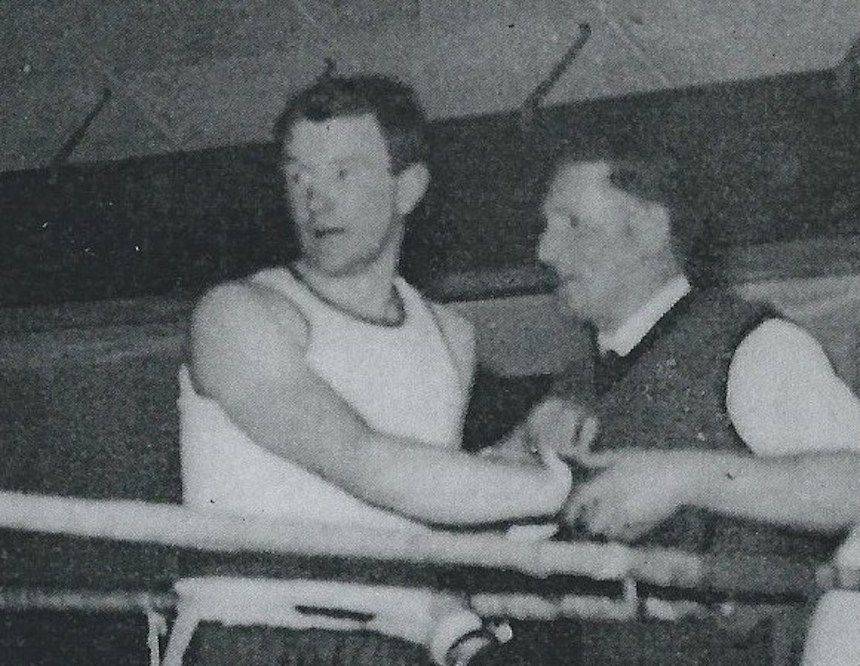 BOXING was growing in popularity throughout Donegal, with clubs in Buncrana, Ballyshannon, Letterkenny, Ballybofey, Donegal Town and the Rosses all to the fore.

The sport needed an organised structure – and got it on September 5, 1950, at the Boxing Championships of Donegal.

Picture: James ‘Jimmy’ Quinn (right) was later the Buncrana boxing training and he is pictured with boxer John Fair in the 1960s.

In the Mental Hospital Dining Hall, at St Conal’s in Letterkenny, what was described as ‘one of the largest crowds ever seen at a sporting fixture in the Letterkenny district’ was in attendance.

Boxers from clubs in Buncrana, Letterkenny, Donegal Town, Gweedore and the Rosses took part in Championships that were organised by Garda CJ Kennedy, James Molloy and Jim Callaghan.

The success of the night led those present from the affiliated clubs to take the decision to form a County Donegal Boxing Board – which was revealed at McFeely’s Restaurant at a function that night, when the cups and medals were presented by Dr JP McGinley.

As happened regularly in those days, the semi-finals were held on the same night, meaning boxers had two tough fights in a short space of time.

A quirk of fate saw the Quinn brothers from Buncrana reach the middleweight final.

John Quinn defeated J Patterson (Rosses) while James Quinn overcame H Boyle of Gweedore. Boyle was down for a count in the first, but lasted the three rounds, only for Quinn to out-punch him in the third to take the decision.

The brothers Quinn elected against squaring off against each other in the final.

Instead, the 1950 Donegal middleweight title was decided by a coin toss. James, the elder of the brothers – who later became an All-Ireland Army, FCA and Western Command champion – won the toss and the title.

Letterkenny puncher Charlie Collins was described as ‘the most scientific boxer on show’. He was said to have his opponent, J Hamilton, also of Letterkenny ‘bewildered for the full three rounds.’

A report from the night says that ‘a spate of punches in the third made the decision inevitable’ in the lightweight final.

G McCauley of Letterkenny stopped MG Gallagher from Buncrana in the third round of the welterweight final after McCauley stood up to a lot of punishment in the opening verse.

The footwork and speed of K Plunkett of Rosses, not to mention his ‘vigorous’ punching, were highlights of the featherweight final as he overcame T McCafferty from Letterkenny.

Thirteen nights later, at a meeting on Monday, September 18, 1950, the new County Donegal Boxing Board was formed.

The above passage is an extract from the new book Donegal Boxing: A History, which is available to order now. Written by Donegal Daily/Donegal Sport Hub Sports Editor, Chris McNulty, Donegal Boxing: A History charts the history of the sport in the county and, for the first time ever, includes a full list of Donegal’s champions. Books cost €20 +p&p and are available to order ONLY from www.donegalboxinghistory.com